Fifteen years ago, Mexico declared war on drugs. However, the country must still reflect on the factors that lead drug traffickers to engage in violence, and reconsider their strategy to break this long cycle of abuse, argues Karina García Reyes (University of Bristol).

Read this article in Spanish

Recent studies show that Mexico is the fourth country with the highest rate of violence globally. Although the last administrations of Enrique Peña Nieto (2012-2018) and Andrés Manuel López Obrador (2018-2024) have tried to combat this phenomenon with a military strategy, they have not achieved the two main objectives of this war, namely to reduce trafficking and to lower the homicides, kidnappings and disappearances. Mexico remains the world leader in the production and trafficking of illegal drugs such as heroin, marijuana, methamphetamines and synthetic opioids such as fentanyl.

With these figures, it is clear that the strategy has failed. Hence, many people advocate for abandoning a prohibitionist paradigm and legalising drugs instead, which is an approach that I agree with, even though it does not provide a magic solution. Drug trafficking is only one of the various businesses involved in organised crime, which also profits from organ and arms trafficking and human trafficking, so we cannot expect a sharp reduction in violence in countries where these crimes occur.

But the most important aspect to consider in places like Mexico is identifying the systemic conditions which enable violence linked to organised crime to spread. There is no use in deploying the army on the streets if there are many children and young people who are willing to replace those who have been killed and die in combat if necessary. In this context, rather than using violence against the perpetrators, it is more relevant to understand their motivations and to design policies that interrupt this cycle of violence from its roots.

Reasons for choosing violence as a work option

Which factors determine drug traffickers to consider the option of killing, kidnapping and/or torture as a job option? I addressed this question in my doctoral dissertation by analysing 33 life stories of former drug traffickers by interviewing them in northern Mexico between October 2014 and January 2015.

In my analysis, I found that the participants had three common features. Most were victims of domestic violence, child abuse or domestic and gang violence, dropped out of school or were expelled before completing primary school, and had several suicide attempts.

In my book, Morir es un alivio (published in Spanish), I focus on a dozen of the more than thirty stories and share with readers one of the most important learnings from my research: the perpetrators’ desensitisation process was long and painful. Most of my interviewees were victims of appalling violence. The case of Cholo (not his real name) is one of the ones that had the greatest impact on me. Cholo was born and grew up in extreme poverty, and he told me that he and his 14 siblings almost starved to death. His father was an extremely violent and alcoholic man who beat him, his mother and his siblings daily.

Life was unbearable for Cholo, and he constantly asked God, “Why did you allow me to live like this?” As a teenager, tired of so much suffering, Cholo tried to kill his father and then “eat him in broth”, but he couldn’t. He stabbed him with a knife, but instead of killing him, Cholo burst into tears, and his father beat him until he broke his ribs. That time, Cholo decided to report him, but the local authorities ignored him. That was when the young man stopped trusting institutions, and a year later, he found protection by joining a well-known cartel in his city. As an adult, Cholo became one of the most violent hitmen in northern Mexico: “I liked seeing the blood, knocking out teeth, pulling out hair and scalp.”

As a result of the abuse he suffered, Ruperto believes that he grew up “with an inferiority complex and resentment for the condition in which we lived and to see that other people were happy…”

Ruperto’s (not his real name) childhood was also difficult. He did not know his father, and his mother was very violent; in the interview, he recalled how “she beat me with light cables, burned my hands, burned my feet and tied me up like a little animal to the leg of a bed with a chain.” Ruperto lived under these conditions until he was 7 when his uncle realised what was going on and took him to live with him. He had already been expelled from primary school for violent behaviour by then. As a result of the abuse he suffered, Ruperto believes that he grew up “with an inferiority complex and resentment for the condition in which we lived and to see that other people were happy…”

Ruperto is also aware that his uncle was not a good influence, although he did not beat him. He took him to help him in his illegal cannabis growing business, and that is how Ruperto got into drug trafficking as a child. At the age of 12, he was already addicted to cocaine and was already engaging in violent acts as a cartel member. At 18, he became the leader of his group because he dared to commit crimes that others could not. In the interview, he admitted that he liked to inflict pain on others as revenge for what he had suffered.

These stories help me illustrate three points that I believe are crucial to understanding violence in Mexico. First, gender-based violence and child abuse are perpetrated by structural violence, which is state neglect. Through institutions such as public schools and the DIF (National System for Integral Family Development), administrations systematically fail to intervene timely and prevent them.

Moreover, this violence, considered “micro” because it occurs in social spaces such as homes, schools, and neighbourhoods, is the key to understanding how “macro” violence, such as organised crime violence, is sustained.

Ultimately, these stories confirm that violent criminals are not born but made. To explain graphically how drug violence sustains itself, I use the example of an iceberg. Until now, through military strategy, governments have only focused on attacking the tip of the iceberg, ignoring the multiple forms of violence and socio-economic conditions that make it possible.

Suppose administrations redirect their resources to address and prevent the violence at the bottom of the iceberg. In that case, it will be possible to break the cycles of abuse and suffering that allow the workforce willing to work for organised crime.

Notes:
• Translation by María Clara Montoya
• The views expressed here are of the author rather than the Centre or the LSE
• Please read our Comments Policy before commenting
• Banner image: Pepe Rivera (CC BY-NC-SA 2.0) 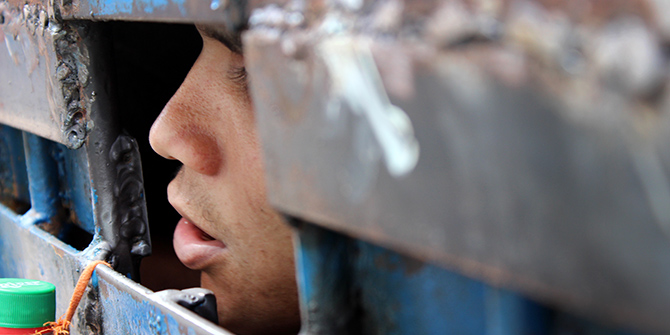 The Brazilian prison system is undermined by gaps in authority, incentives, and accountability