Serbia: is the freedom of the press endangered?

Serbia: is the freedom of the press endangered?

The devastating floods that hit the Balkans recently have put authorities under great pressure throughout the region. There are concerns, recently voiced by the OSCE, that the Serbian government has not responded to criticism with openness and transparency, instead trying to hush down voices of disapproval. Milica Popović goes through the suspected cases of censorship.

“It was the best of times, it was the worst of times…”. This Dickensian image would be a fitting reflection of the split opinions on how the Serbian government handled the disastrous floods that hit Serbia over the past weeks. Some (mostly the Government itself and most of traditional media outlets) would say it acted professionally and with dignity, while the others would point out that it showed complete dilettantism and improvised a lot of its actions during the emergency situation, at the same time endangering the freedom of the press.

A part of the public is particularly dissatisfied with the recent cases of censorship.

A blog post I, AV, am resigning (AV are initials standing for the Prime Minister Aleksandar Vučić) was removed shortly after it was published on the blog section on Blic’s website. Journalist Dragan Todorović published a text which in detail gave the arguments why the PM Vučić should resign, focusing on his failures during the emergency situation. 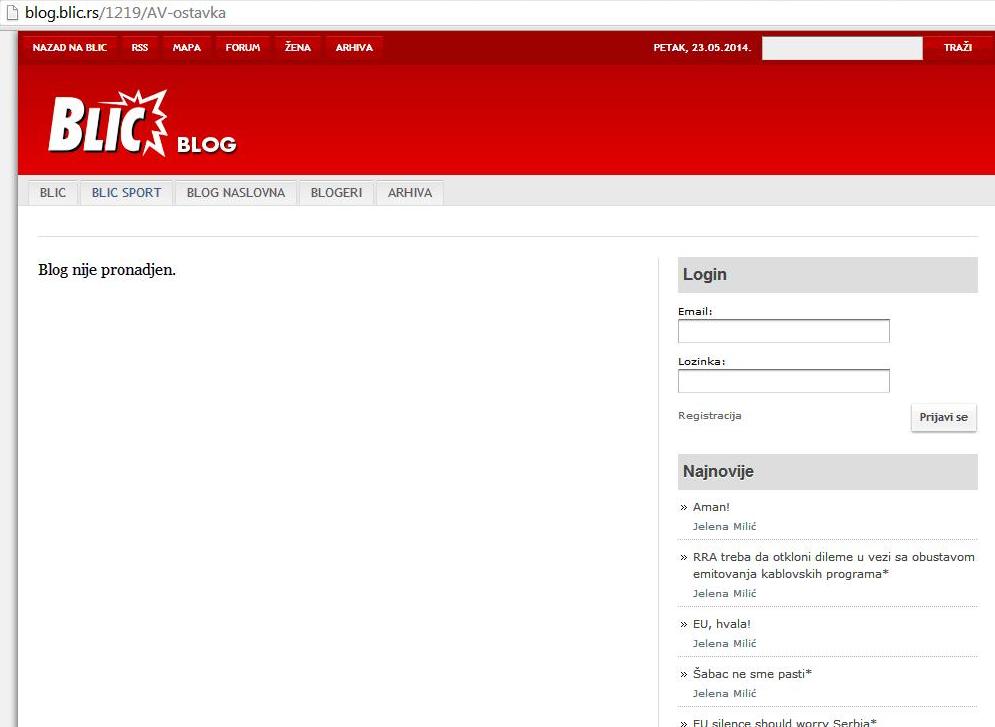 The website Teleprompter.rs was hacked and disabled for a while after publishing several texts about the PM (“Vučić’s CV: Censorship as a specialty” and “Appeal: Vučić to stop self-pity and being pathetic“).

Another blog was hacked because of a post entitled “Dear State, we wouldn’t take any more of your time“, which again lists the Government’s failures during the floods.

Only a day after the Ombudsman issued a statement maintaining that citizens are free to criticize and that the state has an obligation to protect criticism, not to repress it, the Parliament reduced the number of the Ombudsman’s researchers and associates by half.

Journalist Srdjan Škoro was transferred from his original job as desk chief at Večernje novosti daily newspapers to the sports section of the same media outlet – to report about sports, which he had never done before. This all happened after he, on the day the new Government took an oath in the Parliament, expressed some doubts about the PM’s choices for Ministers.

After numerous appeals against censorship, mostly by the online community, the OSCE reacted by issuing a statement defining the Government’s online censorship in Serbia as a worrying trend. PM Aleksandar Vučić replied that he ‘would not allow anyone, not even the OSCE, to attack Serbia’ and he asked for specific evidence for their accusations. He also challenged the media outlet Blic ‘to say if the Government censored the text [“I, AV, am resigning”], which was anyway idiotic.’ Commentary in the German press mirrored these concerns, writing that ‘during record floods, Vučić, with his authoritarian manners and show-programmes which were recorded non-stop by TV cameras, has spread panic, confused the authorities and increased chaos.’

Three people were detained for a week for spreading panic via social networks, because they commented on the number of dead people in flooded Obrenovac on their personal Facebook profiles. By way of contrast, there were no sanctions for tabloids splashing sensational headlines on their cover pages (‘Dead bodies floating in Obrenovac’, ‘Water worse than bombs’, ‘Flood is threatening Belgrade’). 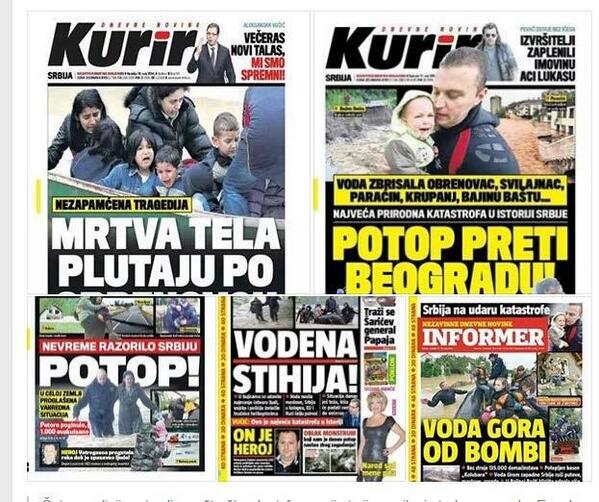 This detention could severely intimidate social network users and cause further self-censorship.

The latest suspected case of censorship, although not in direct connection to the floods, happened yesterday (Sunday, 01/06/2014), when Peščanik.net published an analysis of the PhD dissertation of Serbia’s Interior Minister Nebojša Stefanović (link to the English version of the text).

‘A detailed analysis of the dissertation reveals that Stefanović’s work is heavily plagiarized and for this and other reasons it fails to meet the criteria for a successful PhD.’ After this, the whole peščanik.net became inaccessible.

Lana Budimlić, producer at Peščanik.net, announced on twitter that the website’s inaccessibility was due to a Denial-of-service attack:

Asked what they thought about online actions taken to denounce censorship in Serbia, the Serbian embassies in the UK and US issued statements supporting freedom of expression (“all media play a key role in informing the public”, US embassy) and condemning censorship (“any attempt to curtail the freedom of the press and critical thinking on any topic of public interest is unacceptable”, UK embassy).

It is worth mentioning that in 1998 Mr. Vučić, as a Minister in Slobodan Milošević’s Government, led the implementation of the infamous Information Law, under which the editors of all opposition media had to run their content through Mr. Vučić before publication.

There is no solid evidence that PM Aleksandar Vučić himself, nor his immediate associates, are censoring the media. But it is all a matter of simple deduction. We are seeing the outcomes very clearly – media web pages and blog posts are being removed and hacked, and they all have only one thing in common – the critical tone towards the Government’s and PM’s actions.

Note:  This article gives the views of the author, and not the position of LSEE Research on SEE, nor of the London School of Economics.

Milica Popović is an analyst with PRpepper, a regional and global communications agency. She is based in Belgrade and her focus is on the politics of South Eastern Europe. You can find her on twitter @MimaPpvc.

The Brussels Agreement “generated by conversations, not by relentless pressure”

Serbia has a new government: Hurrah or maybe not?