The elections’ outcome will give HDZ a badly needed boost ahead of the more important parliamentary polls at the end of this year. Grabar-Kitarović could well use the presidency to score points on behalf of HDZ, especially with regard to the struggling economy, argues LSEE’s Dimitar Bechev discussing the results of the presidential race in Croatia.

It was a nail biting evening in Croatia, high on political drama.

As expected, the two competitors in the presidential race, the incumbent Ivo Josipović and Kolinda Grabar-Kitarović, were running neck to neck. Initial exit polls gave Grabar-Kitarović the edge but later on Josipović, backed by the ruling Social Democratic Party (SDP), came forward. He was soon see his advantage narrowing down as results from polling stations abroad were announced. It all ended with a photo finish, social media commentators noted, with Grabar-Kitarovic winning by 32,435 votes, or little less than 2% of the overall vote: the president-elect, supported by the centre-right Croatian Democratic Union (HDZ), garnered 50.74% of public support against 49.26% for Josipović.

The diaspora vote weighed in heavily, yet it did not quite decide the outcome

Up to 90% of Croatian citizens living abroad, including across the border in Herzegovina, have a strong preference for HDZ. They have supported the party loyally since the days of Franjo Tudjman, Croatia’s nationalist leader credited for independence from Yugoslavia and also winning in 1995 the so-called Homeland War (Domovinski rat) against separatist Serbs. Yet, one should not overlook the fact that even without the diaspora (a term which sits oddly with Croats in Bosnia and Herzegovina anyhow) Grabar-Kitarović would have carried the day by a razor-blade thin margin of 1,989 votes.

Even in urban areas which would typically back the left-liberal candidates Josipović underperformed. Compared to the presidential elections of 2009-10 he lost an estimated 50,000 votes in the capital Zagreb. Meanwhile HDZ improved its score from the first round finishing a very close second. Grabar-Kitarović overtook Josipović in Split and Osijek after trailing behind. Out of the big cities, only Rijeka remained loyal to the now ex-president, but even there he has performed worse than in 2009-10 (50.4% vs. 66.7% back then).

The campaign made a difference but only to a point

Josipović led a lackluster campaign, coming across as bookish and devoid of charisma. That is not necessarily a bad thing given Croatia’s turbulent past. Yet it was certainly a problem given that he, figuratively speaking, was forced to row against the tide.

As observed by the old Croatia hand Marcus Tanner, voters have punished the incumbent. Those who went for the radical activist Ivan Vilibor Sinčić, finishing third in the opening round with the respectable 16.4%, did not come to Josipović’s rescue, heeded the call to cast invalid ballots or did not make it to the polling stations. By contrast, Grabar-Kitarović succeeded in rallying the HDZ faithful promising to “start where Franjo Tudjman stopped” (the presidency has not been in HDZ’s hands since 1999) while also projecting a folksy image (“I was taking care of cows on the family farm as a child”) and highlighting economic hardship and rising poverty to broaden her appeal and woe centrists.

Both the HDZ and the governing SDP seem to have done their best to mobilise their respective voters. More than 59% made their way to the ballot boxes – the highest share in 15 years, as shown in the Chart below. 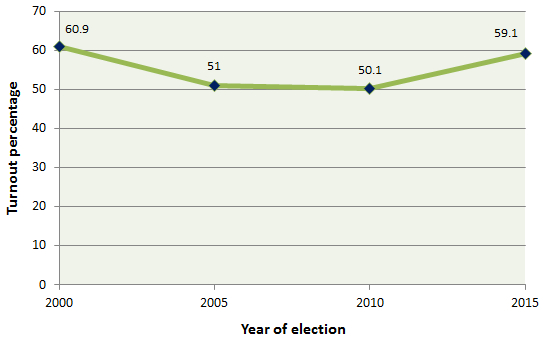 In comparison, 47.12% voted in the first round on 28 December, and 50.13% in the second round in 2010. There were reports about huge queues in Herzegovina’s main city of Mostar – and the deployment of special police to contain unrest. Both parties’ HQs were painfully aware of the narrow race and scrambled for each and every vote.

The elections’ outcome will give HDZ a badly needed boost ahead of the more important parliamentary polls at the end of this year. Grabar-Kitarović’s success contrasts with the party’s lackluster performance in 2009-10 when its candidate Andrija Hebrang, a scion of a prominent political family, failed to make it past the first round.

It is also a breath of fresh air given that Tomislav Karamarko, HDZ leader, has been consistently earning, according to surveys, the unenviable distinction of being the country’s most unpopular politician (Josipovic has been coming on top). As of last evening the centre-right opposition has wind in its sails. Grabar-Kitarović could well use the presidency to score points on behalf of HDZ, especially with regard to the struggling economy. Looking at some of the trends, Croatia, member of the EU since July 2013, reminds one of crisis-ridden Southern Europe, not the post-communist countries of Central and Eastern Europe. Its economy contracted for a sixth consecutive year in 2014. Kick-starting growth and tackling unemployment (17.7% nationally but close to 50% amongst youth) is very much the task of the cabinet as Croatia is a parliamentary republic. The president can have lots of air time to sway votes while carrying no direct responsibility.

There is also the prospect of in-fighting withing SDP as Josipović challenges Prime Minister Zoran Milanović for the leadership. Yet, HDZ’s ride to power won’t be as smooth. A year is a long time in politics, to bring in a cliché. One thing to watch is how smaller parties progress, including Sustainable Development for Croatia (ORaH, meaning walnut), an environmentalist party which did very strongly in the European Parliament elections in May last year. Sinčić’s success suggests there is scope for newcomers, in the mould of SYRIZA or Podemos, challenging the party-political status quo.

In foreign affairs where the president’s influence is more pronounced, there is concern that Grabar-Kitarović could turn back the clock on rapprochement with Serbia and start playing hardball with Brussels to please nationalist grassroots. Such prospects cannot be rejected. It is not inconceivable that Zagreb makes Serbia’s accession talks to the EU more difficult, or even vetoes certain chapters. Just as Slovenia did in the past towards Croatia.

However, it is not likely that Grabar-Kitarović’s win will lead up to Croatia mimicking its neighbour Hungary in picking fights with the EU. Her victory speech struck pro-Western notes, stressing relations with Germany as key. A former ambassador to Washington and until recently Assistant Secretary-General of NATO, she has good links with the US too. All that is certainly reassuring as far Croatia’s policy towards the countries of former Yugoslavia is concerned. Rather than going back to Tudjman’s days, Zagreb will continue to be a constructive player in the Balkans.

A slightly different version of this post was published on the EUROPP Blog.

Note: This article gives the views of the author, and not the position of LSEE Research on South Eastern Europe, nor of the London School of Economics.

Dimitar Bechev – LSEE Research on South Eastern Europe
Dimitar Bechev is a Visiting Fellow at LSEE-Research on South East Europe in the LSE’s European Institute. He also lectures in international politics at Sofia University and was formerly Director of the Sofia Office at the European Council on Foreign Relations (ECFR) where he covered Turkey and the Western Balkans.

The beginning of the end or the end of the beginning? A framework for understanding youth unemployment in Croatia