‘Give me a light that I may tread safely into the unknown.’

‘Go out into the darkness and put your hand into the Hand of God. That shall be to you better than light and safer than a known way.’

So I went forth, and finding the Hand of God, trod gladly into the night. And He led me towards the hills and the breaking of day in the lone East.

Spoken by George VI in his Christmas 1939 broadcast to the Empire these words struck a chord with a country facing the uncertainly of war. They were the preamble to an obscure poem, God Knows, written in 1908, but nobody was able to identify the poet.

Finally at midnight on Boxing Day the BBC announced that the author was Minnie Louise Haskins, a retired LSE academic. The poem was just a small part of a career which had encompassed working in India and the East End, industrial welfare and academia. 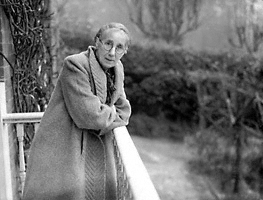 At the age of 43 Minnie Haskins came to LSE to study for the Social Science Certificate under Agatha Harrison, who had been appointed in 1917 to the first British academic post devoted to industrial welfare. After gaining the Certificate with distinction in 1919 she took the Diploma in Sociology, gaining a further distinction in 1920. From 1919 to 1939 she worked as a tutor in the Social Science Department where the senior tutor described her as:

A woman of unusual capacity and character … a rare understanding and sympathy and infinite patience, combined with a great deal of love and interest in people.

After her 1939 retirement Haskins returned to the School during the Second World War, finally retiring in 1944. She died in Kent and Sussex Hospital, Tunbridge Wells on 3 February 1957.

Her words live on, inscribed at the entrance to the George VI memorial chapel in St George’s Chapel, Windsor, and in a window at the Queen’s Chapel of the Savoy. The poem was read at the funeral of Elizabeth, the Queen Mother in 2002.

A mother and daughter at LSE – Herabai and Mithan Tata October 31st, 2018