From 1939 to 1945 LSE left Houghton Street in Westminster, for Trumpington Street in Cambridge – but the road to Cambridge was far from straightforward. LSE Archivist, Sue Donnelly, describes the year long search for a new home.

Five days after the Munich Agreement of 30 September 1938 LSE Director, Alexander Carr-Saunders, received a letter from the Principal of the University of London urging all London colleges to plan their teaching arrangements in the event of war. Planning intensified after February 1939 when the Lord Privy Seal asked the Committee of Vice-Chancellors and Principals to submit a scheme for inter- university co-operation believing that the London colleges should be evacuated from the capital freeing up buildings for government use. 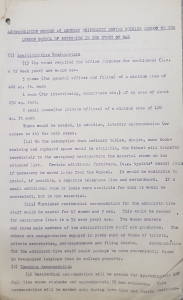 On 1 March 1939 Carr-Saunders reported to the Professorial Council that he had sent the Cabinet information about the availability of LSE staff and equipment for government use in the event of war. He was also authorised to approach Reading University to discuss war time arrangements.

“The Vice-Chancellor said that the wishes of the Colleges had been met as far as possible. I pointed out that as far as I could see, every College except our own had got more or less what it had asked for, but that we had been sent to Scotland whereas we had asked for Reading. I emphasised the extraordinary inconvenience of this, indeed I said it was more than inconvenient; it would seriously militate against keeping the School together in war time.”

Lord Stamp also wrote to the Vice Chancellor arguing that the arrangement would militate against plans to employ LSE staff on government service. The Principal of Glasgow University, Hector Hetherington, acknowledged LSE’s difficulties writing ruefully: “I am afraid it is a long journey”. 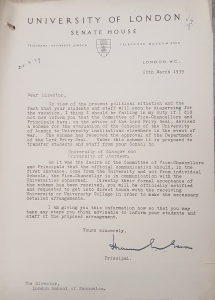 Carr-Saunders revived the plan of moving to Reading but the importance of Reading’s agricultural department meant that the government required significant space at Reading for land worker training.

In May 1939 the School received an approach from George Gordon, President of Magdalen College and Vice Chancellor of Oxford University, suggesting that Magdalen College could provide accommodation for LSE staff but not students. In particular accommodation for women students was a problem.  “They cannot be housed in Magdalen” wrote Gordon.  Oxford could only be an administrative centre and there was some concern about housing LSE’s women administrators. It was also apparent that the government also required accommodation in Oxford.

Help came in the form of Sir Patrick Duff, the civil servant heading up the Ministry of Works who was willing to approach Cambridge on behalf of LSE. Duff wrote to Carr-Saunders:

“I am sorry we had to disturb your proposed Oxford allocation but the accommodation position is a little complicated and we thought it better in your own interest to divert you to Cambridge, if possible, so as to avoid any last moment changes.”

“Our students will, of course, be reading for London degrees, but it is our desire, on grounds of economy, to make the greatest possible use of teaching facilities that may be available in Cambridge. I am sure that it will prove possible for much of the teaching, for instance in History, Political Science and Economics, to be provided by the lectures given in Cambridge for Cambridge students and we should, if you agree, avail ourselves of this teaching to the fullest possible extent. No doubt we could give you more precise information about teaching arrangements when we know how many teachers the University of Cambridge intends to reserve for teaching purposes in the event of war and when we have had an opportunity of comparing teaching programmes, syllabuses, etc.”

On 14 July the Cambridge University and College Committee met to discuss the proposed evacuation and Carr-Saunders and the School Secretary, Walter Adams, travelled to Cambridge on 19 July to discuss arrangements with J T Saunders, Secretary General of the Faculties. On the same day Henry Dean, Vice Chancellor of Cambridge, wrote to Peterhouse asking them to consider providing accommodation for LSE. The selection of Peterhouse is not fully explained but Thomas Knox-Shaw, the Treasurer of Cambridge suggested it was because it was close to residential accommodation suitable for women staff and students. 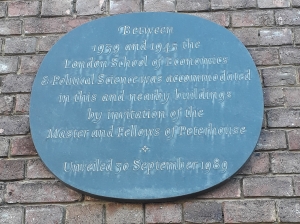 On the 25 July the Governing Body of Peterhouse recorded that:

“The proposal of the University Committee that the College should house the London School of Economics in the event of war was approved. It was agreed, subject to any general agreement between Colleges, to charge £3 3s a week for board and residence.”

On the 1 September 1939 the Ministry of Works took over the Houghton Street building initially for the Ministry of Economic Warfare later the Air Ministry. In October 1939 Michaelmas Term began in Cambridge.