When William Beveridge arrived at LSE in 1919 he was joined by Jessy Mair, his private secretary at the Ministry of Munitions. LSE Archivist, Sue Donnelly, takes a look at their controversial relationship as Director and School Secretary.

Janet (Jessy) Thomson Philip was born in Dundee on 26 November 1876. She left Dundee High School with the highest marks in her leaving year before studying mathematics at St Andrews. At St Andrews she met David Mair – family memory recorded her as sitting on a table swinging her legs and smoking a cigar when they met! He was her external examiner, a Cambridge mathematician, who transferred to the Civil Service Commission. They married at Newport on Tay in 1897 and had four children – including Lucy Mair, later Professor of Anthropology. David Mair was William Beveridge’s cousin and they first met at a family gathering in 1904. In 1907 all three went on a mountaineering holiday. In 1913 the Mair family moved into a house in Campden Hill, Kensington, and helped Beveridge to set up home in nearby Bedford Gardens where he lived with his parents. From this time Jessy Mair often acted as hostess at Beveridge’s social gatherings.

Sadly the Mairs were not well suited – David Mair was an introvert who disliked social occasions while Jessy Mair was highly sociable and ambitious. In 1915 war time labour shortages gave her the opportunity to work at the Ministry of Munitions, first as a volunteer than later as Beveridge’s private secretary. In the autumn of 1916 she joined the newly established Ministry of Food and in September 1917 was promoted to the post of Assistant Director Bacon Distribution with a salary of £600.

Following William Beveridge’s appointment as LSE Director in November 1919 Jessy Mair was appointed as Business Secretary to the School, working alongside the School Secretary and Dean Christian Mactaggart, with a salary of £500 pa. It is unclear whether Beveridge encouraged Mrs Mair to join LSE – she had prospects for promotion in the Civil Service – but her acceptance letter stresses that:

… the main interest of the greater part of my life has been in educational and academic ideals.

As School Secretary Jessy Mair was closely involved in the development of the School for both students and staff. In 1922 she offered a price of one guinea to any student who came up with the winning suggestion of a motto for the School. In November 1925 she inaugurated a series of lunch hour concerts. She was also closely involved in the development of the campus – a central theme of Beveridge’s directorship.

In 1934-1935 Mrs Mair championed the development of a modern languages department and in 1935-1936 the establishment of a course for students wanting to take the civil service examinations. In February 1935 she was asked to sit on the Selection Board for candidates for the Assistant Inspector of Taxes Examination that year and she was the Sunday Times correspondent on London University affairs writing 30 columns a year for 3 guineas a week.

Although the Director and Secretary maintained a firm formality of address in their working relationship at the School from the early years some staff were concerned about Jessy Mair’s influence over the Director. After a weekend in Hampshire with Harold Laski, Herman Finer and K B Smellie in May 1922 Beatrice Webb wrote:

What interested and perturbed us was the hatred of Mrs Mair, the secretary of the School. Mrs Mair is a tall, fine looking Scottish woman, very much a Scot in manner and speech and in her ambitious and domineering temperament. To us she is as sweet as can be. She is reported to be all powerful with Beveridge, who brought her as his secretary into the administration.

There were complaints that Mrs Mair came between the Director and the staff. Beatrice noted that she neither liked nor disliked Mrs Mair but both she and Sidney were very supportive of William Beveridge as Director. In 1928 Beatrice commented that Beveridge and Mrs Mair ought to be “man and wife” although she discounted the more scurrilous rumours:

It is, I am pretty certain, a platonic relationship – but in spite of their mature age it is far too romantic to be comfortable for the institution over which they preside as Director and Secretary…

From 1933 the Mairs lived separately and in the final years of the Beveridge’s directorship the Secretary faced greater criticism.

In 1934 Beveridge drew up a proposal for an Institute of Economic Research. Beveridge would stand down as LSE Director, heading up the new Institute with Mrs Mair as secretary. The Rockefeller Foundation rejected the idea almost immediately but the proposal worried several senior colleagues, including Professor Lionel Robbins, who felt it might deflect funding from other research. They were clear that Mrs Mair should not be on the staff of the institute.

Eileen Power is unhappy about the School – Beveridge she says, is breaking down in health, and his influence over the staff – largely owing to the Mair entanglement is nil. Mrs Mair must go is the solution of the difficulty.

At the end of 1936 William Beveridge met with some of the School’s Governors in the offices of the chairman, Lord Stamp. Beveridge had requested an extension of Mrs Mair’s contract for five years beyond the usual retirement age of 60. The Governors decided to refuse. Beveridge, upset, sought Sidney Webb’s advice, which was to persuade Mrs Mair to resign with six months’ or a year’s absence.

In January 1937 the Secretary wrote to the Director expressing her desire to stand down as Secretary:

Above all, I want before too long the leisure to enjoy those nearest and dearest to me; and also to carry out the projects for which the continuous duties at the School for the last seventeen years have never given me the leisure.

Jessy Mair was asked to remain as School Secretary until 31 July 1938 followed by a full year’s sabbatical on full pay for 1938-1939. In March 1937 Beveridge resigned to take up the post of Master of University College, Oxford and in May Alexander Carr-Saunders was appointed as his successor. Walter Adams became the new School Secretary.

Posted In: People | Running the School | Women at LSE 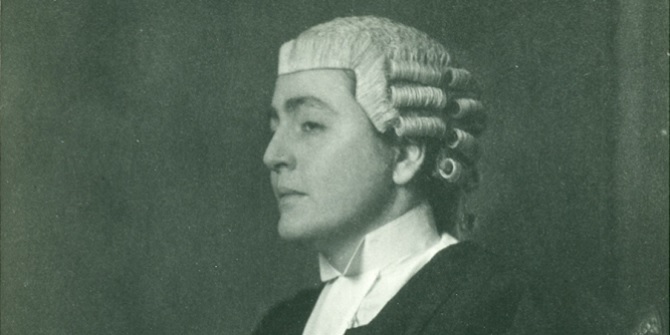