In this article, Sandiswa Mapukata argues that the neoliberal economic restructuring and technological advancements led to the development of algorithms which govern the employment market. While the algorithms exacerbate work relations and racial gaps, they also create opportunities for the workers to challenge this system and defend their economic and political interests.

When exploring the nature of labour in the 21st century, partitions such as ‘formal’ and ‘informal’ labour exclude labour practices in the Global South (Bieler and Nowak 2021: 1467). Decades of neoliberal economic restructuring have made precarious employment more commonplace in both the Global North and the Global South (Bieler and Nowak 2021). This was further exacerbated by technological developments: digital technologies exacerbate the disconnect between labour legislation and systems of social protection (Webster 2020), and new forms of algorithmic control govern workers in sectors such as the gig economy. Racialised workers in contexts such as South Africa have used these same algorithmic technologies to resist such algorithmic control. This article explores how a politick of decoloniality and embodiment may enable workers to create emancipatory futures.

The term ‘algorithm’ is one that is commonly used but does not have a singular definition. For the purposes of this article, I define algorithms as the integration of computation with social dynamics(Timke 2021). A recognisable example of this functionality is the organisation of services such as Uber between ‘drivers’ and ‘customers’. Because they reflect non-digital dynamics, algorithms can and do exacerbate asymmetrical power relations by obscuring inequalities in a manner that makes it difficult to address during the development of these algorithms. Algorithmic colonialities are exacerbated by unequal access to digital technologies hindering workers’ ability to utilise different forms of algorithmic resistance.  The digital divide largely follows colonial dynamics which determine who have greater access to the internet and the digital economy and who does not (Mapukata 2020).

Systems of algorithmic control are intimately connected to processes of datafication. When unchallenged, the collection of data is done in an obscure manner which denies access to the information generated for socially marginalised groups (Taylor 2017). A key component in the resistance of algorithmic control is fighting for data justice, which determines ethical paths in an increasingly data-fied world. Fortunately, fighting structural power with algorithms does not require coding expertise, making it a democratic practice. Algorithmic antagonistic practices  challenge “how algorithms emerge and operate in society more broadly”(Heemsbergen et al. 2022: 5). Forms of algorithmic disruption include transforming information from unknowable black boxes to user-friendly tools that mediate emerging distributions of power that are not yet widely visible (Scasserra 2020). Antagonistic algorithmic practices make the dominant socio-political and economic systems available to people in new ways by enabling different forms of political knowledge, political expression, and political action (Heemsbergen et al. 2022: 8).  The remainder of the article will discuss algorithmic resistance among undocumented migrant platform workers in South Africa to demonstrate how  racialised workers may adopt a decolonial embodiment of resistance that may, in the future, lead to the construction of emancipatory alternatives.

In the South African context, platform workers[1] include Black undocumented migrant workers (Webster and Masikane 2021). These workers are particularly vulnerable to racialised and xenophobic systems that exploit their precarious social standings. By being classified as contractors instead of workers, platform workers are unable to access labour protections and are mostly unable to participate in workers’ unions Furthermore, Black undocumented migrant workers live and work in a context whereby lackness is conceptualised in a complex manner. Socially, Blackness is designated to those of African descent whilst in terms of labour legislation, Blackness is designated to non-White South Africans (including those who are not of African descent). The discrepancy between the social and legislative designations of Blackness has exacerbated social fissures between the different non-white racial groups in the post-apartheid era. This has also resulted in the development of an increasingly exclusionary understanding of Blackness that lends itself to xenophobic iterations of which groupings of Black Africans belong and do not belong. In the socio-economic milieu of post-apartheid South Africa, this development has resulted in the justification of xenophobic sentiment that has in more extreme cases resulted in the deaths of dozens of African migrants[2].

Already since the 1960’s, the apartheid South Africa practiced methods of surveillance that could be considered as the precursor of contemporary algorithmic control. This system included  the use of fingerprinting for indentured Indian labourers – which is still in place today – as well as the dompas (internal passport) system for Black (i.e. Black South Africans of African descent) who worked in urban spaces designated for white businesses and residents (Breckenridge 2014). Resistance to these surveillance technologies included boycotts and general strikes. Mahatma Gandhi led protests between 1906 and 1908 which were not successful in getting then-South African prime minister, Jan Smuts to repeal the 1907 Black Act that targeted South African Indians for fingerprinting (Breckenridge 2014). General strike action in response to the dompas system included the 21 March 1963 Pan Africanist Congress of Azania (PAC)-led Sharpeville protest which culminated in the South African police shooting at and killing 69 Black South Africans whilst injuring 180 from the crowd (Evans 2009).

In present-day South Africa, Black African migrants have become increasingly vulnerable to forms of exploitation and exclusion, particularly to systems of algorithmic control. However, the new technologies also allowed them to move beyond boycotts and strikes to resist the algorithmic control. One example is using technologies such as WhatsApp groups to organise amongst themselves instead of relying on non-digital trade union configurations that would render them more visible to the platform companies they work for (Webster and Masikane 2021).

Workers have also put pressure on platform companies by implementing collective logouts from apps as a digital form of a stay-away. This has recently been utilised by South African drivers who are calling for increased fees and increased regulation to protect their rights (Prinsloo and Cele 2022). Platform workers can also use the platforms to limit the number of riders operating at a time to improve workers’ bargaining power with platform companies (Webster and Masikane 2021: 48) This demonstrates the forms of algorithmic resistance that has been used by racialised workers in platform economies, who are unable to form unions that would enable them to embark on strike action- this stands in contrast to the fate of the majority Black South African truck drivers who embarked on unionised strike action in June 2022[3] (Dlamini 2020).

Although the dehumanisation of racialised workers depended upon framing their existence as being exclusively corporeal, it is also important to note how this framing has served to become disembodied. For workers, it is therefore important that they adopt embodiment[4] as a means of decolonising their resistance against algorithmic systems of control to truly assert their autonomy as well as their humanity. However, there is also the risk of these forms of embodiment rendering workers vulnerable to violent punishment for their audacity to challenge a system that will continue to exploit their precarious social positioning. The Marikana massacre[5], which resulted in the death of 34 mine workers, was proof of Black workers’ disposability in the post-apartheid social order (Davies 2015). How much more for non-South African undocumented migrants who are trying to eke out a living? Being categorised as contractors, platform companies may disconnect them, which would mean an immediate loss of income without compensation. It is for this reason that algorithmic antagonisms can only succeed with cross-class solidarities that both empower and protect workers who seek to embody decolonial forms of algorithmic antagonisms.

This article has explored how racialised workers articulate collective action and antagonism within and beyond algorithmic systems. This is in a context of the increasing recognition of the labour practices that are prevalent in the Global South. New digital technologies exacerbated the precarity of employment, while a new form of algorithmic control governs workers in sectors such as the platform economy. Contextualising my discussion, I explored the ways in which migrant labourers have employed forms of “algorithmic antagonisms” to dismantle forms of algorithmic control as well as construct emancipatory alternatives. Questioning the usefulness of nationalistic forms of organisation in an increasingly globalised terrain of struggle, I argue that, in the future, the construction of emancipatory alternatives will depend upon adopting a decolonial embodiment of resistance that serves to humanise racialised workers who have been dehumanised by systems guided by the racial capitalist logic.

Davies, N., 2015. Marikana massacre: the untold story of the strike leader who died for workers’ rights. The Guardian. URL https://www.theguardian.com/world/2015/may/19/marikana-massacre-untold-story-strike-leader-died-workers-rights

[1] I define a platform worker as someone who works for a company that provides goods and/or services for customers using a platform. Examples of the platform companies I am referring to include Uber, Deliveroo, and Didi.

[2] This has had devastating consequences with many losing their lives during the various spouts of xenophobic violence that have occurred across South Africa since 2008. Politicians have begun to exploit this xenophobic sentiment by calling on key actors to put South Africans first. Although they do not explicitly state that they are calling for the prioritisation of Black (i.e. African) South Africans over other Black Africans, this implication becomes clear when they use descriptors of the African ‘Other’ as being either Zimbabwean or Malawian or Nigerian. These are countries with populations that are more racially homogenous than South Africa. It then becomes clear the racial identities of the non-South African ‘Other’ whom they are targeting. In the current context of increasing rightwing nationalism, there are other worries around the purposes of designating Black South African-ness. Does this then mean that Black South Africans need to be tied to relics of coloniality and apartheid through knowing Afrikaans for instance?

[3] Worryingly, these drivers were striking against what they perceived to be the preference for employing non-South African migrant drivers instead of South African nationals(Dlamini 2020).

[4] In the context of South African Black feminist politics, it has not been uncommon for protests to be of an embodied nature with Black South African feminists having participated in topless protests to call for a ceasefire in police brutality during the 2016 Fees Must Fall movement (Ndlovu 2017; Young 2020).

[5] The Marikana Massacre occurred on 16 August 2012 when members of the South African Police Service (SAPS) opened fire on striking miners during a wildcat strike in Marikana, North West province. The police shot 112 mine workers, killing 34 of them. This massacre was a reminder of the massacres that often occurred during the apartheid era, most famously the 1963 Sharpeville Massacre (Davies 2015).

Sandiswa Mapukata is doing their PhD in Human Geography and Urban Studies at the LSE. Prior to that, they were based at Wits University’s Southern Centre for Inequality Studies where their research focused on the future of work in banking, and the impact of the digital divide on workers. Currently, their research interests are in Black geographies, financial innovation, and spatial imaginaries. 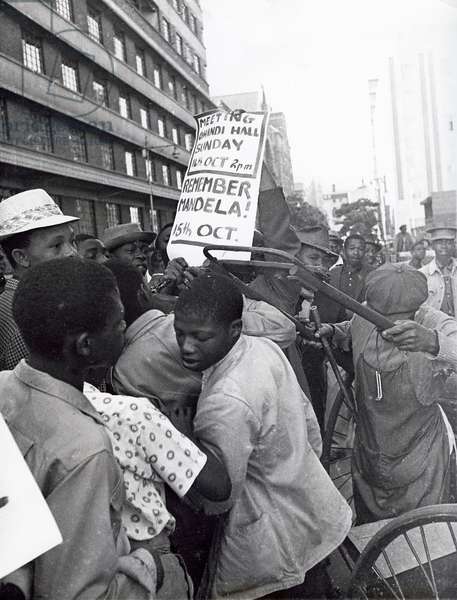