Do politicians deserve our ire? Defending Politics argues public anger is in fact misguided. An increasing amount of citizens are disappointed with what modern democratic politics delivers, but is it possible that the fault lies with those who demand too much, fail to acknowledge the essence of democratic engagement, and ignore the complexities of governing in the twentieth century? Birgit Schippers reviews. 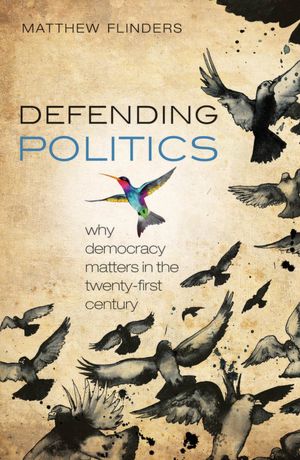 Phone hacking and bankers’ bonuses may have replaced duck ponds and the John Lewis list as the latest objects of public wrath, but it is fair to say that politicians remain high on the list of groups that the public love to hate. Why politics and politicians have such a bad reputation is an intricate problem that has occupied scholars and political commentators for a long time. Matthew Flinders’ book makes a distinctive contribution to this debate by challenging what he refers to as the “bad faith model of politics”: the idea that politicians are only in it for themselves, that politics corrupts, and that it is redundant. Against such alleged cynicism, disengagement and depoliticization, he proposes a more optimistic and realistic version of politics, which emphasises the relevance of politics to our daily lives, but which also stresses the limitations of what politics and politicians can realistically deliver.

Flinders’ target readership extends beyond the academy. His aim, to engage with the wider public and convince them of the value and significance of democratic politics, is reflected in the style of the book: Flinders’ defence of politics as “a civilizing and human activity” (p. 94) is an engaging, passionate and personal appeal to hold dear the merit of democratic politics, to preserve and expand the democratic sphere, and to remind ourselves of our civic responsibilities as political adults, not as political infants (p. 42).

Against what or whom, though, should politics be defended? One might expect left- or right-wing conspiracies, fundamentalists or foreign invaders in various guises. In fact, the threat to democratic politics comes in a more insidious form. Amongst the key antagonists identified by Flinders is an unfettered market ideology that has turned citizens into consumers. Equally damaging to democratic politics are the 24-hour media culture that thrives on negative headlines and trivialisation instead of information and responsible news coverage, and the delegation of political responsibility onto quangos.

The public’s actions and attitudes constitute a further challenge to democratic politics. At the heart of this threat lies an “expectation gap”, characterised by citizens’ unrealistic expectations of what politics and politicians can deliver and achieve. This expectation gap is mirrored by a “perception gap”, pertaining to the disparity between the public’s perception of public services on the one hand, and their actual experience of those services on the other. Arguing against the gap in expectation and perception, Flinders stresses instead that “[d]emocratic politics is messy, invidious, frustrating, and cannot deliver simple solutions to complex problems” (p. 101).

This stress on the complexity of democratic decision-making in the twenty-first century, and on the dilemmas and challenges facing politicians and citizens is one of the great strengths of this book. And as I already intimated, Flinders succeeds in presenting his arguments with much clarity. However, what the book gains in clarity, it loses out in terms of detailed and subtle analysis of complex problems. Thus, the author’s self-confessed “use of a fairly broad brush” (p. xiv) runs, paradoxically, counter to his insistence on the complexity of the problems at hand. For example, Flinders criticises the media for its negative and simplistic portrayal of politics and politicians, yet his own portrayal of the media and its relationship to politics lacks subtlety and complexity.

My main criticism, though, pertains to Flinders’ curtailed understanding of democracy. Even though he makes an argument “in favour of politicization and the expansion of the democratic sphere” (p. 105), he offers surprisingly little about the role and place of the citizen in our changing world, with its changing media landscape or structures of economic governance that the book so clearly depicts. His defence of democratic politics hinges mainly on a reconfigured relationship between citizens and their representatives. But surely, there is more to democracy than selecting and electing courageous and honest politicians who are willing to take tough decisions? In fact, what is often articulated as disengagement from politics might actually turn out to be a frustration with the structures and processes of the system of representation, with their limited opportunities for citizen input and their immunity to citizen protest – the mass protests against the invasion of Iraq is a case in point.

Moreover, despite his assertion of optimism, Flinders pays scant attention to the vibrancy of democratic engagement and political activism outside the sphere of representative politics that has emerged in recent years, ranging from the Occupy movement to student protests and so-called ‘Slut’ walks. Without overstating their significance or impact, these movements have drawn substantially from younger sections of the population, traditionally characterised as those least connected to politics and the political system. I am also uncomfortable with Flinders’ interchangeable use of the terms ‘politics’ and ‘democracy’; surely, not all politics is democratic? Besides, are democratic regimes inherently better equipped at responding to natural disasters or at providing health, education or infrastructure development? If anything, the strength of democratic politics lies with its capacity to subject policy decisions, or the actions of state agencies, to democratic debate and contest, and to hold decision-makers accountable for their actions.

Of course, as my objections indicate, I have already shifted onto the ground of democratic politics that Flinders wants to cultivate: namely, to engage with, and reflect upon his ideas and arguments. And even though I am not convinced by every analysis offered in this book, it is without reservations that I recommend it as a timely reflection on the challenges faced by democratic politics.

Birgit Schippers is Senior Lecturer in Politics at St Mary’s University College Belfast, where she teaches modern and contemporary social and political theory.  Her research interests focus on feminist theory, on citizenship and democratic theory, and on political theories of violence. She is the author of Julia Kristeva and Feminist Thought (Edinburgh University Press) and is currently completing a book on Judith Butler’s international political philosophy (Routledge, forthcoming). Read more reviews by Birgit.