This introduction from K. Malcolm Richards provides a sound case for why students of the arts ought to give extra thought to Derrida’s work. Considering the philosopher’s most influential works, undergraduate students will also benefit from condensed and competent summaries of the work done by those who inspired him, finds Emily Coolidge-Toker. 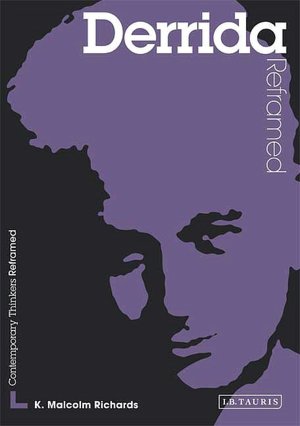 K. Malcolm Richards introduces the main tenets of Derrida’s notoriously elliptical thought in this book from a series published by I. B. Tauris. Although, as with any similar act of translation, it suffers from an undercurrent of compromise. Written for undergraduate students in the visual arts, the ‘reframing’ referred to in the title is far from subtle, incorporating more than enough percussion to ensure that students are always aware of how exactly to understand the material with respect to the visual arts curriculum.

So: what exactly does a visual arts student need to know of Derrida? Anyone who cares to impersonate one will find that this book begins with a discussion of the terminology relevant to deconstruction and the main ideas behind his theory, and then carries on to deal with a few specific texts: The Truth in Painting (1978), Memoirs of the Blind: The self-portrait and other ruins (1990), and Right of Inspection (1985). Having so clearly delineated his limited scope and audience, Richards sets himself up for a difficult, but no longer scoffable project.

The expected audience, however, is given a little too much leeway in shaping the tone of the book. For instance, in hoping to pre-emptively calm wild-eyed, awe-struck students, Richards tries perhaps too hard to reassure the reader that Derrida is only “seemingly complicated” – an approach which is falsely demystifying. And false demystification is no demystification at all. He could have stopped at calling his subject “JD” and “Jackie” and still have succeeded more honestly in the original well-intentioned aim of humanizing an imposing figure. Instead, students run the risk of cutting short their exploration of a fascinating subject and not developing a healthy respect for the incredible care with which Derrida formulated his positions. It’s in that spirit that his work is so often misunderstood.

Richards’ treatment does a few important things very well, though. For students who have never read Derrida but wish to do so (or to sound as though they have), he provides a smooth introduction to Derridian language, and that too-clever-by-half habit of artful hyphenation that Judith Butler also puts to (admittedly less careful) use. As far as the intended audience is concerned, becoming acquainted with Derrida’s attention to the layers of meaning one can derive from otherwise familiar terms could well be a linguistic jostle sufficient to recalibrate conceptual frameworks, and at the very least, provide some inspiration for the next assignment.

The introduction provides a sound case for why students ought to give some thought to Derrida’s work, citing the prevalence of terms coined by himself in academic and popular culture, as well as the mighty scope of fields and causes on which he wrote and to which he is decidedly relevant. Richards also does a marvellous job here of situating Derrida among his peers and contemporaries, providing condensed and competent summaries of the work done by those who inspired him. Now this is the sort of humanizing I’ll happily stand behind.

The first section introduces Derrida’s main contributions to our modern lexicon, namely the terms deconstruction (déconstruir), the expanded notion of écriture built on Saussure’s distinction between the signified and the signifier, the “dangerous” supplement which destroys any illusion of an origin (illustrated here with the example of a potentially unending sequence of Star Wars films), and différance-with-an-‘a’ (which Richards illustrates through the visual tradition of trompe l’oeil).

The second chapter further explores these terms through The Truth in Painting, Derrida’s first work that explicitly deals with visual tradition. Here, in understanding the term parergon (parasite) we explore our fascination with the paranormal (oh, X-Files, how you haunt us), and the importance of ‘both/and’ relationships over ‘either/or’ relationships.

We know that Derrida himself was an incredibly careful writer who made endless use of the subjunctive mood, habits which really require interested parties to buckle down and do the reading themselves. Especially given the readily quotable aphorisms that occasionally crop up in otherwise dense text, he is easily and often misunderstood. Interested readers should keep a wary eye out for people quoting the following as pillars of Derridian thought: “there is nothing outside of the text” or “that the white man takes his own mythology […] for the universal form of that he must still wish to call Reason”. It’s a really lovely irony though, I suppose, seeing as he’s also famous for pointing out that the text can function independently of authorial intention. Sneaky sneaky.

A connoisseur of Derrida will recognize vast over-simplification, but Richards’ reading is sufficient for an introduction for such a specific audience; readers looking for a more nuanced introduction will want to look elsewhere. Perhaps even directly to the work in question. I should emphasize, here, that Richards never implies that his treatment is a replacement for reading Derrida’s own words. Quite the reverse: he presents the book, rightly, as supplementary (oh, that dangerous supplement!) – a chauffeur-driven car up the topiary-lined driveway that will get you past the guardhouse and into the foyer. Whether you stay for dinner is up to you.