New Beginnings covers Irish constitutional development from Home Rule to the Good Friday Agreement, focusing on turning points where radical constitutional change was discussed, attempted, or implemented. Taking the relationship between constitutionalism and democracy as its key issue, it asks why Irish politicians have seen constitutions as ways of making democracy more manageable, rather than of furthering democracy. Christine Bell finds that Bill Kissane’s work also reveals a hidden gender history to the constitutional negotiations. This book provides a detailed conceptual analysis of the development of the Irish Constitution from the period of Home Rule Bills through to the present day. The author’s central argument is that Ireland has never gone through a ‘constitutional moment’ marking a move by ‘the people’ to make a decisive break from the past constitutional tradition to form a genuine ‘we the people’ document. These ‘New Beginnings’ in a sense were no such thing.

The counter-story that Bill Kissane tells is a story of the emergence and consolidation of a state in a dual process of statecraft and constitution-making. The resultant constitutional settlements were based on a compromise between Irish aspirations to self-determination as marking a break with the legacy of British law, legal structures, and ways of doing business on one hand, and the need for pragmatism as to how best to bring together diverse views on the state and the constitutional project on the other. Kissane traces this dynamic through Home Rule Bills, to Ireland’s 1922 Constitution to its 1937 Constitution, referenda processes, and the Belfast Agreement, ending with some thoughts on the relationship of the constitution to the current economic crisis.

Centrally, Kissane’s book tells an important story of constitution-making as process rather than moment. The Irish example shows how when opportunities for disjuncture with the past were presented, notably in 1922 and 1937, the Irish state used language of disjuncture but a structure that showed considerable continuity with the past. Scattered voices for a more radical new beginning were not followed – it proved easier to reach agreements on tweaks of what came before than on articulating a radical new constitutional self-understanding. However, continuity was also to some extent a product of the imprint of the Anglo-Irish Treaty of 1921, which delivered Ireland its independent status, but in an incremental way. The 1937 constitution-making process was therefore needed to complete the constitution as a distinct self-understanding of the Irish people. But here too, Kissane notes, the imprint of the past shaped a pragmatic approach, in particular through a need to marry dual commitments to liberal constitutionalism with nationalism. Kissane notes that analysis of Irish constitutional developments needs to understand the strength and role of party politics, as different types of nationalism and different conceptions of the Irish state jostled. It is part of the strength of his work that he attempts to document contemporary debates and sources to try to understand how those engaged viewed the constitutional project, and the differences between the different constitutional projects asserted (although it would have been good to see some more discussion of the fashioning of the 1916 Proclamation as part of the discussion).

In this discussion, an interesting sub-study emerges as to the place of women. Constitutional law and processes of constitution-making can often seem quite a male affair. Kissane does not attempt to write a women-centred account of the process (someone should), but neither does he ignore the issue of gender and women. Irish women were at the forefront of demands for both independence and women’s suffrage. Kissane’s work begins to reveal a hidden gender history to the constitutional negotiations, where time again, pragmatic compromises with other ‘blocks’ in Irish society, notably the Catholic church, meant that women were told they would have to wait, or accept a much watered down version of what they had demanded. As a vision of a constitution as capturing the ‘we the people’ vision became a vision of the constitution as a tool for state management, so the demands of women were erased, or traded against the need to accommodate other groups within the body politic.

In this the work holds lessons beyond the Irish context, for those struggling to include women and women’s rights in contemporary constitution-making processes experience themselves at the end of similar tradeoffs, including women post Belfast / Good Friday Agreement (see in particular O’Rourke, Gender Politics in Transitional Justice).

Kissane’s account is also interesting in showing a tension between the constitution as capturing a cosmopolitan ambition and the constitution as an expression of national identity. The account provides interesting detail on the use of comparative constitutional law in drafting, in particular in the 1922 Constitution. While constitutions are uniquely in law expressions of national identity, and perhaps no-where more so than in countries gaining independence, Kissane’s account shows a state that had cosmopolitan aspirations, aspirations that were less evident in the process of drafting the 1937 constitution, which he reminds us was ‘drafted in a decade of mounting crisis’ (p.57).  By this time the predominance of the concept of self-determination, and Ireland’s place on the periphery of Europe led to a more inward looking affair.

In counter-posing his account to that of Ackerman’s constitutional moment Kissane tries to capture is the ways in which Irish constitution-making, which emerged from a ‘treaty’ process, never completely cut free from the imprint of that process as requiring both a negotiation as to the relationship with the ‘outside’ (at that time Britain, but later Europe, and then with the Belfast Agreement, Britain again), and a negotiation between the powerful groups within Irish society all of whom sought to control the constitution, but more importantly, all of which had competing visions of constitutional order.

Contrasting this type of process with the concept of a ‘constitutional moment’, as in a single moment in which the constitution is completed to form a ‘we the people’ document , is useful to showing the statecraft that complicated any attempt to create a ‘we the people’ document. However, this reduces Ackerman’s project to merely a useful lingo, when in fact Kissane has a broader contribution to constitutional theory to make. In talking about constitutional moments Ackerman was trying to show in the US context that the account of a constitutional founding followed by development was not entirely accurate, by pointing to the ways in which ruptures had happened. Ackerman’s project was to show that these moments, rather than aberrational moments lacking in legitimacy, in fact flowed from a concept of popular sovereignty in which they rooted their legitimacy.

Taken together, both Ackerman’s and Kissane’s accounts show constitution-making to always involve navigation of narratives of continuity and discontinuity, and a marriage of ‘we the people principle’ with a more pragmatic form of statecraft. Kissane could perhaps find a wider constitutional theory resource in the work of Martin Loughlin (also at LSE) on the exercise of constituent power as always involving the type of statecraft Kissane identifies (see Foundations of Public Law) or the very different language of Vicki Jackson at Harvard who describes constitutions as always attempting to marry the aspirations of principles and values, with the imperfections of the moment(s) of foundations, whose political contingencies always infect and limit the ambitions of the document (see Constitutional Engagement in a Transnational Legal Era). For Jackson, processes of constitution-making, amendment, and even constitutional interpretation, always involve an attempt to ‘perfect’ the document away from its imperfect foundations, which inevitably becomes caught up in the similar pull of the political contingencies of the point of revision.

In fact, Kissane’s account can offer a case study resource to constitutional theorists in providing a detailed case study of how these dynamics played out in the Irish context and in this is extremely useful.  The strength of the book’s approach is to try to understand how those involved at the time understood the drafting process and conceived of what they were trying to do.

However the book is also important because Ireland now appears to be embarking on another attempt at constitutional revision. A Constitutional Convention has been announced, comprising 100 people, 66 of which will be picked at random from electoral registers, the rest comprising TDs, Senators and parliamentarians from Northern Ireland. The Convention will consider reform on matters such as the Presidential term of office and voting age and if it deals with these appropriately, further more controversial issues. The government has not committed to implementing the Convention’s recommendations but has committed to responding within four months of each recommendation being made.

Nonetheless, it is an interesting experiment. However, Kissane’s book tells us that constitution-making processes are always a matter of statecraft, and therefore this new round of constitutional self-examination is not necessarily one which we should expect to arrive at a profound new constitutional self-understanding for Ireland.

Christine Bell is Professor of Constitutional Law at the University of Edinburgh. Read more reviews by Christine. 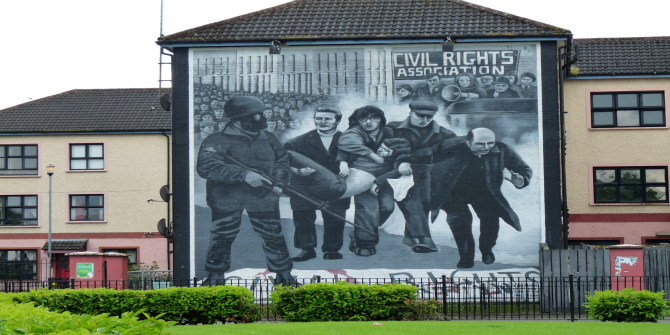