In early April 2010, Nick Clegg was fighting for recognition, even as the young, fresh and personable leader of Britain’s third political party. Two weeks later he was the focus of Cleggmania and his popularity was being compared with Churchill’s. Four weeks after that he became the second-most important figure in the government. But within a year he was ridiculed and reviled as popular hopes turned to disappointment. Chris Bowers attempts to uncover the real Nick Clegg in this biography, writes Alastair Hill. 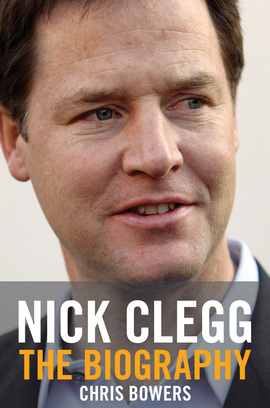 One might be forgiven for thinking a biography of Nick Clegg is perhaps slightly premature. Having journeyed from Cleggmania in May 2010 to widespread derision in 2011, to even revulsion in some quarters in 2012, Clegg’s political fortunes remain deeply entwined on the legacy of the Coalition Government on which the public will not pass electoral judgement on until 2015.

Nevertheless, while Chris Bowers’ updated biography of the current Deputy Prime Minister is premature in this sense, this extremely well-sourced and highly readable account of Clegg’s career to date gives both insight and instruction on a man who has already achieved much.

The first half of this book largely covers Clegg’s childhood and the development of his early career in Brussels. In fact, such is the detail of Bowers’ account of Clegg’s early years, for those not Lib Dem members or Nick Clegg obsessives, the first few chapters could be a little slow – that his siblings called him Nickje or that he had a passion for the musician Prince are perhaps not overly instructive.  Taken as a whole however, Bowers’ account builds a narrative of how Clegg’s cosmopolitan, albeit privileged, upbringing and early career in Brussels built the foundations from which he derives much his contemporary liberal politics.

The second half is much wider in its scope, covering Clegg’s rise to leader of his party and his parties first two years in Coalition with the Conservative Party. This section also covers the recent history of the Liberal Democrats. Again impressive in its detail, Bowers looks here at the internal mechanics of the party, both in the shape of its key individuals as well as ideas. For anyone interested in recent political history these latter chapters will be highly readable.

Indeed, while Bowers highlights that the minutiae of the Coalitions are covered in detail elsewhere – such as in Rob Wilson MPs Five Days in May, David Laws’ 22 Days in May and Peter Mandleson’s biography The Third Man – he perhaps does himself a disservice in what he adds to the existing literature on this period. While the finer points may be covered elsewhere, what is particularly illuminating in Bowers’ account is his analysis on the mindset that Clegg approaches both the early Coalition negotiations and the first two years in Government.

As is widely known, once it became clear the Lib Dems held the balance of power in the hung parliament Clegg was intent on being seen to make coalition government viable. For a party which continues to advocate the kind of electoral reform which would result in coalitions largely being the norm as in continental Europe, the party was well aware that it had to act with honesty and integrity in the negotiations and any subsequent operations in government.

In fact, and as Bowers highlights, that a new Government was formed in five days, and with the Conservative party who are perhaps not the Liberal Democrats natural allies, compares rather impressively to the speed at which many other European countries form coalition governments. Moreover, what was even more novel was the gusto in which Clegg and David Cameron entered into what was widely perceived as an unholy marriage by many Lib Dem members.

With the benefit of hindsight, Bowers’ suggests this may have been somewhat of a mistake: “From the vantage point of May 2011, the launch of the coalition in the rose garden of 10 Downing Street was beginning to look tactically dubious, and by spring 2012, one leading Lib Dem was saying, “was the rose garden launch a mistake?  You bet it was!”

Bowers’ suggests that turning point was the failure of the AV referendum, the suggestion being that Clegg was outmanoeuvred by a rather mendacious David Cameron. Whatever the exact account of events here, Bowers is right to suggest the fallout from this referendum represented a turning point. Losing the referendum certainly forced Clegg ‘to get tougher’, as the party moved towards a new strategy of differentiation in coalition government, which essentially remains the Lib Dems strategy at the time of writing.

The wider conclusion seemingly drawn by the Lib Dems on the first year in Coalition then was that it had been more a failure of political communication on their part, not of policy. As Bowers’ contends, the party’s current predicament is not borne of the fact that they cannot ‘claim a reasonable number of policy successes in Government’, but rather ‘they’re having immense difficulty publicising these, or getting the public to realise they were Lib Dem ideas in the first place’.

This of course remains disputed, Labour figures continue to argue that the Lib Dems have little to show for their time in Coalition, while some backbench Tories argue the complete opposite, contending that the DPM has far too much public influence. (Rather amusingly, Bowers highlights that Clegg’s principal strategist Richard Reeves bought Nadine Dorries MP flowers when she asked the Prime Minister to tell Nick Clegg who is boss in the commons. Indeed, Backbench Tories continue to do much for the Lib Dem PR efforts.)

The reality is of course that articulating to the public a narrative of success in coalition remains the Deputy Prime Minister’s greatest challenge, and on which rests much of his political legacy. However, and as Bowers assiduously argues in the latter half of this biography, this current predicament should not detract from his career achievements to date. Clegg has taken a party seemingly comfortable in perpetual pressure-group opposition into the heart of government.