Many financial institutions have in recent years failed: failed either completely, and gone into bankruptcy; or failed in the sense that they have not achieved what their owners or their customers expected them to deliver. This collection of papers aims to consider how the governance of the financial sector by the authorities can be improved, and how the governance of firms and institutions within the sector can be improved to minimise the probability and cost of future crises. Roger McCormick believes the book contains some excellent material and, despite the over-ambitious title, is a worthwhile contribution to one of the most vexing issues of our times. 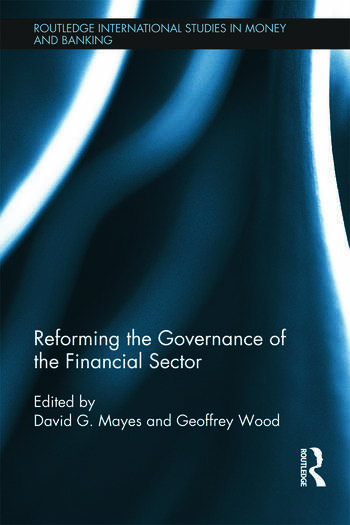 To attribute bank failures, or indeed the global financial crisis as a whole, to a “failure of corporate governance” has become something of a truism. However, without consensus on what we mean by corporate governance (and the problem is even greater, if like the title of this book, we refer only to “governance”) we might as well just say that the problems occurred because of “bad decisions” or “bad behaviour”. The addition of hyperbole (HBOS, we are told by a Parliamentary Commission, failed due to “catastrophic failures of management, governance and regulatory oversight”) does not illuminate the picture greatly.

Having “identified the problem” (hindsight being a wonderful thing) we have a tendency to try and make ourselves feel better about it all by changing organisational structures (amongst regulators and regulatees) in the vain hope that this will make the “mistakes” and misbehaviour of the past less likely in the future. If we could just crack that governance problem, surely everything would be all right? The widespread frustration with the apparent pointlessness of continually re-arranging structures is evident in our unfortunate tendency to indulge in the now-customary vindictive calls for vengeance, stripping of titles, banning from positions of responsibility, fines, cutting “pension pots” and relentless vilification-by-tabloid and TV. Makes us all feel so much better! Is this due, at least in part, to a persistent tendency on the part of those in authority and learned commentators to avoid blaming real, live people for failure (as opposed to systems and organisations)?

The title of David G. Mayes’ and Geoffrey Wood’s edited collection of thirteen papers (from a conference held in New Zealand in 2010) might tempt you to think that the “solutions” to the problems attributed to bank governance could be found therein. However, the definitional problem posed by the “g-word” pervades the book. In the editors’ Introduction, for example, “governance” is given a very broad meaning as the authors look at “governance of the financial sector rather than corporate governance within it” (although they assert that “problems in corporate governance…..do indeed lie at the heart of the financial crisis”). As a result, this part of the book claims that the most obvious “institutional failures in governance” were concerned with a “lack of responsibility for financial stability at the economy-wide level”, an “inability to resolve problems without the use of taxpayer funds” and “neglect of the non-bank financial sector”. The blame is apportioned widely (and somewhat vaguely) by claims such as “…although it may have been corporate governance which  was at fault, it was the deficiencies in the regulatory framework that let this happen.” There is  also concern expressed about “governance at the global level.”

It is not until Chapter 3 of the book (by Christopher Brown and Deborah Ralston) that we get to a definition of CG. This is based on “the framework of rules, relationships, systems and processes within and by which authority is exercised and controlled in corporations.” However, this chapter is focused on problems in the governance (and performance) of superannuation funds in Australia and the agency problems associated with trustee governance structures. Since Chapter 2 (by Bruce Sheppard) is concerned with problems in the finance company sector in New Zealand, and Chapter 4 (by Wilson, Rose and Pinfold) is concerned with the failure of Bridgecorp Finance Ltd (in New Zealand), the book gets off to a rather “localised” start, which may limit its appeal to readers in, say, London or New York (notwithstanding that both these chapters make some interesting points with a potential wider application). Chapter 4 gives us another CG definition; quoting La Porta, it is: “..to a large extent, a set of mechanisms through which outside investors protect themselves against expropriation by insiders.” This seem particularly apposite in the case of banks, given that “outside investors”, in effect, means just about all of us. We have a right to be interested in what goes on inside those shiny corporate bank HQs. Changes to structure, pious statements of good intention and a plethora of codes of conduct and ethics are not enough. As the authors of Ch. 4 put it, “If market participants are not ethical, no code of conduct can ever work and alternative prescriptive actions become necessary.”

Chapter 5 (Kevin Davis) is expressly devoted to “bank governance” and begins by making the point that not much attention was paid to the topic before 2005. This is a thoughtful and thought-provoking contribution and makes some very interesting points about remuneration structures for bank executives and their linkage to shareholder returns vis-a-vis linkage to all stakeholders. There is also a useful review of post-crisis policies and proposals (although it pre-dates the LIBOR scandal and the heightened concern over ethics triggered by it).

Another very interesting chapter, by Jeffrey Chwieroth, is concerned with “creating policy stigmas in financial governance”. The author argues that capital controls have a “stigma” attached to them which has (wrongly, in the author’s view) made them off-limits for policy responses to the crisis (this being written, obviously, before Cyprus blew up). One of the sources of the stigma is alleged to be the IMF, which has fallen into bad ways of thinking due to most of its recruits being….economists! “Fads and fashions in the economics profession can…. have an important influence on the content of policy stigmas put forth by the fund,” we are told. There is certainly food for thought here. One of the early reactions to the crisis was that we should think about returning to simpler, “narrower” banking for the retail market and “separating the casinos from the utilities”. This was almost universally met by scornful responses from the great and the good that things had moved irretrievably on from the days of high street banks having “managers” that everyone knew and that there could be “no going back to Captain Mainwaring”. Then along came the Vickers Commission and the Parliamentary Banking Standards Commission….. and suddenly ring-fencing (and electrified ring fences at that) are all in vogue. It is hard, also, to see the eurozone crisis without thinking of the idees fixes that are associated with policy stigmas. Every policy option is open to consideration, it seems, except the one that seems obvious to those outside the eurozone: recognition that the whole thing was a misconceived idea and should be dismantled.

The book contains some excellent material and, despite the over-ambitious title, is a worthwhile contribution to one of the most vexing issues of our times: how to ensure that the semi-public institutions that we know as banks are run responsibly in a manner that properly balances the interests of their owners with those of their managers and, most important of all, with those of the public. There is evidence now that  banks have (at last) “learned their lesson” from the crisis and understand that much needs to be done by them to restore their reputation and public trust. However, we also know that banks and bankers have very short memories. The new approach to governance issues needs to include a “lest we forget” element.