Roberto De Vogli argues that in recent decades, modern societies have been dominated by a suicidal economic doctrine based on two articles of faith: the greed creed and the market God. Declan Jordan thinks this book is more appropriate for the reader who wishes to understand the interplay and overlap between strands of the crises, rather than an in-depth analysis of each aspect of the crises. 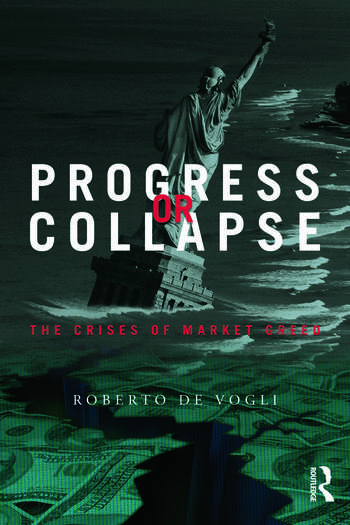 The image of the world painted by Roberto de Vogli in his polemical book on the global financial, economic, environmental and social crises is not an uplifting one. Even the cover image of the Statue of Liberty collapsing in a rising tide of money can leave the potential reader under no illusion that this will be a challenging read. De Vogli though is a fine writer and the urgency and passion with which he makes his argument means the book is never overbearing.

The book sets out to explain how neo-liberalism, which the author refers to as market greed, has become the dominant philosophy in modern societies and economies, and further how it has taken the world to the brink of collapse. The collapse to which he refers is not just economic; market greed has led us to the point of rampant and unsustainable consumerism, environmental exhaustion and psychological breakdown. De Vogli claims we now have a choice. We can continue to certain collapse or we can stop, change course to a more equal and less greedy society that will provide a sustainable future.

These are big ideas and the author demonstrates an impressive command of a broad sweep of literature and themes. The strength of the book is its treatment of the multiple and converging crises; economic, cultural, environmental, social, political and psychological. However, this strength is also a source of weakness, as the author is necessarily constrained in the extent to which each crisis can be explored separately. The book therefore is more appropriate for the reader who wishes to understand the interplay and overlap between different strands of the crises, rather than an in-depth analysis of each aspect of the crises. An example of this comes in two chapters in the middle of the book which set out the context for the battle of ideology that culminated in the shift to more liberal economic systems in the late 1970s and early 1980s.

It is here that a more nuanced and detailed consideration of the dynamics of the shift in the economic commanding heights would contribute to greater understanding of the economic crisis. It is largely what is not said that is most striking. For example, on page 81 the author states that “by the late 1970s…the Keynesian economic approach fell into disfavour and a radical version of laissez-faire economics re-emerged from the bowels of history”. On page 100 in the subsequent chapter we read that “the Keynesian era of ‘managed capitalism’ came to an end [and] the market greed doctrine was resuscitated from the bin of history”. Perhaps the author’s rhetoric to describe the emergent ideology provides a clear insight into his perspective.

It should be noted that Keynesianism has become short-hand for an economic approach that is not what Keynes necessarily favoured. He was very much in favour of balanced budgets in the absence of large unemployment and it is not clear at all that he thought it desirable, or even possible, to ‘manage’ capitalism. However, the more pressing issue here is that there is no treatment of the reasons for the fall into disfavour of what the author calls Keynesianism. The author’s suggestion is that it was the dawning of a “revolution of the rich”. This doesn’t do justice to the complexities of the time. The complexity is demonstrated on page 82 where, in the same paragraph, we are informed that “from 1960 to 1974, average unemployment was below 3 percent in OECD nations” and also that “at the end of the 1960s, strike days per worker were extremely high in OECD nations”. There is no consideration why there should be such labour unrest at a time of full employment, particularly where the prevailing economic models favoured greater government involvement in the economy.

The late 1970s was a time of significant economic and social turmoil. The author has nothing to say about the degree to which the ‘left’ facilitated the rise of the liberal agenda at that time or even to explain how the halcyon days of low unemployment described could have resulted in such radical changes in policy. While undoubtedly many exploited the economic crises of the time to promote and fund policies favouring the rich, it is unnecessarily simplistic and undermines the general argument to ascribe all of the blame to this.

The constraints of exploring the multiple crises is the unavoidable tendency in the book to ascribe single explanations to complex events or processes, both for the neo-liberal agenda the author sets himself against or the more regulated approach he favours. However, the reader is provided with more than enough references to books and papers focused on each of the issues.

The author does a remarkable job bringing together diverse ideas to construct his argument. He cites thinkers from many disciplines and ideologies such as Marx, von Hayek, Friedman, Sen, Puttnam, Schumpeter, Chomsky, Russell, Spencer and Adam Smith, to name-check just a few. The reader can be left with no doubt that we are facing immense challenges economically, socially and environmentally, indeed challenges that may seem insurmountable. De Vogli unquestionably succeeds in the task of raising awareness and making the case for change. Also, he is not as pessimistic as it may seem from his prognosis, with many observations on the benefits of less inequality, less consumerism and more engagement with each other very much hitting home. It is in this that this reviewer finds the ‘modest proposals’ at the end of the book a little underwhelming.

A Tobin tax, restrictions on capital flows and the use of derivatives, reforming or removing the IMF, World Bank and WTO and reducing the powers of multinational corporations are dealt with too briefly in couple of pages to consider all the implications and potential downsides. For example, the abolition of derivatives would adversely affect millions of small and medium businesses who use them to reduce business risks when trading internationally or from adverse moves in borrowing rates. The author points to the Nordic models of economic and political organisation as examples for the rest and, while this reviewer is very sympathetic to that view, it is hardly the ‘game changer’ needed to overcome crises of the scale presented throughout the book and it would be great to hear the author’s views on how to achieve this shift in the more economically liberal Western economies.

The book is a very stimulating and challenging one and is impressive in its command of a wide body of literature (too much to do it justice in a review such as this). While it is unclear how a sufficient number of people can be convinced of the need for change until it’s too late, a good step would be for more people to engage with the types of big ideas this book is all about.