Using case studies from Pakistan, Iran, Indonesia, China, Bangladesh, Israel and India, Sexuality in Muslim Contexts argues that Muslim religious traditions do not necessarily lead to conservative agendas but can promote emancipatory standpoints. This book is one that should be read by all those interested in sexuality, religion, Islam, or gender, writes Olivia Mason. The wide range of case studies make it suitable for both an academic and general audience while the examples make it a stimulating and accessible read. 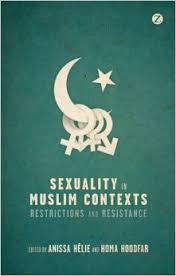 In Sexuality in Muslim Contexts: Restrictions and Resistance, a new book by editors Anissa Helie and Homa Hoodfar, issues surrounding the policing of sexual rights in diverse Muslim settings are explored. The book offers an original insight into the relationship between sexuality and bodily rights and discusses ways sexuality is restricted in Muslim contexts but also the ways women are combating these and resisting traditional understandings of sexuality. The editors argue sexuality is stigmatsed in Muslim contexts and detail culturally appropriate practices to combat this. The editors are clear to explain that religious identity is not the main focus of this book and that there are multiple reasons for sexual restrictions. The book’s main aim therefore is to share a more fluid understanding of Islam that encompasses issues over time and space. The book contains contributions from a wide range of actors from judges to activists to academics to create a book full of rich case studies and varied inputs.

The book is divided into two parts. Part I “Tools of Policing: The Politics of History, Community and Law” explores the history and context of Muslim countries. The chapters in Part 1 are about restrictions and investigate how people have used the term Muslim as a framework for control of sexuality in both Governmental and everyday cultural contexts. Part II “States of Contestation: Reclaiming Public Spaces”, explores the importance of public spaces and presents evidence of how Muslim societies are redefining and resisting constructions of sexuality and gender (p. 11). Resistance is important as in many Muslim countries sexuality is visibly restricted, therefore it is important and a strength of this book to detail the public spaces of resistance.

Understanding the restrictions placed on women’s sexuality are a key part of this book and in Chapter 3: “Moral panic: the criminalization of sexuality in Pakistan”, Hooria Hayat Khan explores restrictions through an examination of ‘honour’ killings. Khan argues that frequently women in Pakistan who conduct un-Muslim behaviour with regards to their sexuality become victims. Khan claims that the root of this problem is a patriarchal society whereby the law is not on the side of the women and families are rarely prosecuted by the justice system. Violence is used by men as a way of controlling sexuality, reinforcing masculinity and deterring other women in the family from mis-demeaning. Khan writes that in Pakistan laws are not implemented which have the good of the whole public in mind and the women’s movement must implement change that then enters the level of Governmental lawmaking. This chapter raises some fruitful thoughts surrounding who makes the laws and the culture of patriarchy, which has shaped laws surrounding marriage in Pakistan.

In Chapter 7, “Veiling transcripts: the private debate on public veiling in Iran”, Shadi Sadr focuses on the regime’s policy of compulsory veiling for all women in public through an examination of online space. Sadr writes that imposing this law has resulted in the “politicization of public space and mundane daily practices” (p. 183) and has meant that clothes and make-up have become political weapons. Due to the difficulties in researching public attitudes to these changes, there is little data, so the Internet should be seen as an important tool. Sadr was able to utilise a blog to ask women for their opinions on veiling, to argue there appears to be not a binary view as some believe but a wide variety of opinions. This ranged from some women believing it is imposed for a reason, to seeing it as a personal duty, while others saw it as a nuisance and objectification of their body. This chapter is fruitful in employing a research methodology that takes into account everyday stories to produce a wide variety of viewpoints on these restrictions to women’s sexuality.

When examining how women resist sexual oppression, in Chapter 10, “Living sexualities: non-hetero female sexuality in urban middle class Bangladesh” Shuchi Karim explores how sexuality for non-heterosexual females is understood in the patriarchal country of Bangladesh. Karim’s study concentrates on the private spheres of family life focusing on women who are contesting the female norm of heterosexuality (p. 271). Sadr explains that in Bangladeshi culture there are three types of homosexual relationships rendering non-heterosexual identity a contested sphere. Sadr’s chapter is interesting in its discussion of how women negotiate their different sexual identities and that sexuality in a Muslim context should be understood as fluid and interwoven with place. This argument is a convincing one in this book, with another chapter on Israeli family laws proving that in a Muslim minority country laws restricting women are bound up in place and society and not necessarily religion.

In the final chapter “Risky rights? Gender equality and sexual diversity in Muslim contexts”, editor Anissa Helie’s chapter asks us to consider the different ways that deny women and gay people rights. Helie explores why many Western views surrounding Muslim sexualities are often biased and urges us to challenge this. A crucial argument made by Helie is that when we declare ‘Muslim women’ victims we must also understand that there are many factors other than religion that oppress women. Helie writes that the policing of sexuality is not unique to Muslim societies and that gender equality is not a solely Western reform, sexual plurality existed in Muslim societies prior to their encounter with the West. Intersectionality matters Helie argues and sexuality is a contested and highly patrolled terrain in all societies (p. 307).

In conclusion, this book is one that should be read by all those interested in sexuality, religion, Islam, or gender. The wide range of case studies make it suitable for both an academic and general audience while the examples make it a stimulating and accessible read. This book urges the reader to consider Muslim sexuality from the local to global level and to understand there are both restrictions and resistance that are interwoven with not just religion but a wide range of factors. The only criticism to wage at this book is its tendency to focus overly on patriarchy as the main problem, with men overly blamed. While reasons for this are explained throughout when discussions of sexuality and gender are made, it urges the reader to question the relationship between patriarchy and religion. My concluding comment is that however you currently understand sexuality in Muslim contexts this book will definitely change it for the better.

Posted In: Africa and the Middle East | Gender and Sexuality | Philosophy and Religion