Barack Obama is widely considered one of the most powerful and charismatic speakers of our age. In Articulate While Black, two scholars of Black language address language and racial politics in the U.S. through an insightful examination of President Obama’s language use–and America’s response to it. Articulate While Black will be indispensible to anyone interested in Barack Obama’s politically raced relationship to language, writes Zalfa Feghali. 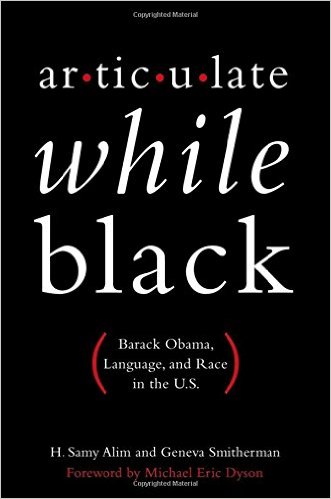 If there was ever any doubt that the United States has not in fact entered its fabled golden “postracial” age, H. Samy Alim and Geneva Smitherman‘s outstanding Articulate While Black: Barack Obama, Language, and Race in the U.S demolishes it. In this book, Alim and Smitherman, both distinguished linguists and experts in Black language and culture, argue that Barack Obama’s linguistic style-shifting is indicative of the United States’ continued inability to comprehend Black culture. This is a truly relevant book, its analysis running until just short of the 2012 US presidential election.

Alim and Smitherman focus on key moments in Obama’s candidacy and presidency to structure this study, interspersing close analysis of speech acts and events before moving to broader discussion of the implications of these acts within the field of Black language and communication. But what is genuinely most compelling about this book is the style and ease in which Alim and Smitherman present their argument; they are able to seamlessly move between Black vernacular speech (“one sista from Philly”) and more scholarly, academic prose in order to drive home their points about Obama’s effectiveness and style-shifting.

Connecting a wide range of material, such as Obama’s monophthongization of diphthongs (“Nah, we straight”) with the policing of Black language and the apparently impressive idea (to many white Americans) of being “articulate while black,” as well as “The Race Speech” and Obama’s linguistic relationship to the jeremiad and rappers such as Jay-Z and Young Jeezy, this book is more than convincing; it changes the terms with which many scholars of US culture will engage with the legacy of Obama’s presidency.

Chapter 4, “The Fist Bump Heard ‘Round the World: How Black Communication Becomes Controversial,” begins by recalling the moments after Obama secured the 2008 Democratic nomination for president of the United States. Alim and Smitherman convincingly argue that the ‘pound’ (or as much of the US press incorrectly termed “fist bump”) that the world witnessed between Barack and Michelle Obama was once again a gross misunderstanding of what they call “Black Folks 2.0.” After a brief overview of the press frenzy that followed this now famous ‘pound’, Alim and Smitherman skilfully move to an analysis of Black communication in the public sphere more generally, focusing on how the pound and the high-five have “crossed over” in what they (and Cornel West) call the process of AfroAmericanisation. However, the authors rightly note that even though these two (very specific) forms of non-verbal communication have become ‘recognizable’ to non-Black participants, there remains a cultural-linguistic gap in the case of verbal communication, which show “that rather than ‘postracial,’ America was and is a hyperracial society.” As evidence of this, Alim and Smitherman focus on the examples of the controversial terms nigga and muthafucka. This section of the chapter is genuinely interesting and informative, as the authors present the histories of both these terms to deliberately show how their ‘controversial’ nature “becomes controversial only in a society that deprecates Blackness.” Indeed, they conclude “if people continually deny this racially discriminatory context, mutual respect will prove to be elusive as a muthafucka.”

However, it is in chapter 6, “Change the Game: Language, Education, and the Cruel Fallout of Racism,” where Alim and Smitherman’s strongest contribution lies. Using their own fieldwork as evidence, they begin with the fairly uncontroversial premise that “[d]espite its grammatical complexity, the language of the Black child has been consistently viewed as something to eradicate, even by the most well-meaning teachers.” These teachers are primarily concerned with their students speaking “standard English” rather than “Black English,” which one teacher describes as “abrasive” and not “respectful.” Alim and Smitherman lament the fact that “despite the vitality of Black Language, teachers continue hearing what’s not said and missing what is” (reviewer’s emphasis). What becomes clear is that these teachers miss the stylistic flexibility that characterises Black language styles, which allow for a rich variety of verbal art games (for example). And what becomes painfully evident is that a fresh approach to teaching teachers the pedagogical potential of these “non-standard” language styles is urgently needed – an issue that could easily fill its own book, and is outside the remit of this one.

What follows instead is the authors’ own critical linguistic approach to language education, including exercises that allow students to develop an awareness of sociolinguistic variation through reflexive, ethnographic analyses. By providing high school students with the critical linguistic and ethnographic tools, Alim and Smitherman suggest that “we can stop apologizing for ‘the way things are’ and begin helping our students imagine the way things can be.” This allows students to think critically about “the relationships between language, racism, education, and power in society.” While this final chapter was certainly not short, and undoubtedly required the preceding chapters to be building blocks to synthesise, I found myself wishing this last chapter was its own book.

Articulate While Black will be indispensible to anyone interested in Barack Obama’s politically raced relationship to language, as well as those who may want to engage with a broader consideration of the relationship between language and race in the United States in recent years. It will certainly be on my ‘high-use’ bookshelf for the foreseeable future.

Posted In: Sociology/Anthropology | USA and Canada