For the people of twentieth century France, Abbé Pierre personified the revolt against injustice and precarious living conditions. A judicious combination of priest and critic of the Church, he dispensed charity and political attack with equal effectiveness. This book explores his role and position within Emmaus. How did a tiny band of ragpickers, emerging from the detritus of post-war Paris, become one of the largest NGOs in France, and a significant and highly cost-effective social enterprise? Mary P. Murphy finds much of interest. 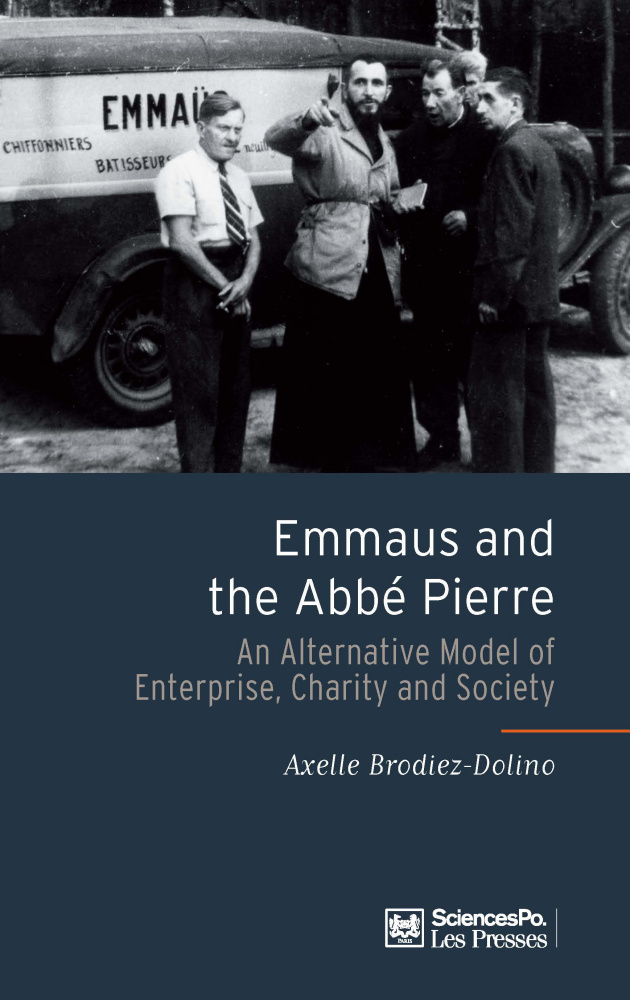 This 2008 book, translated into English from French in 2013, tells the story of Abbé Pierre, a French man who founded and dominated the international social enterprise and humanitarian movement Emmaus. A curious combination of social enterprise and political movement, the man and the organisation played a key role in French anti poverty and homelessness movements. The book charts their complicated interwoven history from the 1950s to the late 2000s and the tensions in applying their central principle – work not only to provide relief with delay but to destroy its causes, work not only to destroy its causes but to provide relief without delay. Abbé Pierre is a complicated personality, a resistance hero and pioneer, his creativity and orientation to action inspired the 1954 “Uprising of Kindness”. He also had clear fault lines; the book is an honest appraisal of the often tense relationship between man and organisation.

Emmaus is deeply enmeshed in Catholicism. It evolved in different countries in distinctive cultural ways, with clear differences in the relationship between church hierarchies and the nongovernmental organisations that comprised local Emmaus infrastructures, the institutional church, and the lay movement. One of the most striking evidence of overlap with Catholicism is in the hierarchical role given to clergy and the male domination of what often appears a deeply gendered institution. The book analyses the development of Catholic ideologies which informed Emmaus but which Emmaus also informed (p. 208). Such structural shifts in Catholic ideology were also informed by wider global politics, democracy, political economy and social policy. It is striking how the ‘68 movement informed developments. Both the Liberty and Fraternity branches of Emmaus engaged with post ‘68 discussion of utopia (p.170) and eventually broke from Emmaus. Elsewhere the Swedish branch developed a Marxist analysis and in Latin America the influence of liberation theology is highly evident.

The central theme of the book is the tension between ‘power’ and ‘balance’. While all identified with the unifying principle of service combined with political activism there was a tense standoff and animosity between two competing centres of influence: the community of UCC (Central Union of Emmaus) with their ‘ethic of responsibility’, and the UCAE (Union of Friends and Companions) who with Fr Abbé Pierre held an ‘ethic of conviction’. This central tension between a rights-based approach (conviction) and the basic respect for the rule of law (responsibility) is a fascinating one. The charismatic but controversial Abbé Pierre advocated rights-based approaches that included a defiance of the law where the law was an obstacle to rights. Squatting, for example, was both an immediate remedy to homelessness but also a defiant political act. Such a strategy creates inevitable tensions; immediate resolution of homelessness competes with longer term quality provision. Is service provision a professional business or based on a model of a social entrepreneurship? The reader is left with the impression that the institutional battle between those who saw Emmaus campaigning ‘for’ the poor and those who saw the essential struggle to be ‘of’ the poor was eventually won by those advocating the praxis model, and this is the ultimate legacy of Abbé Pierre. These tensions were ultimately managed with both traditions reconciled in the contemporary branch structure of Emmaus as it continues work with the oppressed on housing, migration and anti-globalisation, access to water and other campaigns.

Much can be learnt from the analysis of the end of the ‘trente gloriesues’ and the emergence of the new poor of the early 1980s. We are reminded that issues of household debt, rocketing unemployment, poverty, precarity and insecurity are not new but are a feature of previous recessions (p.336). The section outlining the campaigns for social rights and the 1988 minimum income (RMI) offers lessons relevant to contemporary campaigns for a fundamental right to a minimum income. Many of the social experiments to deal with household debt were pioneered in the 1980s and remain relevant today. In the 1980s crisis, Emmaus was politically relevant with a consultative relationship with governments of the day. Whether this level of consultation and participation exists in today’s crisis is less clear.

The author, Axelle Brodiez-Dolino, previously published on le Secours Populaire Francais and is a competent, meticulous researcher who pays great attention to sources. The book tells a complicated story and tells it well. To some degree the sheer complexity defies organisation but a different choice of structure may have enabled a simpler narrative. While the book chooses to follow a more or less chronological journey it also moves back and forwards in time as it develops the story of the various components of the broader family of Emmaus. This reader often got lost in this journey and at times drowned in too much detail. The organigram at the end of the book might have been helpful earlier and non-French readers might appreciate some basic maps and a timeline of post-1950 French history, politics and social policy.

As a sociologist I was taken with the clear role of sociology and sociologists in this history. Their legacy includes the qualitative research by ATD Quartre Monde in the 1960s (p.123) and their contribution towards a multidimensional understanding of social exclusion and the ground breaking study by Sorbonne sociologists Murray and Carlier. Since the 1990s, employment of a full time sociologist enabled the annual publication of a national housing barometer. This report on sub-standard accommodation in France is considered a clinical, critical and highly credible publication and is a key forum for debate and key campaigning tool (p.288).

Abbé Pierre died in 2007 was much loved and respected. In many countries, despite huge drops in levels of trust for the church as an institution, anti-poverty and housing advocates are often members of religious communities. In Ireland, the three best known advocates are Fr Sean Healy, Sr Stanilaus Kennedy and Fr Peter McVerry (none as controversial or colourful as Abbé Pierre). In Spain, a most unlikely heroine is leading southern Europe’s far left response to the crisis. Sr Teresa Forcades of Barcelona, guided by feminism and liberation theology, advocates a new political and social model based on self-organisation and social mobilisation.

The book begs some questions as to how the Emmaus model compares to other models for change. The 2012 US publication ‘Forces for Good’ identifies six non-profit campaigning strategies that optimise advocacy with services as an effective combination and powerful source of change: work with government to advocate policy change; see business as a powerful partner; convert individual supporters into evangelists for the cause; build and nurture nonprofit networks; adapt to the changing environment, share leadership, empowering others to be forces for good. The book is the story of Emmaus and Abbé Pierre’s struggle with these strategies and the inevitable tensions that arise when NGO’s attempt to both provide relief while remedying causes.