In this short text, Gérard Mairet suggests some leads for a new political philosophy at a time of environmental crisis. He aims to demonstrate how the concept of sovereignty can be rethought in view of that crisis, bearing in mind that huge areas of the world environment elude all sovereignty: the atmosphere, the high seas, the Arctic. Mairet shows that by focusing exclusively on what supposedly makes humans distinctive, political theorists have failed to deal with the essential ethical questions: whether nature has rights over humans and humans have the right to fulfill their basic biological needs, writes Melanie Conroy. 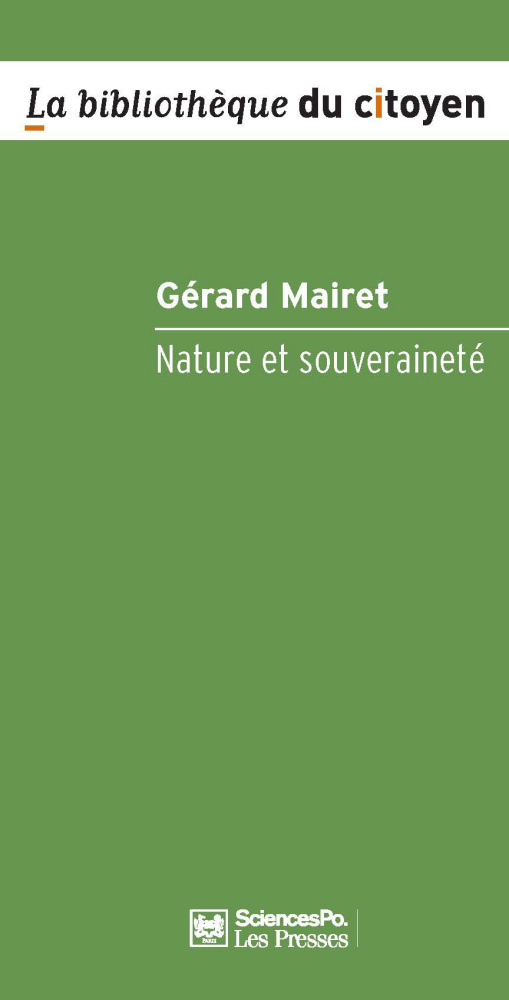 Imagine that a country experiences a serious drought. Its staple crop fails, reducing the supply of food to the population as a whole. Prices rise and the poorest cannot afford to eat. As a poor nation, this country cannot afford to import more of its people’s preferred food, nor foreign replacements. Since its tax revenues are much lower than previous years, the government cannot afford to buy enough additional food to meet the needs of the people. Foreign governments and non-governmental organizations step in to provide money to feed the poor but only after consulting with the nation’s government and their own stakeholders. By this time, thousands of people – including hundreds of children – have died. Who is to blame for these deaths?

In the case of a famine, there are many stakeholders with whom we could find fault. Should we blame the elite of the country in which the starvation occurs? Or maybe the rich countries and the NGOs who had pledged to fight hunger but failed to intervene in time? On the other hand, many would accuse the advocates of free-market capitalism who arguably left the poor country’s government with inadequate reserves to deal with the reduced tax revenue. Yet finding fault with a particular group ignores the broader problem: no one is obliged to feed the poor. And, more troublingly, the poor have no right to eat. Famine is the just one of the problems that Gérard Mairet, a French philosopher and professor at the University of Paris VIII, confronts in his latest book about political rights and responsibilities in an age of ecological crisis. In this very brief book, Mairet makes the radical proposal of a “biotic right” (“droit biotique”) that would assure a minimum of nutritional satisfaction for all (Chapter 3). His aim is not to lay out a practical plan for how to achieve universal nourishment but to conceptualize an abstract right to eat that could transform our understanding of international politics for the better.

Food security may seem like an oddly practical topic for philosopher – even more so a phenomenologist like Mairet – to take on. His abstract orientation, however, helps to shed new light on a set of problems that have become too politically charged: the ethics of deprivation, international economics, and environmental issues. Instead of debating the relative merits of companies, NGOs, and governments in reducing poverty, Mairet focuses on the conceptual assumptions that mean that people are allowed to starve. Looking beyond the pet solutions of left-wing and right-wing politicians, he targets the philosophical foundations of ecological disasters: a view of humanity as separate from nature and non-human animals, the concept of nature as a storehouse of materials to be used by humans, and the idea of political sovereignty as absolute (Chapter 1). For Mairet, these assumptions together lead humans to overvalue themselves as rational beings and to undervalue nature, as well as to forget natural needs like hunger in political discussions. As is common among phenomenologists, Mairet finds these assumptions throughout Modernity (with a capital ‘M’); he argues that they all flow from Descartes’s dualism. This is debatable intellectual history (it is attributing a lot of diverse views to one man), but Mairet’s argument that human arrogance has lead to the devaluing of nature and biological needs is convincing.

The third – and, to my mind, most interesting – chapter of Nature et Souverainté suggests what a “biotic right” would look like and how it could be made into law. It would be fair to say that Mairet remains within a statist paradigm, falling more on the side of government intervention and governmental control than free-market or NGO solutions. For Mairet, the solution to world hunger must move through all levels of government – from the national to the international. In the case of Europe, this means advocating for the “droit biotique” in the European Union and then at the United Nations.

The practical problems with Mairet’s theoretical approach to food security are obvious. It is hard to imagine many countries adopting this legal idea soon, much less successfully promoting it at the UN or in other complex democratic institutions. Further, solving world hunger is not as simple as a declaration because a right that is purely theoretical is no right at all. Nevertheless, this is an interesting book that makes a provocative critique of the assumptions of political theorists in positing a world of sovereign states without common ecological interests and a humanity that is separate from – and superior to – nature, and a world of sovereign states against a purely natural order. Whereas environmentalists have generally focused on the ways that economic theory fails to account for ecological costs, Mairet shows that political theorists – by focusing exclusively on what supposedly makes humans distinctive – have failed to deal with the essential ethical questions: whether nature has rights over humans and humans have the right to fulfill their basic biological needs – to eat and live.