This book draws together a range of educational pioneers and thinkers from the canon of philosophers and philosophical schools, from Plato and Aristotle, down to Edward Carpenter and John Dewey, with attention along the way paid to both individual authors like Thomas Hobbes and Mary Wollstonecraft, as well as to intellectual movements, such as the Scottish Enlightenment and the Utopian Socialists. Alice Marples finds that this book represents something of a call for links between political philosophy and education to be debated and discussed as critically in the future as they have been for centuries past. 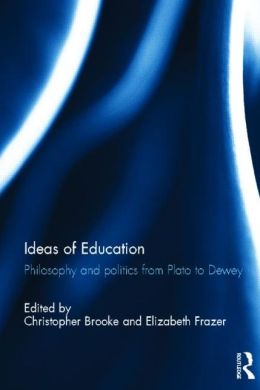 Ideas of Education is an edited volume of contributions from scholarly heavyweights across the disciplines of education, politics and political theory, sociology, and philosophy. The editors – academics in the subject of politics – claim this was done to further encourage discussion between these research areas, having become distant and isolated through disciplinary specialisation and departmentalisation. The aim of this book is to demonstrate the fundamentally important connections between educational and political theory and to promote analytical and historical wisdom in dealing with key concepts therein.

Neither the editors nor the contributors, therefore, make any apology for the fact that the thinkers featured in this volume are those of the traditional canon. In order to highlight the interlinking nature of educational and political philosophy, they have seen fit to deal with those thinkers whose theories have arguably had the most historical clout. That is, individuals such as Hobbes, Locke, Rousseau and Mill, and schools of thought spanning from the Stoics to the Scottish Enlightenment to Victorian pragmatists. Though one might not find any surprising appearances from historical figures discussed in this book, it is not merely a tired rehashing of the traditional version of analytical philosophical study – made famous by Arthur O. Lovejoy and his ‘Great Chain’ of dateless wisdom – which treated ideas as unproblematic units, and any alteration in the meaning of an idea was the result of a fundamental misunderstanding on the part of the practitioner.

The design of this book is, instead, to explore the various ways the historical canon of moral and political education has been interpreted and employed for immediate political and philosophical use throughout the ages: ‘History is not just one great philosopher, with her or his ideas of education and politics, in relation to their own time and place, after another. The transformation of ideas across contexts and across time is a matter of contestation, rejection, inspirational refashioning, and reinvention.’ (p.4) This aim is supported by the chronological structure of the book as well as the canonical content.

However, this does supply a false impression of unity. Because the primary purpose of the book is to place questions of education within traditional political and moral philosophy, many of the chapters represent in-depth snapshots of one small, specific facet of belief within a thinker’s body of work. Though avowedly not teleological in nature, such a structure simply cannot adequately demonstrate how multifarious and messy the notions of education have been throughout history, to either the individuals themselves or those who inherited their thoughts on the subject. Notably, none of the chapters deal with practical questions of knowledge transmission and transformation. These issues represent a form of scholarly ‘tidying’ which is as potentially worrying as it is useful, and undermines the stated aims somewhat.

Not only that, but occasionally the rigorousness of this scattered, individual discussion – particularly, I found, when dealing with difficult classical conceptual terminology in the first three chapters – can diffuse the overarching connections between the chapters and leave one a little lost as to what these interlinking intentions were. Conceptually, the book works better as a whole; practically, it is the other way round. It is aimed at, written by and likely most useful to researchers and scholars specifically dealing with the history of political thought and educational philosophy. This may be expected when tackling such a broad range of thinkers, and the difficulties are themselves more inspiring than debilitating, provoking the need for the uninitiated reader to explore these connections themselves and relate them back to their own work or discipline.

That said, certain themes do stand out in terms of their legacies. For example, most of the included speakers explore the problems inherent in the eternal attempt to ‘order’ knowledge, and rank it according to perceived use. This is particularly pertinent to current political discussions regarding fact-based learning, and the tendency for education (and funding) to be tailored to suit perceived skills gaps – usually in subjects where the need for such skills can be easily quantified and, therefore, are commercially viable. As Mark Slouka memorably stated in 2009: our present educational orthodoxy is economic. But it was not always this way, and this book is a timely reminder of that fact.

Similarly, there is repeated emphasis on the conceptual link between knowledge and virtue, and the unquantifiable practical utility of education in the relation between personal and public moral health. Regardless of political leaning or ideological motivation, the focus these diverse thinkers is on the imperative of self-cultivation within any form of education. A child must be inspired to use their own tools of reasoning, as Aristotle claims: ‘A true virtue is supposed to be good without qualification, so it must be guided by good judgement which prevents its possessor from going astray in challenging circumstances.’ (p.25) This is particularly interesting with regard to current UK government proposals for education which include the abolishing of coursework – a lengthy process of knowledge development which teaches important life-skills such as time-management, personal responsibility, and the rewards for working hard – in favour of an end of year exam based on facts learned.

At a time when historical and philosophical concepts are being thrown about to support particular political positions on education, this book amply demonstrates the dangers of cherry-picking such philosophical concepts. By interrogating in historical detail the conceptual connections between the power to govern and the power to educate, it proves just how ideologically charged any assumption regarding them can be. It also represents something of a call for such links to be debated and discussed as critically in the future as they have been for centuries past.

Alice Marples is a PhD candidate in the History department at King’s College London, holding a collaborative doctoral award with the British Library as part of the project Reconnecting Sloane: Text, Image, Object. Her research concerns practical and philosophical questions of information exchange, knowledge diffusion and social interaction. Her current focus is on the cultural history of British science in the eighteenth-century, looking at the scientific papers and correspondence of Sir Hans Sloane (1660-1753). She has previous degrees in early modern history from King’s College London and the University of Glasgow. You can find her on twitter @alicemarples. Read more reviews by Alice.