Samuel Hollander’s work on the history of economic thought has been provoking debate for over four decades. This book brings together key contributions of recent years, in addition to some brand new pieces, including an extensive chapter on Adam Smith’s often neglected arguments for government intervention in the economy to correct market failures, and his critical view of the business class as an anti-social force. If you are interested in political economy and have some grounding in the subject matter then Hollander’s essays make for engaging, essential reading, concludes Nick Taylor. 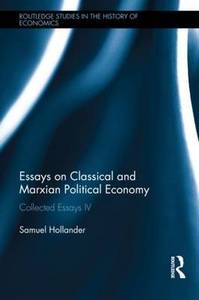 Samuel Hollander’s fourth volume of Collected Essays is, by all means, a book for those already acquainted with the history of economic thought. It is the work of an author who has such familiarity with his subject matter that each essay reads with the assumption of a thorough grounding in the subject.

Hollander completed his undergraduate in Economics at the LSE in the late 1950s. Since then he has held positions at prestigious universities across the world but mainly in Toronto, and, as of 2000, at Ben-Gurion University in Beer-Sheva, Israel. He has carved out a vast area of expertise on the classical economists and his list of publications is dizzying in length. What has made him so influential is his possession of a renowned fighting spirit in the development of an often-controversial perspective of the subject matter.

Fortunately for the reader, and certainly for the student of economics, this means his papers consist of a set of clearly argued and lively debates on the classical economics canon. This volume, which presents work from roughly the last decade, covers political economists from Smith and Bentham to Malthus, Ricardo, Marx and Sraffa, among others. One of his skills is his ability to make sense of the evolution of thought across such a daunting timescale, and this collection demonstrates this quality admirably. This same attribute, however, is where much of the controversy surrounding his work lies.

One of Hollander’s defining contributions to history of economic thought is his ‘New View’ of Ricardo’s relationship to the history of economics. There are many qualifications, but essentially the ‘new view’ (sometimes capitalized) revolves around the idea that an analytical heritage can be traced from Smith through Ricardo to neoclassical economists such as Alfred Marshall and beyond, based on their understanding of how prices are determined. Much of the debate has been with the Ricardian expert Terry Peach, and it has spawned many replies and rejoinders across the decades. In a later chapter of this volume we are given a ‘truly final word?’, suggesting Hollander is willing to pursue the issue further if challenged. It is likely that only readers with an already established interest in these arguments will have time for these debates.

The essays on Adam Smith open the volume with Hollander’s characteristic confidence: ‘General knowledge regarding Adam Smith is no further advanced than it was in 1868…’. The first of these essays pushes the idea, familiar with many historians of economic thought but not many economists, that Smith might be considered a ‘pioneer market-failure analyst’ as opposed to the father of laissez faire. The chapter is a comprehensive reconstruction of Smith’s principles on intervention to correct for market failure and shows one of Hollander’s greatest skills: his ability to take the propositions of eighteenth and nineteenth century economists in such a sincere manner as to outlaw any possibility that we might view them as anachronisms.

This more common debate over Smith’s general perspective of intervention is supplemented by a comparison of Smith and John Rae on matters such as infant industries and conspicuous consumption and further accompanied by an essay on Bentham’s critique of Smith’s stance on usury, and the need for a 5% maximum rate of interest. Reading this latter piece, in which Smith’s position on irresponsible ‘prodigals and projectors’ is outlined, leads me to imagine what he might have thought of payday loans and the consumer credit market today, where rates of up to 5,853% APR might be charged. Indeed, more appropriately still, the essay leaves us with the impression that Smith, who appeared to understand the risks of ‘over-trading and undue extensions of credit’, would have foreseen the recent consequences of banks overstretching their books with what turned out to be worthless and “toxic” investments.

The essays on Marx and Engels stand out because of the unusual way in which Hollander compares their positions on a number of issues – population control, distribution and the role of the entrepreneur – with other economists who are not necessarily of their time. Knight and Schumpeter – economists active in the early and mid-twentieth century – have a dialogue with Marx on the importance of the entrepreneurial and innovative figure of the capitalist, with the surprising result that Marx is shown to give more recognition to such a figure than we might previously have considered. Perhaps part of the reason why this works is because Marx himself worked out his political economy through critical engagement with deceased and contemporary economists.

This collection is continued testament to Hollander’s talent at bringing historiography and the work of the classics alive. The density of these collected papers, and the sheer complexity of all the connections made between dozens of different economists, make it difficult to review everything that is covered. Overall, one is left with the impression that political economy matters, and that developing a dialogue between economists of different eras is no easy task, but that we can learn something about many categories and conceptions commonly used and taken-for-granted today through the creation of such debates.

The final part of the book is dedicated to biographical perspectives. Here Hollander draws together the academic, the personal and the political in a readable set of essays. We are reminded how important academic friendships are for maintaining and shaping our interests, as well as questioning our claims. In the final essay, we are given surprisingly candid insights into Hollander’s depressed state of mind following retirement, only to be buoyed by the manner in which he is dedicated to research and tuition despite the administrative (and, dare we say political?) changes to the university system going on around him.

The few pages he dedicates to the religious and political circumstances of his now homeland, Israel, witness him turn his powers of textual analysis on recent developments in Zionist rhetoric and ideology. Even on this matter, political economy intrudes and classical, utilitarian calculation is balanced against natural law arguments; it is evident that here is a man who lives and breathes his life’s work in the history of economic thought. If you are interested in political economy and have some grounding in the subject matter then Hollander’s essays make for engaging, essential reading.