Infidel Feminism focuses on a distinctive brand of women’s rights that emerged out of the Victorian Secularist movement. It looks at the lives and work of a number of female activists, whose renunciation of religion shaped their struggle for emancipation. Laura Schwartz’s work adds richly to the scholarship on religious cultures and counter-currents in the 19th century, writes Sneha Krishnan. 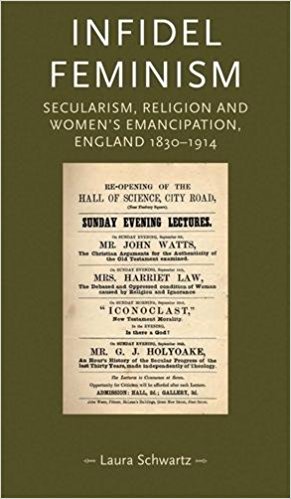 Laura Schwartz’s Infidel Feminism opens on a dramatic note with a scene from the 1860s, with British activist Harriet Law refusing to accept the Biblical story of the fall of Eve as the basis for human life. Defending Eve for what she reads as her defiant demand for knowledge from a patriarchal god, Law denounces at once both a Biblical tradition and prevailing societal notions that kept women less educated than men. This scene is in many ways illustrative of the tone of the book; capturing the drama of an early political movement dissenting against the Church and gendered hierarchy in radical ways that would transform not only prevailing public notions about women’s rights and roles, but also robustly contribute to debates on the wider politics of imperialism, monarchy and Britain’s industrial modernity.

Infidel feminists, as Schwartz explains, were a group of radicals from the Freethinking movement in late 17th century Britain. Freethinkers advanced critiques of the Christian Church and literal interpretations of the Bible, and we can identify Paine, Hume, Voltaire and Rousseau, as key examples. Over the mid and late 19th century, through the work of the Secularist Society founded in the 1850s, Freethinking came to gain popularity in Britain.

Associated with the more radical element in this movement, were freethinking feminists. Schwartz’s principal argument is that a study of these feminists – ‘infidel feminists’ – represents a missing link between early 19th century Owenite radicalism and early 20th century discourse on gender and sexual freedom which resulted in what we now understand as the ‘first-wave’ Feminist movement. Robert Owen, and others like George Mudie had, in the early 19th century, established utopian socialist communities across the UK, aiming for social transformation that was based on gender equality, and labour rights. This movement declined in the mid and late 19th century owing to a lack of ideological coherence. Schwartz’s argument is that even as Owenism was on the decline, its critiques had survived in the Secularist Movement, and especially among the radicals in this movement – the Infidels, who continued to retain some importance within Britain’s political landscape until the end of the 19th century. The ultimate demise of infidel feminism, she suggests, occurred with the discovery within Western intellectual circles of the occult and other religions, as viable alternatives to the two polarising positions of Christianity and radical atheism. In making this argument, Schwartz skilfully brings early 19th century radical Owenite thinkers such as Emma Martina and Eliza Macauley, in to conversation with later figures such as Annie Besant and Harriet Law.

In six chapters, this book examines not only the story of feminist secularists as they engaged with the public but also the debates and arguments that gendered critiques brought to bear on the Secularist movement, such as questions of free love and sexual autonomy. A diverse archive consisting of documents from legal trials and public debates over the publication of books on sex and sexuality, as well as contemporary pamphlets and other popular literature on birth control and its need are examined. Schwartz concludes by linking these debates with contemporary arguments on gender, and religion that have been occasioned in the last decade’s violent histories.

The chapter on love and marriage stands out as a history of feminist and radical critiques of marriage and for its narrative of emerging forms of middle classness in Victorian Britain, and associated practices of respectability. Rather than follow a broad brush portrait of Securalists as prudes, and anti-sensualists, as scholars such as Mason (1994) have done, Schwartz paints a more nuanced picture somewhat more familiar to contemporary debates within other dissident movements such as Marxism, where sex and sexuality were, for many years relegated to something of a secondary status as less important than other pressing issues of the time. The debates on marriage and love within Freethought, Schwartz suggests, posed a feminist challenge to the ideal of a rational secular public sphere within which such matters seemed not to matter – in other words, they were an early feminist challenge to the public-private divide even within radical movements.

Schwartz’s book succeeds in its narrative for many reasons. Prominently, it stands out in its consideration of the politics of empire in the activist movements in Britain. One of the Freethinking feminists whose life Schwartz discusses in detail, and indeed sets up as telling of the gradual decline of the movement, is that of Annie Besant (1847-1933), the former champion of Irish Home Rule, who proceeded to leave her husband, a vicar, when she became a Freethinker, stood trial with Charles Bradlaugh over a birth control manual in the 1870s, and ultimately converted to Theosophy and migrated to India. As a student of the history and politics of Madras, now known as Chennai – the city in the East to which Besant went both as Theosophist and political thinker – I was struck by this keen awareness of the politics of Empire that Schwartz. While much recent historiography in Britain has begun to consider the ways in which the colonies impacted politics in Britain as much as Britain’s politics changed life in the colonies, this is still under-studied in the realm of women’s movements and feminism. However, it is apt for Schwartz in light of her framing of this book as relevant in recent global-scale debates on religion, gender and politics.

In this light, one interesting direction for future research might be to consider the dialogues between Freethinking Feminist worldviews, and the women’s movement in places like India, and what women like Besant did to create those continuities. This would flesh out more substantially the transnational implications of secular feminisms in Britain that Schwartz only hints at.

Other than Besant, Schwartz also paints lively portraits of Harriet Law – best known for her gender critique of Marx at the International Workingmen’s Association, or the famous First International – and Harriet Martineau, Victorian pamphleteer, often lauded as the first female sociologist.

Schwartz’s narrative is persuasive because it is persistently aware of the constructedness of the two poles of Christian faith and atheism. Both are held as tenuously held opposites that are precarious. Unfortunately this rigour somehow dissolves into a rather too descriptive conclusion at the end of the book. This is particularly disappointing as the conclusion ties the narrative together and brings it in dialogue with post-9/11 debates on feminism. Here we do not read of specific activists and particular dialogues anymore, but only of “some feminists” who might support the choice of women in wearing the veil and others who might support the ban of the veil in their championing of secular public spheres. Further, though Schwartz mentions the rise of feminisms in non-Christian contexts, feminist criticisms of atheism do not feature in any significant manner in this conclusion. This again, is a critical gap because of Schwartz’s anchoring of her project around its contemporary relevance.

In sum, this book is a fascinating read, and a rigorously written history of a radical women’s movement. As such, it merits reading, and inclusion into our studies of feminism and women’s movement in Victorian times.