Violent urban schools loom large in our culture: for decades they have served as the centerpieces of political campaigns and as window dressing for brutal television shows and movies. Based on six years of teaching and research in the Bronx and Amsterdam, Toxic Schools is a fully participatory ethnographic study and aspires to be a searing examination of daily life in two radically different settings. Brendan Bartram finds many strengths. 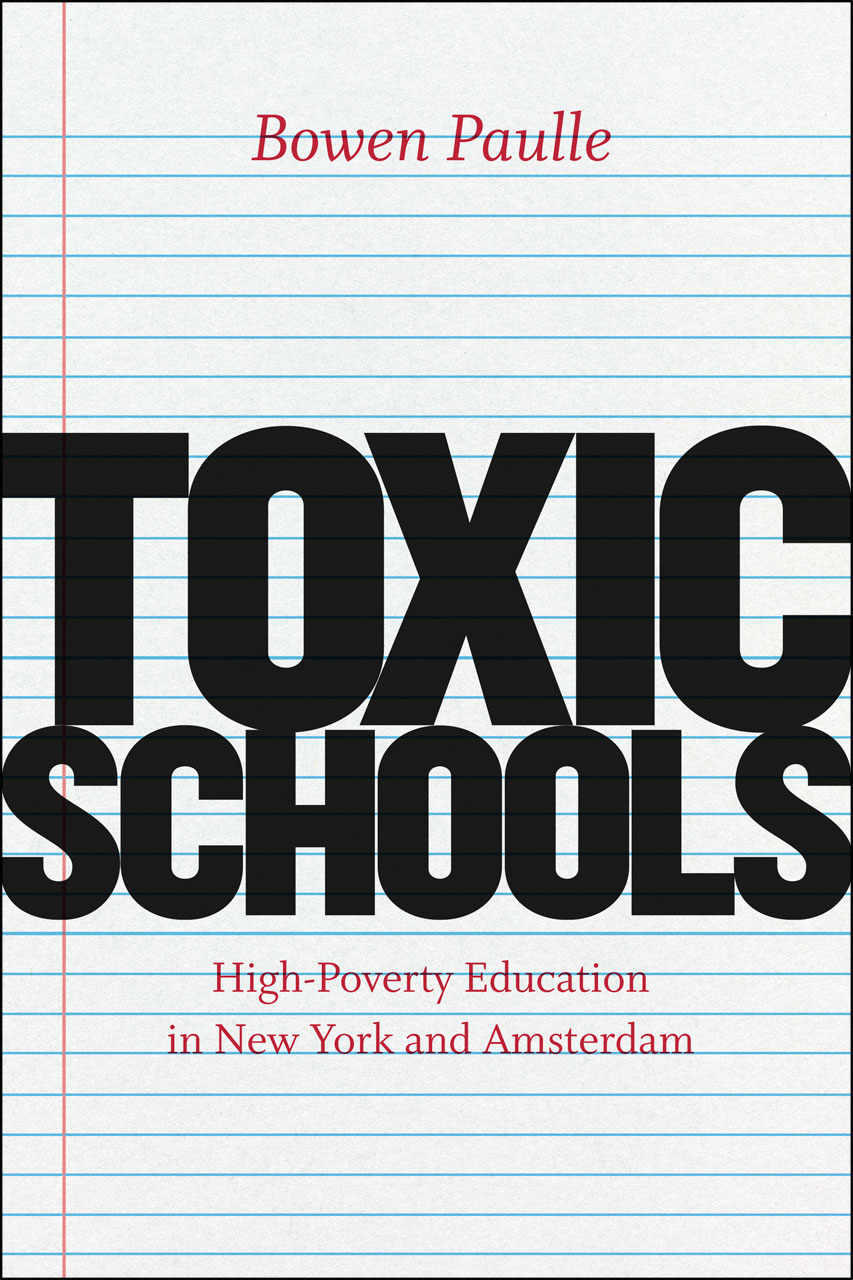 There is no shortage of books and studies that deal with schools and teaching in challenging urban contexts.  Anyone seeing the title of what is Bowen Paulle’s first book might assume that this is just another volume exploring the well trodden path through the day-to-day challenges of teaching in ‘tough’ schools, or perhaps yet another practical guide offering educational strategies for dealing with disadvantaged adolescents. The word toxic in the title might even suggest a rather sensationalist take on matters. On all counts, however, these assumptions would be wrong. What Paulle offers us here is much more than that. Based on six years’ ethnographic research as an insider teaching in failing urban schools on both sides of the Atlantic, the author provides us with a remarkably detailed, deep and often disturbing exploration of inner-city school life which uses the groundedness of everyday school realities as a basis for advancing academic debates around traditional race-based analyses of urban schooling challenges.

The ethnographic-comparative approach underpinning the work has to be one of its most original features. Paulle introduces us to a number of pupils and teachers at two schools in New York’s Bronx and Amsterdam’s Bijlmer districts, and through their detailed stories, the author provides us with insights that fascinate, persuade and elucidate, and at times shock and depress. A real strength of what must be described as a very serious and authoritative academic study is the fact that it often parks ‘the stale language of academe…to dive straight into the real-life currents perpetually reshaping the vulnerable teens we call students and undermining the forsaken institutions we call schools’ (p.xi).

The book addresses a number of persistently tantalizing questions about failing urban schools. It explores, for example, why it is that some pupils – who are not incapable of demonstrating that they understand the importance of positive educational attitudes and outcomes – more frequently engage in behaviours that are ultimately self-defeating. And just as intriguingly, Paulle investigates how – a depressingly smaller number of pupils – manage to overcome the odds and achieve success. In an attempt to answer these questions and others, the author enters the pupils’ life-worlds and explores the interactional micro-dynamics that take place in the schools. The picture that he fleshes out for us is a fascinatingly detailed depiction of schooldays that are almost entirely devoted to rehearsing complex repertoires of interactional rituals that serve to mark out and assert the pupils’ positions within localized peer status hierarchies. What Paulle reveals is the ways in which these rituals draw on emotion and violence to create and sustain all-consuming school cultures that are at best educationally debilitating and at worst corrosive or – to use the word in the title – toxic. The author leads us into the lives of pupils who occupy different positions along the ‘gangster to nerd’ status spectrum in both settings, and shows us how their school lives are dominated and affected by having to navigate their way through and participate in ‘more or less toxic webs of relationships, emotions and symbolic transactions’ (p. Xix). We see how the game of playing for position dominates the school day inside and outside of classes – how some, for example, work to maintain or claim higher ranks; how others become gradually seduced into the performances of power play; and how the majority seek the safety of low-profile survival in the audience of onlookers.

Paulle shows us how these social rituals, displays and micro-processes occasionally lead to explosive and violent incidents but how they are more generally involved in harmful school cultures that minimise learning and damage pupil and teacher (psychological) health. Though these patterns of interactions have specific gendered elements, the part played by ‘race’ is, in Paulle’s view, much less significant. In this respect, the author’s work may well be seen as somewhat controversial by educationists and sociologists who foreground ethnicity in their analyses and explanations of failing schools. As we move through the pupils’ life stories, Paulle explores the range of academic views in the field, and calls into question the adequacy of current academic theories that identify ‘oppositional’ black culture as a reason for educational under-achievement among certain ethnic groupings. Throughout what is a convincingly developed analysis, he reveals that the pupils he worked with were not engaged in cultural forms of resistance, or constrained by concerns about ‘acting white.’ We see throughout the book how ‘the students’ constructions of racial, ethnic and national identities were often more fluid and complex’ (p.12) and how such matters are constantly trumped by situational dynamics, interaction rituals and power performances.

The book also takes us into the lives of teachers working in the schools, and we see how a minority thrive while others survive, burn out or leave. As with the pupils, the reasons why some are successful relate to complex amalgams of background factors and dispositions, and one of the reasons why Paulle’s book is such a welcome contribution to ongoing debates around failing schools is precisely because it does justice to the sheer complexity of variables involved, and argues convincingly for a move away from simplistic and reductive accounts of the ways in which schools can be ‘turned around’. Some may consider this a rather bleak outcome – there are no easy answers or quick-fix solutions – but through the fine-grained analysis and authentic insights produced by research such as this that takes us right to the very heart of day-to-day school realities and pupils’ lived experiences, we get a chance to consider how we can ‘generate schools that bring out the best instead of the worst in them and our ourselves’ (p.213) – which surely has to be an optimistic note to finish on.

Dr Brendan Bartram is Senior Lecturer Education Studies at the University of Wolverhampton.

Posted In: Europe and Neighbourhoods | Higher Ed | USA and Canada