Based on original fieldwork in the Democratic Republic of the Congo, as well as research material from other conflict zones, Sexual Violence as a Weapon of War? aims to challenge the recent prominence given to sexual violence, bravely highlighting various problems with isolating sexual violence from other violence in war. The authors invite us to examine our own participation in Western aid efforts which have cast women solely as victims of rape, finds Katherine Williams. 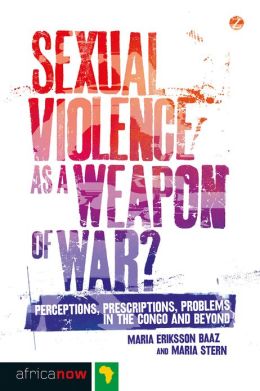 Sexual Violence as a Weapon of War? Perceptions, Prescriptions, Problems in the Congo and Beyond. Maria Eriksson Baaz and Maria Stern. Zed Books. May 2013.

If you’re academically interested in conflict-driven sexual violence then make Sexual Violence as a Weapon of War? a priority read. In conflict situations, ‘rape as a weapon of war’ is often used as a blanket term to analyse rape. Maria Eriksson Baaz and Maria Stern, of The Nordic Africa Institute, argue that this is something of a misnomer, and attempt to challenge dominant understandings of sexual violence in conflict settings primarily by deconstructing notions of gender, colonial lexicons and militarisation.

Eriksson Baaz and Stern claim that the dominant framework surrounding rape in conflict settings has become too universalising. They proceed to unpack this initially by exploring notions of the sexed/gendered body. Is it simply enough to equate all women in conflict settings as victims and all men as perpetrators of sexual violence?

The Sexed story, which the authors seek to dispel, extorts the notion that rape is seen as integral to war, as war is enacted and fought by men and men are helpless subjects of their biologically-driven needs (and therefore cannot be held responsible for their actions). According to the Sexed story, war suspends constraints that previously hindered men from being the ‘natural’ sexual beings there are, or can be (under the right conditions). Therefore, rape in conflict settings appears to be legitimised, and ultimately deemed inevitable. This analysis is nothing new, of course, but it is a pervasive myth that is often lazily backed up by Hobbes’s adage that man’s state of nature is “solitary, poor, nasty, brutish, and short”.

However, focusing on rape as a gendered crime, means focusing on how masculinities and femininities act on, impact, influence and provide roles for the Sexed body and how gender works to underwrite, or even produce the act of war rape. With these sex/gender analyses in mind, the authors apply their theoretical understanding to their specific case study of the Democratic Republic of Congo (DRC), the apparent ‘rape capital of the world’.

Eriksson Baaz and Stern begin their critical analysis of rape as a weapon of war by unpacking the victim/perpetrator dichotomy. They acknowledge that this is somewhat of a problematic task, not least because dominant discourses on the subject tend to be victim-centric. Not wanting to detract from the legitimacy of survivors’ stories, Eriksson Baaz and Stern never-the-less offer a different epistemological approach on why such acts of violence take place. Who are the perpetrators and what are their motivations?

The authors argue that this ruling dichotomy of perpetrators as abnormal and victims as normal is an unrealistic one. Whilst other groups and academics have focused singularly on the experiences of victims, Eriksson Baaz and Stern engaged in fieldwork with men who have committed rape within the DRC warscape, somewhat controversially.

By essentialising violence, the authors argue, we miss the opportunity to effectively analyse complexities and interconnections between subjects and violence. In comparison to other conflicts around the world, perpetrators of rape in the DRC are cast as exceptional players in modern warfare, so as well as this analysis conforming to the Sexed story (men being unable to control their base instincts), the authors also argue that this conception is highly racialised (i.e. ‘civilised’ people wouldn’t commit such acts). The motivations of the perpetrators are analysed and the ways in which the conflict in the DRC leaves men vulnerable to other forms of conflict-related violence (including: forced recruitment into militias, mass killings of men and boys, being forced to rape or kill others and forced labour) are also explored.

The authors argue that with a singular focus on rape, current discourses of understanding neglect the impact of other forms of violence and inequality suffered by women; loss of their families, homes and livelihoods and unfair property/inheritance laws. This is a position argued by other genocide scholars such as Adam Jones, who seeks to use gender analysis to explore the experiences of both women and men in conflict scenarios. Represented as rational actors in the ongoing conflict by dominant discourses, perpetrators, the authors argue, cannot fulfil any particular gender identity position due to pervasive notions of militarised masculinity which rarely correspond with perpetrators’ lived experiences.

Not only do Eriksson Baaz and Stern unpack preconceived notions of sex and gender in conflict scenarios (something I found especially helpful as something of a gender newbie), they also analyse the concept of strategy as purported by the phrase ‘rape as a weapon of war’ itself. Can this term be used to accurately describe what is happening in the DRC, given the above analysis and their experience working with perpetrators in the field? The authors would argue primarily that a breakdown in military discipline is the cause of rape in the DRC as opposed to a specific mandate (like the sanctioned rape camps in the Balkans conflict).

Sexual Violence as a Weapon of War? challenges dominant understanding of rape in conflict scenarios and also invites us to examine our own participation in Western aid efforts which have cast women as rape victims alone (and not women who have suffered in other ways, such as loss of family members etc) and our racialised notions of ‘saving people from themselves’, a pervasive colonial lexicon. The authors examine the prominence given to sexual violence and indicate the problems associated with isolating sexual violence from other forms of violence in conflict settings.

Eriksson Baaz and Stern have cast their critical eye over an extremely contentious and emotive topic. By examining the intersections between rape, war, gender, sex, colonialism and militarisation, they have produced a fresh analysis on the supposed use of ‘rape as a weapon of war’ in the Democratic Republic of Congo.

Katherine Williams graduated from Swansea University in 2011 in German and Politics, and is currently studying for a MA in International Security and Development. Her interests include the de/construction of gender in International Relations, conflict-driven sexual violence and grassroots feminist activism, being a co-founder of Swansea Feminist Network. You can follow her on Twitter @polygluttony. Read more reviews by Katherine.

Posted In: Africa and the Middle East | Gender and Sexuality | International Relations | Law and Human Rights