Bringing together a diverse team of leading scholars and professionals, Fair Shared Cities offers a variety of insights into ongoing gender mainstreaming policies in Europe with a focus on urban/spatial planning. Natalie Novick finds that through the examples of effective policy contained in these pages, the contributors shows how the successful implementation of gender mainstreaming is in the collective interest and it is possible that the city can be constructed more effectively into a place that is more equal for everyone. 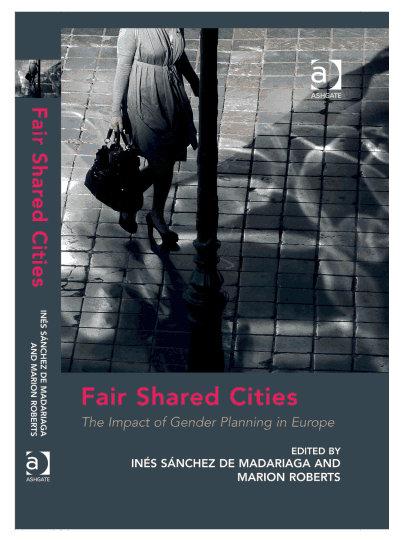 The relationships we have with the cities we live in remain highly unequal. The same urban environment that creates opportunity for one can be the place of crushing discrimination for another. While these inequalities may not be so apparent on the surface, everyone who uses, lives in and works in cities shares their own disparate experiences with efficiency, opportunity and safety. Cities and the urban environment help to structure these inequalities, but also to create them. Fair Shared Cities investigates one of these often underdeveloped urban fault lines: the role of gender.

Europe’s long history and legacy of men in the built environment professions has left an impact on urban spaces and identity, alongside structural inequalities. The title of this book serves to illustrate a paradox: not only are these cities unevenly shared, even in the best cases, but when urban planners and bureaucrats aim to include gender planning in city planning, the outcomes are often unequal. Far from being pessimistic, this text illustrates the many realms where gender planning can address these inequalities, and shows how gender remains important in understanding how urban inequalities are structured and exercised. Importantly, it makes the case that gender is important for understanding how cities are used, and must be considered by bureaucrats and urban planners when developing future plans and policy.

In Fair Shared Cities the editors have cultivated a wealth of contributors, including both academics and practitioners. Across eighteen chapters divided in four parts (Mainstreaming Gender-Sensitive Concepts, Structural Framework for Gender-Sensitive Urban Planning, Learning from Urban Planning Experiences and Learning from Architectural-Design Project Experiences), this text covers an extensive range of areas in where gender is significant in the urban environment, for example, with regards to safety, transport, space and housing. In Chapter 3, “Mobility of Care: Introducing New Concepts in Urban Transport”, Inés Sánchez de Madariaga examines the relationship between urbanization, transportation and care work. Care work, often unpaid (as understood here) is overwhelmingly done by women. She describes how single-use zoning regulations on building and land use can result in a constrained, single use landscape that can make daily life difficult for those working outside those landscapes. Commercial, retail and industrial land often receives a greater portion of physical infrastructure funding compared to land classified for residential and educational purposes. Even as the lives of women and men in Europe are becoming more equal, differences remain in the form of responsibilities in care work and the market. By charting individuals’ routes through the city, de Madariaga finds how these differences result in discrete patterns of how men and women travel through the city and utilize transport. These results illustrate how transport policy that focuses only on paid employment can marginalize and disadvantage care workers and those not in formally paid work.

Importantly, the text investigates the disparate outcomes of European gender mainstreaming initiatives. The European Union’s support of a feminist network aimed at producing gender-sensitive planning projects is evidence of an overture towards a more equal and thoughtful environment. However, the contributors show that across Europe, gender mainstreaming is understood with different emphases in different contexts. Despite EU efforts, the incorporation of a gendered perspective to planning is not widespread and is not widely understood. In the cases where EU policy dictates gender planning, the translation and implementation of policies across countries, regions, and languages is not always consistent. In Chapter 9, Heidrun Wankiewicz finds that despite clear goals and incentives for gender mainstreaming, the results across European projects remain uneven. This piece examines the role of the EU and regional development and weaves together the varied structural drivers for integration and the outcome on gender planning. Wankiewicz finds that “the concept of gender planning has not been and is not a best seller”. Strong resistance to the word has limited the effectiveness of programs within the planning community, and difficulty remains in including women in greater aspects of the design process. In Chapter 11, “Gender Mainstreaming as a Strategy for Sustainable Urban Planning” Doris Damyanovic recounts the difficulty of defining and including gender equality objectives in the planning process. Damyanovic shows that successful implementation of gender planning requires the awareness of these gender equality objectives, and a commitment by practitioners to understanding the interrelationships between gender, space and power and their function in the built environment.

A product of a conference of the European Urban Research Association, the text is a joining of both theory and practice. The chapters are concise and specific, and its structure allows the editors to bring together a wide variety of research on an array of gender planning issues. In some cases, the text could be a bit more focused, and despite the effort to contain chapters within the four section headings, there is not always consistency from one chapter to another. Despite the volume’s breadth, there are many more areas that could be covered here. While the editor’s stress it is not a textbook and that it does not aim to be comprehensive, some areas do get more attention than others. Austria, and Vienna specifically, as a model city for gender mainstreaming, receive a disproportionate amount of attention, while the countries of Eastern Europe are barely mentioned. The case studies, while providing a great deal of depth, do limit the understanding of gender mainstreaming across Europe as a whole.

While not intending to be an even survey, the differing viewpoints presented by each contributor effectively illustrate the challenges gender mainstreaming faces, and provide a well-rounded and stimulating assessment of the thematic concepts. Using a wide variety of cases and experience, the text is at its most promising when suggesting the way forward for gender mainstreaming. Among the potential outcomes suggested by the contributors include the further development of multi-use space, the incorporation of top-down gender planning management, and the greater emphasis on walkable cities, illustrate the multifaceted ways that gender can be incorporated in our environment. The editors suggest that goal of this text is “not to provide ‘the answers’ but to inspire and engage readers to continue to ask questions”. On this account the text is incredibly thought provoking and its varied contributions would suit a variety of educational contexts, from undergraduate and graduate courses on urban planning, gender and European politics to practitioners and policymakers.

Fair Shared Cities helps provide a greater understanding of how cities and the built environment structure and perpetuate gendered inequalities, and how gender planning can be more effectively implemented. Importantly, the authors show that initiatives toward gender mainstreaming have at times been met by resistance, highlighting the interplay of both local, state, and European institutions needed for success. By contributing to the under theorized literature on the role of gender and urban environments, the text encourages the reader to think deeper about their interaction with their city and the variety of inhabitants in it—and possibly to question the logic of the apparatus that emphasizes plowing the roads to the traditional business core first, before residential areas, schools and old age homes. In many ways it is a call to action, both scholarly and in a real sense. Through the examples of effective policy contained in these pages, it shows how the successful implementation of gender mainstreaming is in the collective interest and it is possible that the city can be constructed more effectively into a place that is more equal for everyone.