What is the state of social inequality today? How can students situate themselves in the debates? In Social Inequality, Louise Warwick-Booth presents an introduction to the key areas, definitions, and debates within the field. Matthew Wargent believes that this text will undoubtedly find a home in the discipline of social policy, and will be of interest right across the board, not least in human geography, political studies, journalism and political sociology.

Against the backdrop of austerity politics and increasing inequality of many forms in the United Kingdom (income, health, social mobility, education to name a few), Louise Warwick-Booth’s Social Inequality is a well-constructed introduction to the multifaceted nature of inequality in contemporary society. The text is primarily aimed at undergraduate level students and introduces the key definitions and debates, but its highly readable style means that this book will appeal to a wide readership.It has been suggested that social justice and inequality have become the defining political issues of the modern era and testament to this is the near cult status of Wilkinson and Pickett’s The Spirit Level which figures heavily throughout, as do the perspicacious and creative insights of Danny Dorling. Social inequality is a burgeoning field of study and this text will undoubtedly find a home in the discipline of social policy, and will no doubt be of interest right across the board, not least in human geography, political studies, journalism and political sociology.

The book’s nine chapter structure begins by defining social inequality before moving on to more substantial discussions around specific social divisions, the effects of globalisation and the efficacy of social policy in combating inequality. As with many texts of this nature, each chapter attempts to distil a topic that is often served by a (sub-) discipline in its own right – not an easy task but for the most part Warwick-Booth achieves a well-balanced discussion, seemingly devoid of too great an ideological agenda. This is combined with a pleasing willingness to discuss alternatives to the neo-liberal consensus that has descended on the UK over the three decades, which has arguably been consolidated since the financial crisis of the late 2000s (seen most obviously in the retrenchment of the welfare state). Not least among these alternative viewpoints is the recognition that one of the failures of social policy in combating social inequality concerns the inability, or perhaps lack of desire, to tackle the capitalist system itself (p.185); instead the discipline prefers to work within the confines of the neoliberal, deferring to the destabilising effects of exclusively chasing growth.

Social Inequality is designed to cover some substantive topics in a small space and correspondingly the text follows the format of learning outcomes, reader exercises, summaries, key questions and further reading that are familiar to most textbooks of this nature. This approach fragments the text into brief and readable segments whilst the inclusion of YouTube links, online newspaper articles and so on add an up-to-date and interactive edge to the learning experience (although inputting convoluted website addresses can be cumbersome). The guides to further reading are supplemented with an explanatory paragraph for each text rather than an unhelpful reference alone, and encouragingly the key learning tasks urge the student reader to develop their own ideological position rather than simply proselytising, an approach that will no doubt prove useful to students in the long run. There are some areas where the discussion feels slightly insubstantial, perhaps a concession to the introductory nature of the text. Chapter 8 which deals with social policy and its relationship to inequality provides a necessarily broad brush approach to an infinitely complex nexus that admittedly could take up numerous textbooks on its own. However, here the author misses an opportunity to capitalise on the fierce and increasingly significant debates around the present UK Coalition’s social policy. The author asks whether global powers really want to achieve social equality, yet little room is afforded for discussion of the current administration save for the admission that the ‘UK Coalition government is focused on welfare retrenchment and cutting back public spending, which is likely to increase inequalities further’ (p.184).

The author does entertain arguments that she clearly does not agree with, for instance referencing Daniel Ben-Ami’s 2010 book Ferraris for All: In Defence of Economic Progress, which argues – using China as an example – that the poorest can still benefit from economic growth even where inequality is widening. The ‘rising tide lifts all boats’ argument is given short shrift in favour of Dorling’s contention that there needs to be a deeper understanding of the benefits of more equal societies. Whilst this feels like an attractive solution – if only people realised how much life might be improved by a more equal society then maybe they would work towards it – it’s hard to see how such greater understanding can be fostered. The aforementioned cult status of The Spirit Level does not appear to have affected UK social policy thus far (though it may yet if the spin off documentary reaches a wider audience) and indeed the book has even inspired hard-hitting rebuttals such as Christopher Snowdon’s The Spirit Level Delusion. Nonetheless Warwick-Booth compiles a compelling argument for a change in ideology even whilst recognising the scale of such an effort.

The final chapter addresses potential solutions to social inequality. This practical discussion epitomizes the pragmatic nature of this textbooks approach, oriented as it is toward social policy, avoiding the political philosophy angle typified by Elisabeth Anderson’s ‘What Is the Point of Equality?’ Perhaps there could have been a discussion about some of the more innovative albeit controversial social policy alternatives such as basic income and the only briefly mentioned Tobin tax. The chapter that addresses globalisation and the global dimensions of inequality is a strength, in particular the way it problematises the subjective nature of inequality on a global scale. Perhaps inevitably, the complex intricacies of social inequality are open to interpretation and ideological agendas a fact that is stressed throughout, which makes the conclusions feel tentative in places. Nonetheless, Warwick-Booth has provided a highly readable introductory text that will be accessible to everyone interested in this area of study, and I highly recommend it for those embarking on studies of social inequality.

Matthew Wargent is a PhD student at the University of Sheffield where his ESRC funded research concerns the nature of democratic participation and political empowerment in the United Kingdom. 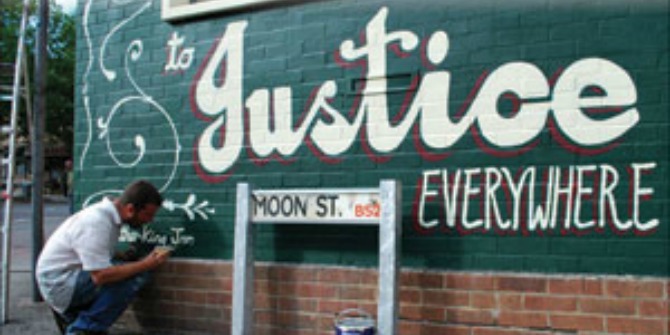