In this fast-paced world where everything is just a ‘click away’, more and more readers are choosing to ‘skim and skip’ rather than to give their full attention to the written word, believes David Mikics. This book aims to demonstrate how the ‘tried-and-true methods’ of slow reading can provide a more immersive and fulfilling experience. The author’s writing is fluent and passionate throughout, although Aidan Byrne finds the book’s main assertions and purposes to be deeply conservative. Byrne is left wondering why Mikics has so little faith in his presumed audience; more people are reading more books than ever, and they’re not all reading Fifty Shades of Grey. 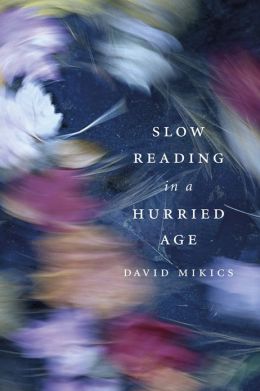 David Mikics’ Slow Reading in a Hurried Age is really two books. The first, which comprises the first three chapters (‘The Problem’, ‘The Answer’ and ‘The Rules’) is a somewhat dyspeptic and defensive polemic about the contemporary media landscape. The second book, consisting of ‘Reading…’ Short Stories, Novels, Poetry, Drama and Essays’ is equally familiar but more old-fashioned, being the latest contribution to the didactic tradition of guides to insecure, infrequent readers aiming to improve themselves. On my shelves, for example, are Guy Pocock’s 1942 Brush Up Your Reading, Ruth Padel’s recent 52 Ways of Looking at a Poem and a range of other fascinating popular guides to the literary universe. The internet is also full of breezy sites such as Selfmadescholar’s Ten Ways Reading the Great Books Can Improve Your Life. More canonical authors have tackled this genre too: F. Scott Fitzgerald put together a reading list for his nurse: he recommended a lot of Proust, some Arnold Bennett, Katherine Mansfield, and Tolstoy amongst others. Her response is not recorded.Of Mikics’ first chapters, this reviewer could only respond with is a sigh and a shake of the head. Mikics is not unaware of the tradition of literary Jeremiahs, invoking the ‘barrelful of polemics’ written by academics to ‘save reading’ while describing them as ‘tweed-jacketed scolds’ for their terror that television would render us all incapable of reading books. Into this category he consigns Mortimer Adler (author of How To Read a Book, 1940), Charles Van Doren who revised Adler’s work in the 1970s, and Neil Postman, author of the apocalyptic Amusing Ourselves To Death. Mikics dismisses them, yet eats his cake too: where they went wrong, he says, is that their dire predictions weren’t dire enough. They failed to envision ‘the ever-present environment of words that envelops us like the air we breathe…everyone reads constantly, and badly…’

The internet has put everything in a new light: lightning quick, yet blurry. The casual, makeshift sentence is now prized as more vital than the adept, finished one. Eloquence and careful elaboration seem mere time-wasters belonging to an older, less wired generation. Could Proust, who cherished the rewards and punishments that time affords the soul, have borne the Era of the Tweet?

Perhaps Proust might not be on Twitter, but I suspect haiku master Bashō would be right at home.

How Mikics differs here from the purveyors of moral panics is hard to discern, despite his scorn for previous generations. His concern is that quality is replaced by speed: ‘engulfed by a never-ending flood of text, we barely have time to stop and reflect’ and he has details the ways in which our brains have been ‘rewired’: ‘Children and teens have become addicted to the continuous activity of clicking, the herky-jerky rhythm that rules their young lives’. It is worth noting that this book is not intended to be an academic contribution to the literature, but it is problematic that Mikics reports the views of an ultra-Orthodoz Jewish rally against the internet, ‘growing perceptions’ and a survey as though they are valid research. For a writer concerned with the patient examination of words, this reviewer found that Mikics is far too eager to appropriate scientific terminology without any justification or self-consciousness, which makes me dubious when it comes to relying on any of his other sweeping statements. Whenever Mikics opens a clause with ‘we’, I found myself writing ‘you’ in the margins. His concentration is short. He can’t read a chapter without checking Twitter, Facebook and e-mail. He is paralysed by choice and tempted by the quick fulfilment of a websearch but he has to assert the universality of what he reckons. So infected is he, that even in the middle of an interesting discussion of Robert Frost’s poem ‘Design’, he recommends ‘quick Googling’ to establish the ‘horrible aspect’ the spider in question really has: surely a vote of no confidence in the poet while subverting his own insistence on switching off such distractions.

Perhaps the targets in these first chapters are new but the sentiment is little different from those expressed by Ecclesiastes, Socrates, Erasmus and Seneca (‘the abundance of books is a distraction’), or Kevin Barry, who described the difficulty of sitting down to write a novel: ‘already I am in that impatient, flitty, online mode: I bound about like one of those neurotic petrol-sniffer hares you’ll see at the Dublin airport car park’. It’s despairing, deeply-felt and yet entirely impressionistic and unconvincing. Most frustratingly, Mikics has no sense of structural context. We read badly, he says, because computers interrupt us all the time. Not because we work longer hours for less pay; nor because schooling has become a matter of satisfying the requirements of badly-designed exams and leaping up the league tables. Instead, it’s because our moral fibre has been weakened by instant gratification.

The rest of the work consists of a slightly highbrow version of Pocock et al. Despite declining the label of ‘self-help’, Mikics’ book seems to be exactly that.

‘I can’t promise you that slow reading will help you become a better person, to make more money, or to find true love. But in a subtle way, you will be transformed, and your life will become more interesting as a result… slow reading changes your mind the way exercise changes your body:  a whole new world will open; you will feel and act differently’.

Mikics’ solution is rather old-fashioned. Having run a Great Books programme, he calls for a return to close reading of largely canonical texts, though with an American bias for an imagined readership of motivated, nervous, hurried American readers keen to experience the ‘sophisticated pleasure’ of reading famous works. Mikics is profoundly dissatisfied by higher education’s approach to literature: ‘English departments eagerly submit to current trends…the desire to read books subtly and with love, to get lost in the world an author has created, has increasingly given way to commentary on social fashions and media images…the history of social life has become the true subject in some English departments’. Sadly – and in line with the rest of the book – he fails to name these departments. Instead, he calls for a return to a simpler, hierarchical relationship between an author and the reader achieved by sticking to a number of Rules. These range from switching off electronic devices, reading patiently, thinking of oneself ‘as a detective looking for clues’, comparing beginnings and endings, looking for Signposts to Using a Dictionary. Authors are unproblematic in his structure: they have a Basic Thought, a dominant Voice amongst the text’s panoply, they have Key Words and a Style. The reader’s job is to winnow the text to arrive at ‘the Nut’: the author’s nugget of wisdom. In Mikics’ literary landscape, the author is alive and kicking: the reader’s job is to recognise her or his genius (‘the more sympathetically we think about a writer’s choices, the closer we come to the writer…a reader can develop a point of view and… “be herself” the more she yields to an author’s vision. Such yielding is not surrender, rather an admiring, respectful struggle with the author’), though he generously allows us to dislike any particular text.

Mikics’ chapters on reading particular genres are helpful to a novice reader to some degree, though their advice is general, inflexible and sweeping, albeit studded with sensitive and interesting readings of specific texts. Most of them could have been written in 1950, and it is this aspect which troubles me. The reading strategies in Slow Reading advocate reading in a vacuum: the reader’s response is deliberately limited, and there’s no interest in Barthes’ relocation of meaning or in any critical approach other than a simplified version of Leavis. Despite his denials, Mikics’ book is in fact self-help, though who exactly it will help is unclear. The book’s assertions and purposes seem deeply conservative, as do its cultural horizons, and the opening chapters’ attacks on the contemporary media economy set up straw men to the point of embarrassment. No doubt Mikics would see this criticism as an example of the academy’s estrangement from ‘real life’, but I’m left wondering why he has so little faith in his presumed audience. More people are reading more books than ever, and they’re not all reading Fifty Shades of Grey. Why exactly Mikics thinks they need such basic instruction and rescuing from a social media morass he can’t prove exists is entirely beyond me.

In Mikics’s favour, his writing is fluent and persuasive throughout: as a polemicist he’s provocative and entertaining. When it comes to the exposition of particular poems, short stories and novels, he has an eye for detail and nuance which will hopefully persuade the novice readers at whom Slow Reading is aimed to read not just for the plot but for a text’s literary qualities and subtleties.

Aidan Byrne is a Senior Lecturer in English and Media/Cultural Studies at Wolverhampton University. He specialises in masculinity in interwar Welsh and political fiction, and teaches on a wide range of modules. He blogs as Plashingvole.blogspot.com and tweets as @plashingvole.