A new focus on private renting has been brought into sharp relief by the global financial crisis, with its profound impact on mortgage finance, housing markets and government budgets. Kath Scanlon finds Private Rental Housing: Comparative Perspectives a readable and well-organised introduction to private rented housing systems in other countries. The contributors are all well-known housing scholars (mostly economists), and provide a good overview of the various policy frameworks that condition private renting—including overall housing policy, rent and tenancy regulation, and tax treatment. The careful reader will come away with a better understanding of why simple policy transfer is not straightforward, especially in an area as complex, culturally meaningful and system-embedded as housing. With London local elections in the offing and national elections next year, housing, and particularly private renting, has emerged as one of the country’s top political issues. Some 17% of households in England (and 25% in London) now rent privately. The private rented sector, or PRS, has nearly doubled in size since 1990, a phenomenally rapid change given that housing tenure normally changes rather slowly. An increasing number of middle-income families priced out of home ownership now choose (or are forced) to live in rented housing for the long term, despite the insecurity of a series of short leases.

Saying ‘most other countries don’t work like this,’ Labour leader Ed Milliband announced in early May that if elected his party will make three-year tenancies the norm and introduce limits on rent rises within a tenancy. So how do other countries work? Private Rental Housing: Comparative perspectives, edited Tony Crook and Peter Kemp (the UK’s foremost experts on private renting), provides a timely and readable examination of the nuts and bolts of private renting in six European countries (including England), plus Australia and the USA.

The editors’ chapter on England explains the factors behind the sector’s near-doubling in size over the last twenty years. Two developments lie behind this: first, the abolition of rent and tenancy controls in 1988, and second, the introduction of Buy-to-Let mortgages for small landlords in the mid-1990s.

The 1988 Housing Act deregulated England’s PRS at a stroke. Before that, rents were controlled and private tenants could be evicted only with difficulty (in fact, there are still a few protected tenants with pre-1988 contracts and low rents). This regulation contributed to the gradual exodus from the sector of landlords who couldn’t make a profit. But now private landlords were free to set rents at any level, and the strong security of tenure which tenants enjoyed was stripped away, giving landlords much more control over their properties. Since 1996 the standard form of tenancy has been the Assured Shorthold Tenancy. This lasts from six to twelve months, at which time the landlord can ask the tenant to leave with two month’s notice.

Despite the sector’s strong growth, England has seen little new construction of purpose-built private rented housing—rather, landlords rent out dwellings that were previously owner-occupied or social housing. This is a longstanding policy concern; the current government and several of its predecessors have tried to increase the amount of new-build destined for the PRS, and in particular to increase investment by institutions like insurance companies and pension funds. These policies have been slow to bear fruit: only recently have the first schemes started to appear.

The rented sectors of two countries are often favourably compared to that of England: Germany because of the many middle-income families who rent, and the USA because financial institutions are major investors in private rented housing. What can we learn from looking at how they work?

Germany, as Peter Kemp and Stefan Kofner tell us, is indeed very different. About half of households rent (rising to 87% in Berlin), and many middle-income families regard their rented dwellings as permanent homes. Leases are indefinite—German tenants have the right to remain in their dwellings until they die—and landlords can only raise rents in line with average increases in the local area. German landlords, like English ones, are predominantly individuals who own only a few properties, but a surprising 41% are retired people who rely on rental income to supplement their pensions, and are therefore happy to count on long-term income streams from secure tenants.

But we shouldn’t look only at the PRS itself—its role is affected by housing context in the round. So it’s important to know that real house prices have been almost flat in Germany for decades. The English tenant who can’t afford to buy a home may forego significant capital gains, but the German tenant has no such regrets. And ‘moreover, the idea of a “housing ladder”, into which households buy as early as possible and regularly trade up to more expensive homes, ins unfamiliar to Germans, for whom the motto is more like “once in a lifetime”,’ say Kemp and Kofner. All this suggests that a permanently increased role for the PRS in England may require a major change in housing culture—are we prepared (or likely) to accept this?

The US is often held up as an example of a country where institutional landlords predominate, but in fact most rental properties are owned by individuals, as the chapter by Russell James II makes clear. Unlike in England, where dwellings are owned separately, in the USA large multi-unit buildings (known as multi-family properties) are often in single ownership. These properties are more likely to be owned by corporations, limited partnerships and Real Estate Investment Trusts (REITs). ‘As property size increases, the likelihood of both corporate ownership and professional management also increases,’ James says. This suggests that in England as well, institutions may be more likely to invest in large-scale new blocks of flats than in portfolios of scattered existing dwellings.

James’ chapter describes a highly decentralised system in which the federal government has a relatively small role in housing policy. States and individual municipalities can establish their own policies, and take widely divergent approaches. While in 35 states rent control is explicitly prohibited, local governments in four states (California, Maryland, New Jersey and New York) do impose rent controls—and these include some of the country’s biggest cities.

With this book, Crook and Kemp provide a readable and well-organised introduction to private rented housing systems in other countries. The contributors are all well-known housing scholars (mostly economists), and provide a good overview of the various policy frameworks that condition private renting—including overall housing policy, rent and tenancy regulation, and tax treatment. The careful reader will come away with a better understanding of why simple policy transfer is not straightforward, especially in an area as complex, culturally meaningful and system-embedded as housing.

Kath Scanlon is a Research Fellow at LSE London. She specializes in urban and housing issues, particularly housing finance and social policy. She has recently carried our research into how the Olympics will affect London. Read more reviews by Kath. 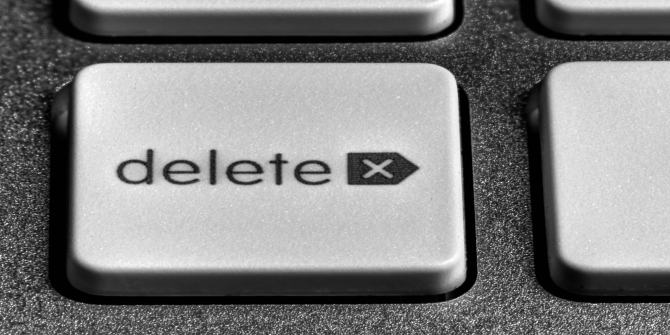 Book Review: Ctrl + Z: The Right to be Forgotten by Meg Leta Jones