Institutions do not decide whom to destroy or to kill, whether to make peace or war; those decisions are the responsibility of individuals. This book argues that the most important aspect of conflict resolution is for antagonists to understand their opponents as individuals, their ambitions, their pains, the resentments that condition their thinking and the traumas they do not fully themselves grasp. The originality of this 14 chapter book lies in the combination of theory and practice in its emphasis on the human element, writes Caroline Varin. It will appeal to IR students and those interested in the intricacies of peace processes.

The Fog of Peace is a refreshing perspective on conflict resolution written by two experienced practitioners: Giandomenico Picco describes his experience in the field of UN diplomacy and hostage crisis negotiations, particularly in the Middle East and the Persian Gulf, and Gabrielle Rifkind combines her expertise as a psychotherapist with a background in academic analysis. Together they draw common-sense conclusions in their book that can inform policy analysts and researchers involved in conflict and peace-building.

Inspired by Errol Morris’ documentary The Fog of War, Rifkind and Picco highlight the difficulties of peace-making, which largely result from a general lack of empathy that obstructs politicians from realising the problems on the ground. This book makes an important contribution to the field of non-violent conflict resolution by shifting the focus from the state to the individual, thereby engaging the support of the local population in the process. The authors employ evidence-based research and case-studies, such as the Iran-US negotiations since 1979 and the ongoing peace process in Israel, to supports their arguments.

The originality of this 14 chapter book lies in the combination of theory and practice in its emphasis on the human element. Both authors highlight their experiences working with individuals to reach political goals despite institutional deadlocks. Policy-makers and bureaucratic institutions often fail to acknowledge the trauma of conflict in local populations and resort to “hermetically sealed” high-level negotiations far from “the complexity of the multiple influences that determine conflict” (p.3).

Yet psychological factors play a significant part in perpetuating conflict by creating narratives of victimhood and shaping collective memory. Emotions such as pain, anger, and fear certainly fuel grass-roots political choices and often lead to violence if they are not responsibly managed. Rifkind argues that practicing empathy and acknowledging the experience of the ‘other’ can encourage dialogue. This is a necessary first step towards establishing trust, itself a pre-requisite for any ceasefire or armistice.

Picco describes the importance of trust and personal relations in conflict resolution, and shares a glimpse of his role negotiating the release of hostages in Lebanon and Iran. He explains that he was a preferred interlocutor for the negotiations between Hezbollah and Israel because of his perceived detachment from institutional politics, despite the fact that he was working directly for the Secretary-General of the United Nations. Indeed, Picco was able to nurture a certain amount of trust on both sides of the negotiating table by acknowledging the experiences of all parties involved and capitalising on his own charisma.

Unfortunately, Picco does not expand sufficiently on the political and logistical intricacies of his function, thereby leaving the reader hungry for more.  Nonetheless, his personal achievements, including a part in the negotiation process that ended the Iran-Iraq war in 1988, are remarkable and support his conclusion that “the individual matters and what he can do quietly behind the scenes makes a difference” (p.131).

A second important question that Picco and Rifkind explore is whether there can be peaceful alternatives to war. Violence is often the first port of call when differences arise between populations, and participants rarely consider the consequences or exit strategies before resorting to arms. Using the war in Syria as an example, the authors suggest that there are tools that can mitigate the risk of war, including early warning systems, political reform, and mediation. A less intransigent approach on the part of the international community, and the United States in particular, could also improve the odds for mediators to reach a compromise between the parties involved in the conflict.

Once the violence has begun, however, it quickly becomes entrenched in the minds of the population and manipulated by the politicians. This has led to seemingly ‘never-ending’ wars where a peace process appears beyond reach. Nonetheless, Picco and Rifkind offer an alternative interpretation: peace is attainable, but depends on the “human face of peacemaking” (p.209). For example, despite a long stalemate in Northern Ireland, the IRA finally started negotiations with the government when Martin McGuiness’ son “reached the same age he had been when he first picked up a gun”. This highlights the importance of leadership and individual perception in perpetuating or resolving a conflict.

Likewise, the Israel-Palestine prospects for peace depend largely on the leadership of the country and of its sub-national groups. While Prime Minister Benyamin Netanyahu “appears not to believe that peace between Israeli Jews and Palestinians will bring security”, his predecessor Yitzhak Rabin was ready to sign the Oslo Accords. Perhaps it is just a matter of timing and opportunism?

Picco and Rifkind conclude that peace-making and reconciliation are viable options for all wars, but require international cooperation and entrepreneurship. They argue that individuals, such as Picco, and small teams empowered by the international community could play a more significant role in negotiations and conflict resolution, so as to bypass the cumbersome institutions currently in place. In order to do this, the major powers would need to be less dogmatic in their approach to other nations and prioritise the option of peacebuilding over war-making. As Hans Blix has advised, “if you want peace, prepare for peace” (p.240). Peace – like war – requires preparation, vigilance, economic support, and political will.

Caroline Varin is a lecturer at Regent’s University where she specialises in global conflict and international security. She received her PhD from the London School of Economics and is the author of Mercenaries, Hybrid Armies and National Security, forthcoming from Routledge. Read more reviews from Caroline. 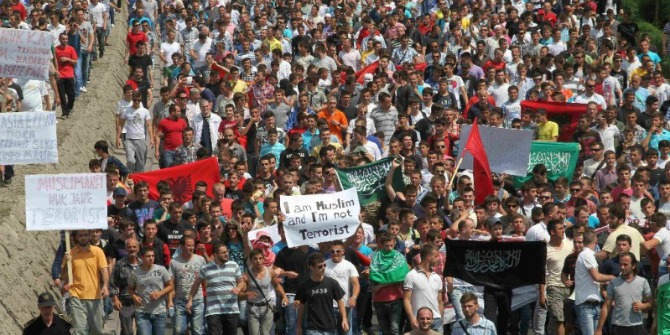