Comprising 47 chapters, The Routledge Companion to Mobile Media, edited by Gerard Goggin and Larissa Hjorth, is an important resource on mobile media. Niall Flynn finds that this book’s value lies in its diversity; some chapters interrogate methodological approaches to the subject, and others demonstrate these approaches in action. The constant developments in mobile media make it an exciting field of scholarship, and this book exploits these exciting energies. 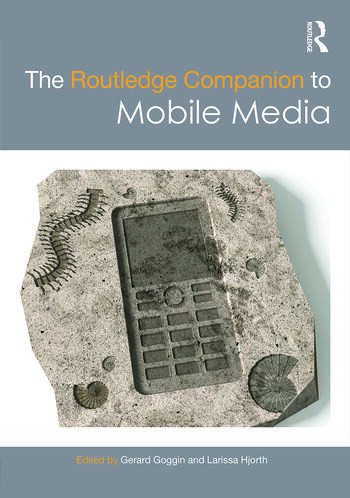 Mobile communication, data privacy, and “selfies” have all beenmaking the news recently. Look at any headlines, in fact, and you are likely to see something concerning mobile devices; you may well even be looking at them on your smartphone or tablet. Since their introduction in the late 1970s, mobile devices have reached an extraordinary level of development, achieving market penetration in the 1990s, and saturation today, with their promises of mobility, ubiquity, and instantaneity.

Topics including social media, mobile Web, media convergence, the media-“reality” interface, among many others, have been addressed across the humanities and social sciences. Several edited collections offer broad pathways into the field, for instance Mobile Technologies: From Telecommunications to Media editedby Goggin and Hjorth (2009), The Mobile Media Reader editedby Arceneaux and Kavoori (2012), Studying Mobile Media: Cultural Technologies, Mobile Communication, and the iPhone edited by Hjorth, Burgess and Richardson (2012), and Mobile Media Practices, Presence and Politics: The Challenge of Being Seamlessly Mobile edited by Hjorth and Cumiskey (2013). The strengths of these works lie in the diversity of approaches and breadth of scholarship.

The Routledge Companion to Mobile Media, edited by Gerard Goggin and Larissa Hjorth (Australia-based researchers who are pioneers in the field), is another important resource on mobile media. As the authors point out, scholarship on the topic has been dispersed across publications and disciplines; this book aims to bring the scholarship together and to be an authoritative reference work. Through seven sections and forty-seven chapters, it presents a wide range of approaches to mobile media. The editors point to the universal and global scope of the book:

While its global impact is undeniable, in each location we see how the mobile phone shapes, and is shaped by, the everyday. In other words, as global as the mobile phone is, it is also local upon every level. Far from even in its uptake, the mobile phone reflects and amplifies existing inequalities while also providing new avenues for expression and agency. (p. 1)

To reflect the uneven nature of mobile media, the book’s contributions adopt a variety of methodologies and approaches to the subject matter.

Leopoldina Fortunati’s contribution (“Understanding the Role of Mobile Media in Society: Models and Theories”) gives a good sense of what is at stake in studying mobile media. Mobile media are at the centre of technological innovation: “their heterogeneity across platforms, content, and media makes them challenging to study and define” and Fortunati finds “there is a need to systematize studies to date” (p. 21). This chapter focuses on the mobile phone as the most representative device of mobile media. It maps the ways the mobile phone has been understood, shows the limits to these understandings, and suggests new models of understanding.

Fortunati outlines four main ways in which mobile media have been understood: as technological artifacts designed for information and communication, as relational objects that act in power relationships with humans and human society, as technologies defined by their uses, and as socio-technical systems that elaborate a generalist notion of how technology and society interrelate. She favours the latter framework because it does not look at specific technological devices, but focuses on “the complexity of general situations” (p. 23). This is an appropriate framework due to integration and convergence among various mobile technologies: we use several devices in everyday life, together, and sometimes all at once.

Fortunati proposes a new model to overcome the limitations of various theories on the power relations between mobile technology and society, which works in two ways: it introduces the categories of space and time, and thus makes it possible to contextualise media in a particular context, and it conceptualises mobile media as cultural objects that interact not simply with society as a whole, but with producers and users of technological artifacts. The chapter’s success lies in its discussion of the implications of the theories presented. These are theories with broad relevance to anyone studying mobile media, regardless of their disciplinary association. Fortunati is self-assured in her criticisms of prevalent models of technology and her suggestions for future research.

Many of the contributions work through the kinds of suggestions Fortunati makes. Kyoung-hwa Yonnie Kim’s chapter (“Genealogy of Mobile Creativity: A Media Archaeological Approach to Literary Practice in Japan”) adopts something similar to the technology-society-user-producer model. It also demonstrates the geographically specific case-study form that many of the contributions take. Kim analyses Japanese mobile media within the specific framework of Media Archaeology, a subfield of Media Studies that is attracting much interest at the moment.

Kim argues that cultural forms of creativity, such as keitai shôsetsu (“mobile phone novel”) and hagaki bungaku (“postcard literature”), should be understood not in a linear new/old form of development, but as complex cyclical forms. In this light, such mobile media forms share structural similarities with email, literature, and photojournalism, and do not offer categorically new or “fresh” experiences. Combining ethnographic field research and close scrutiny of her sources, Kim arrives at satisfying conclusions. Participatory forms of culture attributed to digital media can be seen in these earlier media in a “grassroots” form. This contribution demonstrates a productive way to conceptualise mobile media, enabling them to be related to a range of media technologies “despite the chronological gap and difference in social backgrounds” (p. 222). However, it is too brief to go into as much detail as I would have liked; something that is observable in many of the book’s chapters.

As a whole, this book’s value lies in its diversity. Its chapters are brief but suggestive. Some interrogate methodological approaches to the subject, and others demonstrate these approaches in action. It is not comprehensive, but that would be impossible due to the nature of its object of study. In this shifting landscape, I’m not sure “definitive” is a term able to be used. The constant developments in mobile media make it an exciting field of scholarship, and this book exploits these exciting energies.