Since al-Qaeda’s attacks on the World Trade Center in New York in 2001, Islam and the Muslim world have been the focus of countless media reports, many of them uninformed. In this new publication, three Australian academics and journalists bring their experiences together in a readable account of how the Western media has dealt with the Muslim world in the past 15 years, writes Tessa Szyszkowitz. 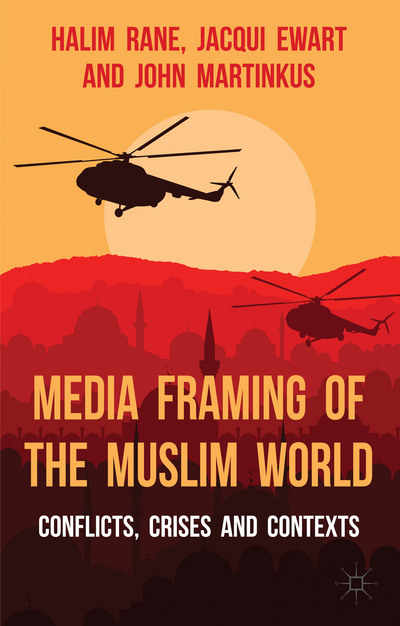 Ever since 9/11 and the subsequent “war on terror”, the connection between terrorism and Islam has posed a challenge to journalists in the West: “Transcending stereotypes…to uncover information that exposes the truth” (p. 110) is one of the issues raised in this timely study.

Media Framing of the Muslim World comprises eight chapters, contributed by three academics with many years of real-world experience in journalism and reporting behind them: Halim Rane, (Associate Professor in Islamic Studies at Griffith University, Australia), Jacqui Ewart (Associate Professor of Journalism and Media Studies at Griffith), and John Martinkus (Lecturer in Journalism, Media and Communications at the University of Tasmania, Australia). Anyone interested in media representation and the war on terror – journalists and experts with Middle East experience like myself included – will not be disappointed.

Chapter 6, “The Arab Spring”, puts into context the recent conflict in the region and how this was first represented in the media.At the beginning of the Arab revolt in the winter of 2011/2012, the uprisings “were framed as movements for freedom and democracy and not Islamist revolutions. They were non-violent and were not jihadist”. This, the authors state, was a testament to a change in discourse across the Muslim world: “The uprisings were more inclusive, comprised of Muslims and Christians as well as Islamists and secularists” (p. 113). The prevailing wisdom up to the Arab Spring was that only Islamist movements had the power to mobilize enough followers for a revolt. The democratic character of the revolt was enforced by the involvement of NGOs and human rights groups.

This chapter also presents a deeper investigation into the role of social media in the Arab uprisings. Often called ‘Facebook-Revolutions’, the revolts saw information spread rapidly via social media. However, the decisive source of information still seemed to be television.According to an Abu Dhabi Gallup Centre study in 2011, 81 per cent of Egyptians relied on Egyptian state television for information about the unrest and 63 per cent on Al Jazeera, while only 8 per cent, mainly the younger generation, took social media as a main source of information. To suggest that social media triggered the revolutions – as the Egyptian Facebook-activist Wael Ghonim claimed in his book Revolution 2.0 –  is, according to the authors and many other contributors to the literature, “an overstatement” (p.117).

The weakness of this investigation of media framing is that it does not look at diverse Middle East or world news outlets but only considers “the Western media”: a monolithic block of mostly hostile reporting in regards to the Muslim world. Reporting on the Middle East has always been a minefield of political sensitivities. In general, the United States has been less critical of political allies like Saudi Arabia or Israel, while France and Britain have close links and also more complex relationships with former colonies or influence zones in today’s Tunisia, Syria, and Palestine. Due to historical reasons Germany has been more supportive of Israel than other countries in Europe. To a certain extent, the media in these countries reflect the policies of their governments. These nuances are not sufficiently explored in the book.

Although the authors have produced a concise and interesting chronology of the history of discourse on Islam and how it is represented in Western media, they arguably do not always come to completely credible conclusions. In the case of the political conflict in Egypt in July 2013, they claim that “Western media generally followed the lead of Western governments in raising little objection and even avoiding the term “military coup” to describe the events”. But would it in fact have been right to call the events of July 4th a military coup? The rather complex truth of the Egyptian political quagmire was reflected very clearly in many of the leading international media outlets. In an analysis on July 4th 2013, the BBC’s Middle East editor Jeremy Bowen wrote: “The military’s move against the Muslim Brotherhood was well planned. Intervention must have been in the mind of the army chief, Gen Sisi, for some time. Muslim Brotherhood activists were arrested. Islamist TV stations were taken off the air”. The BBC website quoted the Facebook page of overthrown president Morsi denouncing the “military coup”. Reports like this are not mentioned in the book.

The authors conclude the chapter by noting that “audience concern is firmly rooted in a concern with Islam in politics which suggests the enduring relevance of Orientalism and Islamophobia” (p.124). Orientalism certainly plays a role in many Western reports, but one of the striking characteristics of Western media dealing with the Arab Spring was the general openness towards a democratic revolution. The authors point out: “With the election of Islamic oriented governments in the aftermath of the revolutions,the Western media became uncertain, and support for the new regimes declined amid a growing chaos of new protests” (p. 134).It is, however, not the fault of Western media that newly elected Islamist governments failed to establish democratic rule.

In the final chapter “Moving on from 9/11”, the authors bring their analysis of the development in the understanding and perception of Islam among Muslims and non-Muslims to a conclusion. This is particularly interesting as the authors discuss findings from research in Australia; a location not frequently connected with studies on 9/11 and terrorism. “Our study suggests that the mass media have not remained static in their representation of Islam and Muslims and that there has been an evolution in journalistic practice in respect to the reporting of issues concerning Muslims and Islam, at least in respect to 9/11” (p. 162). Coverage of the ten year anniversary of 9/11, the authors note, was carried by the feeling of reconciliation and remembrance, and al Qaeda was presented as outside of the Muslim mainstream. This is judged as progress.

Media Framing of the Muslim World ends on this rather optimistic note. With their study of the conflicts, crises, and contexts of this sensitive subject, the authors have certainly contributed to a better understanding of the media, its logic, and the complexities of the Muslim world. Anyone covering the Middle East and those interested in the role the media plays in shaping our opinions will profit from this book.

Tessa Szyszkowitz is a London based author who worked for years as Middle East and Russia correspondent for German speaking media. She holds a doctorate in history of the University of Vienna. Her dissertation was published in German under the title “Trauma and terror” and discussed the influence of collective trauma on national movements in the case of Chechens and Palestinians. Her latest book was a biography of the Palestinian diplomat Issam Sartawi. She also writes a bilingual blog on www.tessaszy.com.