In The Politics of Third Wave Feminisms: Neoliberalism, Intersectionality, and the State in Britain and the US, Elizabeth Evans produces a volume that discusses the concept and practice of intersectionality and the impact of neoliberal policies on third wave Feminism in Britain and the US, writes Isabel Lopez Ruiz, who recommends it to anyone with a passing interest in Feminism, specialist or otherwise. 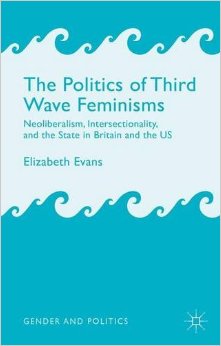 Looking for an authoritative account of third wave Feminism that is refreshingly aware of recent political developments in Britain and the US? Then look no further. In The Politics of Third Wave Feminisms: Neoliberalism, Intersectionality, and the State in Britain and the US, Dr. Elizabeth Evans lucidly discusses the concept and practice of intersectionality and the impact of neoliberal policies on third wave Feminism in both countries. In so doing, she produces a text that deserves to be read by anyone who considers themselves to be a feminist in the twenty-first century.

The Politics of Third Wave Feminisms is clear and accessible, even when discussing its intricate methodology. What is most encouraging about Dr. Evans’ volume is that each chapter strikes a balance between her own academic discussion of different feminist topics and the opinions of feminists from Britain and the US. Each chapter features both, ensuring the book remains grounded in real-life, empirical experiences of women on either side of the Atlantic. As a committed feminist who is very active in online discussions, I found myself nodding and agreeing with so many of the opinions that were put forward. This is the first time my experiences have been reflected in an academic textbook and it is encouraging to see an academic discuss issues that are so closely aligned to those featured on social media every day.

It is also very refreshing to see how up to date the text is. From terms such as ‘rape culture’ and ‘cis-privilege’, to current discussions concerning the disproportionate effects of austerity on women and the importance of online activism, this volume is completely in sync with contemporary feminist discourse. Dr. Evans does not shy away from discussing nuances and discrepancies between groups of feminists, producing a narrative that is commendable in its clarity and concision, but never patronising. She, quite rightly, does not portray feminists as a homogenous group, but instead explores the differences and similarities within different factions of Feminism, including intersectional and radical feminists.

In chapter 4, special attention is paid to feminist inclusivity, that is, the ways in which third wave Feminism accommodates different groups of women. The chapter is divided into sections concerning race, trans, sexuality, class, age and disability, and examines the practice of intersectionality in feminist circles. Of particular interest is the section about trans inclusivity, given the current push for a movement that respects and embraces trans women through popular figures like Laverne Cox and Caitlyn Jenner. Dr. Evans’ discussion is eye opening, even for those of us who are familiar with current feminist activism. For example, she points out how age can often be a barrier for older women, as there is no focus on specific concerns such as widowhood and the menopause.

Dr. Evans’ comparative approach works particularly well in chapter 8, which discusses abortion legislation and reproductive rights in Britain and the US. The differences between the two countries come alive in Dr. Evans’ account, as she concisely develops the history of abortion legislation in both countries. Once again, it is very satisfying to observe how up to date The Politics of Third Wave Feminisms is, as it even includes Missouri Senate candidate Todd Akin’s remarks made in 2012 about ‘legitimate rape’. In the case of Britain, it even mentions the pro-choice group My Belly is Mine, which sought to stand in solidarity with Spanish women against a proposed reform to Spain’s abortion law. The text rightly acknowledges that the proposal was subsequently dropped. From Roe v. Wade to contemporary debates about personhood across different US states, this chapter is both engaging and necessary.

Given the academic nature of the text, Dr. Evans does tend to sit on the fence on many issues, focusing on presenting different arguments rather than offering her opinion, which can sometimes be frustrating for opinionated readers. To counter that, however, she does offer a substantial list of secondary sources which support every feminist standpoint under the sun. Anyone looking for an authoritative introduction to any of the issues discussed in this volume will have plenty of material to get them started. As a small pitfall, I did notice the omission of anti-Nordic model and pro-sex work activism in Britain, which has become quite prominent in recent months.

Overall, however, The Politics of Third Wave Feminisms ticks all the right boxes. It is accessible, authoritative, engaging, and relevant; I even found it inspiring on a personal level and I am sure many others will agree. I would thoroughly recommend it to anyone with a passing interest in Feminism, specialist or otherwise. It works as both a first port of call for anything third wave-related or as a self-contained volume. Dr. Evans (rightly) concludes that the battle for equality is far from over, reminding us that being a feminist has never been more important.

Isabel López Ruiz is currently completing an MA in Twentieth-Century Literary Studies at Durham University, having previously graduated from the University of Granada (Spain) with a BA in English Language and Literature. Isabel has written articles for the Times Higher Education (both online and in print) and The Huffington Post. She also sub-edits Palatinate, Durham’s Student Newspaper. Her research interests centre on feminist literary criticism and 20th century women’s poetry, especially Sylvia Plath. She tweets at @packt_sardines. Read more reviews from Isabel here.

Posted In: Britain and Ireland | Gender and Sexuality | USA and Canada