By combining a human geography perspective with graphic representation, The Social Atlas of Europe sets out to explore European identity through the social realities experienced by Europeans. Patricia Hogwood finds the authors’ unique approach highlights the unifying features of European social life and the subtle fragmentation of ‘Europe’ that is often masked, or at least obscured, by the logic of the nation state. The work harnesses state-of-the-art geographical information systems and new cartography techniques to reveal a European identity more essential, more fluid and more intriguing than traditional perceptions allow.

As a third Greek bailout is agreed ‘in principle’ by the European partners, the question posed by Ballas et al of how to characterise Europe in the 2010s could not be more timely.  Will this decade prove one of pan-European solidarity or will we look back on it as the decade of austerity, mass poverty, growing inequality and social exclusion? The authors’ conceptualisation and representation of Europe as its people conveys hope for mutual understanding and support across the nations, but also issues some stark warnings.

The work’s individual chapters quite literally map European social realities across a wide range of areas including: cultural identity, population, social cohesion and inequalities of education, health and wellbeing, politics and policy and interaction with the environment.  Each chapter is framed around a map or set of maps supplemented by an interpretive narrative with supplementary information. The technique of keeping the maps simple and elaborating information in the text makes the information accessible not only to geographers, but to social scientists from every discipline.  Beginning with the most fundamental levels of cultural identity and demographic profiles, the work builds, cumulatively and very effectively, a vivid and complex picture of our European social reality.  At the same time, each chapter works on its own terms and can be used as a free-standing account of one aspect of social life.

Colour and spatial distortions are used creatively to convey the meaning of the data each map incorporates at an almost intuitive level.  For example, a colour scale is used to identify the length of each country’s association with the European project and each country retains its designated colour throughout the atlas.  The latter helps to identify countries at a glance where the inherent social inequalities experienced in different territorial areas ‘distort’ the overall outline of Europe beyond recognition to minds more familiar with traditional cartographic representations. In these maps, population is often used as the key variable. 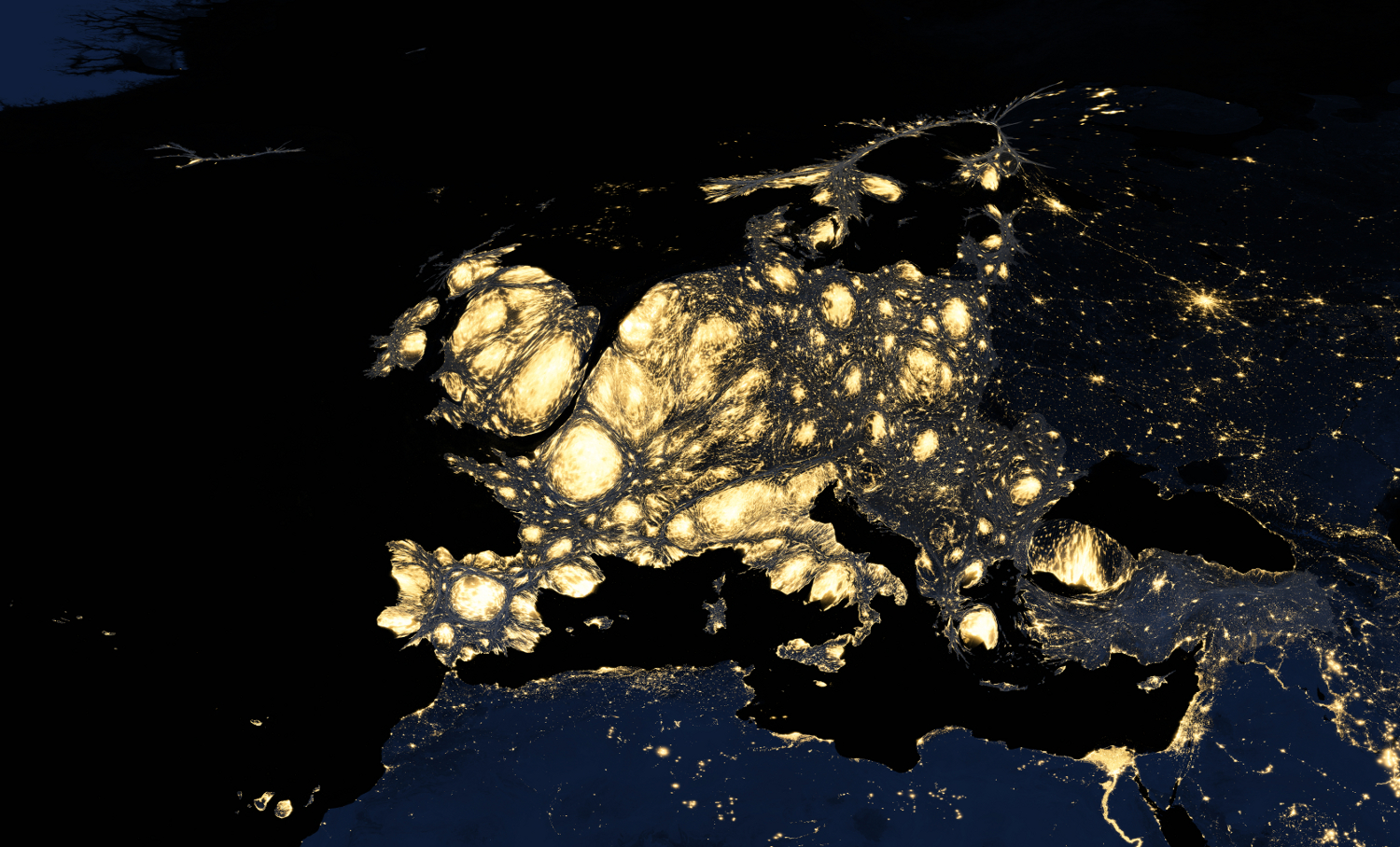 Map of Europe at night based on population Source: The Social Atlas of Europe

In Map 5.047 showing employment in high-technology sectors, this reveals large areas of Portugal, Spain, Greece, Bulgaria and Romania as ghostly plains where contiguity tracks regional development rather than national boundaries.  Southern England, the Stockholm region and areas of Germany appear bloated by comparison.  In Map 3.024 – population born outside the country of residence – Turkey has shrivelled to a flaccid little red balloon while the countries of north western Europe are positively obese.  The Scandinavian countries spread like a canopy in Maps 6.052 (professionals) and 6.053 (technicians and associate professionals) but shrink to twig-like proportions in Map 6.048 (people working in agriculture).  Some maps leave out national boundaries altogether, the better to show regional patterns of identity and development. Map 9.106 – net adjusted disposable income of private households – demonstrates the dominance in spending power in the EU’s ‘golden triangle’ in a way that no table of statistics could.

The work’s key theme of ‘unity in diversity’ is particularly well portrayed in the opening chapter on identity and culture.  This reveals a general adherence to the ‘Copenhagen criteria’ that control state membership of the EU but also profound differences on, for example, the significance of religion in personal life, or the extent of belief in life after death.

Although not a specific aim of the work, The Social Atlas of Europe adds a new dimension to the perennial debate in International Relations on the development and/or decline of the Westphalian state model.  These maps show that national boundaries retain their rationale and integrity in some areas: for example, those relating to politics and policy and, to some extent, to social cohesion.  However, national designations positively obscure our understanding of developments in employment trends and poverty.

The book’s concluding image is an extraordinarily moving light map of Europe by night, sourced from NASA. Of all the images of inequality in this book, this is the most striking. Northern and Western Europe dominate the image with wide pools of glowing light emitted from the densely populated and energy-wasteful cities. These pools shrink and scatter the farther east the eye travels, becoming little more than a gentle speckling through eastern Europe, with the exception of the bright star of Moscow. Neighbouring areas of northern Africa and the Middle East fade into darkness, with just a fringe of light around coastal areas and the Nile delta.  The authors use this image to issue a reminder of the ideological and humanitarian responsibilities inherent in the European cultural identity they have revealed through their work.

This is truly a work of and for the decade.  Content aside, it is a beautiful book whose glossy pages and full-colour visualisations make it a pleasure to dip into time and time again. It should speak to social scientists from all disciplines and at all levels of study, but perhaps particularly to a new generation of students reared on visual information sources.