In Cool Shades: The History and Meaning of Sunglasses, Vanessa Brown explores the evolving concept of ‘cool’ by tracing the history and changing meaning of what she argues to be one of its most emblematic objects: sunglasses. The book shows how coolness and the objects seen to signify it have become central to contemporary constructions of identity, meaning and the self, writes Ed Jones. 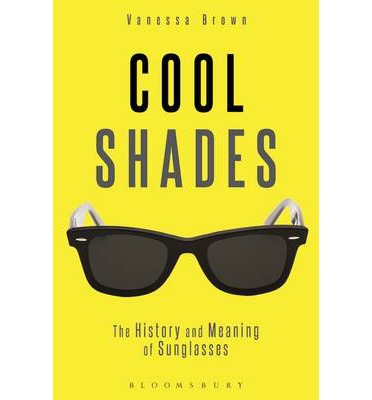 Vanessa Brown’s book addresses the links between the kaleidoscopic and evasive concept of ‘cool’ throughout the twentieth century and the history of sunglasses. It is a valiant attempt to show how sunglasses chime with ideas of detachment, superiority, alterity, meaningless and glamour, but Brown avoids explicitly addressing the true aim of the book, which is to provide an attractive theory of ‘cool’.

Cool Shades: The History and Meaning of Sunglasses is divided into nine sections that suggest sunglasses can be seen as reflections, manifestations or materialisations of diverse narratives of ‘coolness’. The thesis takes its starting point as the turn of the twentieth century, when European cultural elites dealt with alienation in the metropolis by manifesting their detachment from their bustling surroundings. The book swiftly moves to suggest that shading the eyes can be understood as an expression of detachment, strength and composure, which was made fashionable in the context of the culture of mechanised speed in the 1920s. We are then brusquely introduced to sunglasses as a kind of technology used by archetypal cyborgs to establish both their alterity and their humanity in classic Hollywood films. The remaining chapters explore the elastic social meanings of lightness and darkness and their effects on the self; we are introduced to the complex relationship between glamourous shades, sunlight and the paparazzi and the links with jazz, the counter-culture, self-expression and the impervious gaze. The journey ends by presenting the reader with the view – largely drawn from an exploration of Andy Warhol – that ‘coolness’ is a defence against the assault on the self and the debasement of meaning, which are considered by Brown to be two central features of modernity.

The biggest strength of this book is also its primary weakness: sunglasses lie at the margins of every insight. They often serve as a good example through which the general reader can grasp dense topics, but at times they are used to oversimplify. The book offers a seductive introduction to many theories of modernity, featuring the ideas of thinkers such as Georg Simmel and Marshall Berman, but these are sometimes used in a scholastic way. The author is often more interested in understanding how archetypes of modernity can explain the enduring appeal of sunglasses than in addressing their material history, and, more importantly, fails to address the agency of corporations in orchestrating their association with coolness. When Brown draws on adverts to prove her points, she does not measure the success of these campaigns or treat them as individual marketing pitches; instead, she positions them as part of a unified discourse.

The book’s overall coherence gravitates around the poetic exploration of lightness, alienation and darkness, but also rests heavily on the notion of glamour. The idea of the ethic of cool – understood to be the composure and confidence that provide protection from modernity – is peppered throughout the text, but never fully fleshed out. As a framework, there is an alarming lightness to this, perhaps reflective of what the book is trying to address. Yet ultimately its essence is left unheard, which is rather problematic, not least because Brown is content to conclude the work with the line: ‘perhaps when we look back, we’ll see sunglasses as a symptom of – and a solution to – the problems of the twentieth century, the ultimate symbol of the age.’

Brown draws from all corners of the West and its culture as we learn about the dandies’ displays of indifference towards fashion norms in nineteenth-century France and the perception of fighter pilots during the First World War as cool, indifferent and casual due to their ability to withstand the effects of high speeds (presumably by fellow Germans, although this is never stated), but one has to wonder just how much one can extrapolate from such eclecticism.

This is symptomatic of the fact that the work is framed around the coordinates and axis of modernity; some of the issues that Brown traces were in fact mapped out according to frontiers set in the distant lands of the past, something that is never addressed. Yet, overall the fervently modernist attitude of the book provides a refreshing gaze on issues such as meaning and the self.

Despite the book’s flaws, the pursuit of a theory of cool through an exploration of the meanings and uses of sunglasses leads Brown down fascinating rabbit holes that reveal a great deal of insights about modernity. The reader learns how throughout the twentieth century, social detachment became increasingly democratic – for better or worse – as fashion and tourism spread through the West and replicability drove down prices to the benefit of the white-collar middle class. Not only is this a kind of social history; it is also a history of emotions: we are introduced to the various kinds of cool, whether it be displaying a cool demeanour during a heated argument, standing firm in the face of the dilemmas of modernity, mastering speed or protecting one’s identity. As a genealogy of coolness, the book succeeds in showing how being cool is best understood as a performance that can allow one to simulate a sense of identity. As Brown suggests, ‘in a world of threat which strikes at the very coherence of existence, a thing that has the ability to suggest invulnerability, inner composure, and outer toughness has exceptionally wide potential resonance’.

Ed Jones graduated from the LSE in 2013 and holds two MAs in History. He will start his PhD on Early Modern Spanish political thought in 2016, after a year of teaching in China.

Posted In: Art, Lit and Film | Contributions from LSE Alumni | Europe and Neighbourhoods | Health and Wellbeing | History | USA and Canada