In Care Ethics and Political Theory, the editors Daniel Engster and Maurice Hamington present a collection of essays by leading names working in the field of care ethics, exploring such themes as its various practical manifestations and the relationship between care and justice, as well as outlining non-western perspectives. Helen Brown Coverdale welcomes this book for showing the diversity of care ethics approaches and the broad scope of its potential applications. 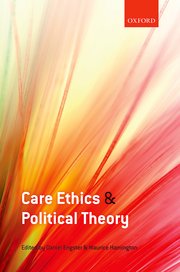 Care Ethics and Political Theory, edited by Daniel Engster and Maurice Hamington, is the latest high-profile edited collection of work by leading names in the care ethics field, including Joan Toronto, Virginia Held, Marilyn Friedman, Nel Noddings and Maureen Saunder-Staudt. It is also the first collection of care ethics work curated by two male authors. This is to be welcomed: to borrow from bell hooks’s famous title on feminism, care is for everybody. The collection will be of particular interest to advanced students and scholars of care ethics, although the editors’ introduction offers a concise, ecumenical overview of care ethics. The book itself is gathered into four sections, grouped around themes of care and justice, applications of care ethics, non-western and subaltern cultures and challenges to dominant paradigms.

The chapters offer cutting-edge thought, developing existing arguments (Held), and taking care ethics into new territories, such as privacy and surveillance (Friedman).  For existing scholars, there will almost certainly be something pertinent to our current work, as well as thought-provoking new perspectives from which we can learn. Of particular interest to those of us raised in the Anglo-American analytic tradition is Part 3, covering non-western perspectives. This section links care ethics with other philosophies, exploring the overlap between care ethics and concept(s) of Ubuntu (Amada Gouws and Mikki van Zyl), and separately with Confucianism (Saunder-Staudt). For the advanced student, this collection demonstrates the diversity of care ethics approaches and the breadth of its possible applications.

Held writes on the relation between care and justice. These perspectives have been contrasted since the beginning of care ethics thought, with justice understood as autonomous individual-focused and generic rule-based, and care being particular, relational and context-responsive. Citing Grace Clement, Held argues that these often juxtaposed perspectives are complementary and necessary for a comprehensive moral theory. Held posits that care and justice are necessary for an adequate moral theory, distinguishing her position from that of Michael Slote, who ‘thinks care as benevolence or compassion can do all of the work needed in a moral theory’ (22). How can we integrate these approaches to produce a workable moral theory? Held proposes that care and justice respectively should take prominence in different domains of society, according to context, to address indeterminacy regarding which set of principles to apply (27). She argues that ‘legal and political institutions should look for moral guidance primarily to moral theories of justice, institutions and persons in the wider domain should look primarily to […] the ethics of care’, particularly since legal and political systems are also relations with distant others, rather than those closest to me (34). Held closes her chapter with a reminder that care ethics is a relatively young ethical approach, and other values need to be included in our thought. 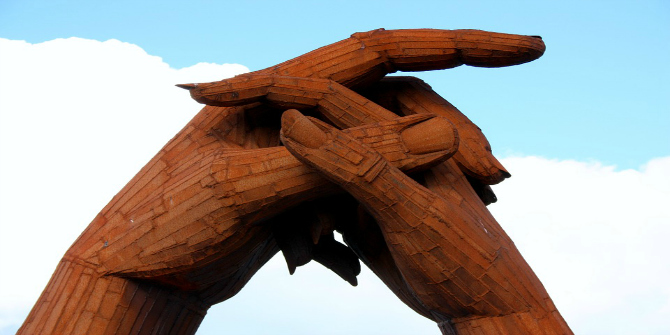 Rita Manning writes about the potential and importance of care ethics in legal theory, although with realistic caution with regards to the conservative nature of law and resistance to such fundamental changes. Manning suggests care might have a role in helping us to think through appropriate standards as a backdrop to constitutional interpretation, interpreting public policy in consequentialist terms and offering analysis of statutory law from the perspective of care ethics, particularly in cases of restorative justice responses to criminality, family and immigration law. She provides two examples of the relevance of care ethics to US case law. Firstly, an appeal to care in Justice Kennedy’s majority opinion in Lawrence v. Texas 2003 (a United States Supreme Court decision, which found Texas laws prohibiting same-sex sexual conduct to be unconstitutional), which prioritised personal relationships over individual interests. Secondly, Manning offers an alternative interpretation of Moore v. Regents of the University of California 1990 (a Supreme Court of California decision concerning ownership of ones’ body parts, after a doctor profited financially from research without a patient’s consent following the consensual removal of tissue). Manning argues that a failure of care could have given the court a valuable perspective, accounting adequately for concerns around the doctor’s interaction with his patient in Moore. Care ethics thus offers an alternative legal lens, capable of providing insights that neither deontology not consequentialist thought can adequately capture.

Hamington innovatively understands care as performative, developing Noddings’ three-part phenomenology of care – awareness, caring performance and acknowledgement  – to include proactive and pre-emptive caring. Listening to the acknowledgement of caring provides a learning opportunity to identify best-fit caring (281-82). This necessarily relational, iterative process of receiving responses from the other, then revising our caring practices, suggests an autopoiesis or caring ‘feedback loop’. Hamington notes that this performative understanding of care does not exclude inductive approaches to the practice offered by Slote, but does highlight the centrality of ‘active and engaged’ (284) caring practices. Caring, Hamington argues, has transformative, integrative implications for both morality on the one hand, and ontology and epistemology on the other. Caring is a chosen act, performed in chosen and unchosen relational contexts in a particular socio-political environment, transcending dualisms of ‘body and mind, self and other, will and social construction, personal and political’ (285). In these conditions, rights and duties talk becomes insufficient. Legalistic responses are positive, symbolic measures, but lack consideration of holistic and interpersonal commitments (286). Hamington posits that moral and political action cannot be separated from ‘considering who we are and what we know’ (288).

Fiona Robinson argues that care ethics is radically reformative, ‘challenging not only the substance of ethics, but also its form’ (304). The above extracts are of particular interest to this reviewer, given my interest in applying care ethics to practices and normative principles of criminal punishment. Whether we view care and justice as compatible (contrast Held and Eichner), whether we view care ethics as applicable to legal problems (Manning, Groenhout) or not (Held), whether we see a key role for empathy (compare Slote, Kittay and Noddings), reciprocity (contrast Kittay and Saunder-Staudt) or mothering practice (see White and Tronto), there will be something to engage and energise everyone within the pages of this thought-provoking volume.

Helen Brown Coverdale earned her PhD in the Law Department at LSE, funded by an AHRC Studentship. In addition to teaching on LSE100, she teaches seminars in political philosophy at King’s College London and offers private tutoring in legal and political theory. Her doctoral research applied the mode of practical moral reasoning found in care ethics to sentencing and punishment practices, to better provide treatment as equals to offenders. Helen's research interests in applied legal and political theory focus on the moral qualities of interactions between the individual and the state, and include the philosophy of punishment, care and relational ethics, relational equality and interactional justice. She holds an MA in Legal &amp; Political Theory (UCL) and a BA specialising in Government (Manchester). Prior to her PhD, she worked in the criminal justice sector, and as a Parliamentary Researcher.

Posted In: Africa and the Middle East | Asia | Contributions from LSE Staff and Students | Law and Human Rights | Philosophy and Religion | Politics | USA and Canada