An edited collection of activist scholarship, Queer/Tongzhi China: New Perspectives on Research, Activism and Media presents a volume of essays that is firmly grounded in activism and theoretically rigorous in its academic reach. The editors, Elisabeth L. Engebretsen and William F. Schroeder, both familiar figures within queer/tongzhi activist communities in Beijing, have contributed to further establishing queer China studies as a field that can never deviate from discussions of precarious activism and state intervention. The colloquial term ‘tongzhi’ has come to signify non-conformative sexual practices and gender expressions. It is commonly used for self-identification and for affiliations with social movements advocating gender and sexual diversity. In constructing a map of China with queer sites dotted across regions along with global information flows, Queer/Tongzhi China amalgamates empirically rich accounts with theoretical underpinnings across the disciplines of anthropology, Chinese studies, cultural studies, film studies, sexuality and gender studies and sociology.

Comprised of twelve chapters, excluding the Introduction, the book may not be separated into sections, but clusters do clearly emerge. The theme of media representation in the form of film festivals and digital video activism is prevalent across four book chapters. Stijn Deklerck and Xiaogang Wei’s meticulous description of the process of producing and sustaining the webcast ‘Queer Comrades’ can best be understood as a case of mainstreaming LGBT issues in China. The criteria for webcast guests to be out and open about their sexuality and the producers’ decision to present positive LGBT representation is deemed necessary for minimal state interference. This might be at odds with the prescription of queerness in queer theory, yet Deklerck and Wei have a dual mission in mind: disturbing heteronormativity in China through ‘Queer Comrades’ and normalising the everyday lives of LGBT persons. However, this first chapter at times reads more like a funding proposal for an overseas funder with descriptions of deliverables and grant justifications.

Three book chapters study the significance of Cui Zi’en and independent queer filmmaking in China. Cui Zi’en is undeniably an influential figure in contemporary Chinese cinema with similar status and intellectual versatility to the US film director John Waters.  Complementing each other, these chapters trace the treacherous development of film exhibitions and independent filmmaking over the past twenty years. Hongwei Bao’s chapter on Cui Zi’en’s 2008 documentary Queer China, ‘Comrade’ China first provides a historical and interdisciplinary overview of LGBT development in relation to the documentary. Employing the cultural practice of ‘telling bitterness’ – conceptualised as an act performed by a marginalised group in resistance to a state regime or a dominant discourse – Bao reads the film not merely as representation, but also as a cultural intervention into queer politics.

Two chapters authored by Popo Fan pay testimony to the imaginative strategies used by community activists to put on queer film festivals in contrast to festivals that are a given in other global cities. Fan’s chapter on the queer film festival tour in China places stress on the instrumental collaboration between gay and lesbian groups despite contentious issues of seniority among organisers and limited scope in the availability of funds. State intervention is also a given. One is reminded of the similar struggles of another queer Asian film festival with Q!Film Festival in Jakarta, Indonesia. The other chapter by Fan can be read as a tribute to the works and activism of Cui Zi’en through a dialogue between the director and his student. 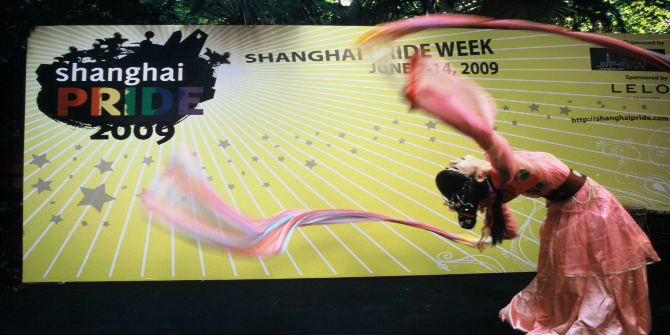 The second emerging theme is autoethnographical journeys informed by both activism and sexuality studies, as in Schroeder and Lucetta Yip Lo Kam’s book chapters. Positioning himself as a US sociocultural anthropologist, Schroeder asserts one’s participation in tongzhi recreational activities as deserving of political recognition in the context of the larger LGBT social movement. Kam’s ethnographic journey is a methodological reflection on being queer in ‘an unfamiliar homeland’. Both Schroeder and Kam’s subject positions in queer China research are exemplary examples of complex self-identifications, which enrich the field of study yet at the same time face the challenges of navigating the slippery definitions of being both an insider and outsider in research.

In my view, the most illuminating theme that emerges out of Queer/Tongzhi China is the ethnographies conducted by Engebretsen, Ana Huang, Wei Wei and Xiaoxing Fu. Drawing on Lisa Rofel’s article on grassroots activism in China, Engebretsen highlights three specific events that have been instrumental to the understanding of ‘mobile, transformative, multilingual’ activist strategies: Stonewall Birthday, Shanghai Pride and Changsha Parade. Engebretsen alerts us to how the political is embedded within seemingly compliant strategies and a lack of confrontation in Chinese queer politics. Huang’s careful reading of transgender subjectivities within Chinese lala subculture – ‘lala’ being a term often used to denote lesbian and bisexual women, and women-loving transgender persons in China – warns us of the overly simplistic and universal claims found in US transgender discourse. Using a notion of surface to offset the limitations of the widely circulated Chinese concept of ‘face’, Huang boldly puts forth the physical body in its entirety as the surface upon which social relations are built.

In addition, Wei Wei charts HIV/AIDS activism in Chengdu through showing an organisation’s tactfulness in building up a positive media presence. Xiaoxing Fu brings readers to understand the transformations of gay social sites in the northern Chinese city of Shenyang through the opening up of China. Global flows of queer politics, capitalism and NGOisation of HIV/AIDS are at work here, situating research and activism at the forefront before an omnipresent looming background of state interference and censorship. A study of different cultural interventions, as in Ling Yang and Yanrui Xu’s exploration of popular boys’ love web literature and Qian Wang’s investigation of queer performances in Chinese pop, can be constituted as another timely topic in the book.

With its geographical vastness, ethnic diversity, population growth and economic potential under an authoritarian regime, China is inevitably an eventful site of enquiry for academic researchers. To put both academic research and activism together, in tandem as partners and compatriots, is the essence of this edited collection. Successful case studies are aptly discussed in conjunction with dialogues between tongzhi subjectivity and Euro-American queer theorisations. Indeed, one may ponder upon the whereabouts of failed experiments situated among the vibrancy of LGBT activism in China. Perhaps failure is still not presentable at this stage, and much is at stake in the overall project of a Queer/Tongzhi China. This volume of insightful writings not only redirects the focus of queer Chinese politics to the realm of social activism and everyday life, but also, as Huang’s chapter cogently puts it, lifts ‘China out of the theoretical ghetto’.

Denise Tse-Shang Tang is Assistant Professor in Sociology at the University of Hong Kong. She is the author of Conditional Spaces: Hong Kong Lesbian Desires and Everyday Life (Hong Kong University Press, 2011). Her articles have published in Sex Education, GLQ: A Journal of Lesbian and Gay Studies and Berliner China-Hefte. Prior to entering academia, Tang worked in community-based organisations in the fields of violence against women, juvenile justice, queer youth, aboriginals, mental health, substance use and HIV/AIDS. In 2004 and 2005, she was the festival director for the Hong Kong Lesbian and Gay Film Festival. Current research interests include queer youth and self-harm, intimacy and mobile phone applications, celebrity culture and civic engagement.