In Slow Cinema, editors Tiago de Luca and Nuno Barradas Jorge explore the emergence of the ‘slow cinema’ as an aesthetic category that animates a particular sense of cinematic time and duration, placing emphasis on introspection, reflection and contemplation. While some of the essays in the collection have been published elsewhere, the volume is especially illuminating when underscoring an integral link between slow cinema, the non-human and ecocinema, writes Sander Hölsgens. 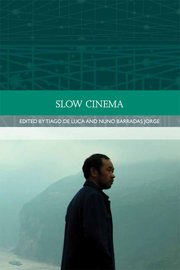 With the collection Slow Cinema, editors Tiago de Luca and Nuno Barradas Jorge hope to argue that a slow cinematic aesthetic is a response to the so-called fierce assault on everyday life. Reanimating a particular sense of time, slow cinema is a catalyst for ‘introspection, reflection and thinking’ (16), whilst recognising and rethinking the enchantment of our world. The emphasis of this edited volume, then, is on the politics of this genre of, or approach to, filmmaking.

Rather surprisingly, the strength of this volume is the reconsideration of works that exist on the margins of slow cinema, including ecological filmmaking and heritage videography. Firstly, these chapters reassess de Luca and Jorge’s stance in a convincing and novel manner. Secondly, and unfortunately, some of the other chapters could be considered reworked versions of previously published essays and books. Although of a high standard, the contributions of Song Hwee Lim, Jacques Rancière and Karl Schoonover are, in some ways, redundant for those already familiar with their work and/or research on slow cinema per se.

In other words, it is the chapters discussing slow cinema in relation to the non-human that stand out. In ‘It’s About Time: Slow Aesthetics in Experimental Ecocinema and Nature Cam Videos’, for example, Stephanie Lam points out that two areas of scholarship, slow cinema and ecocinema, ‘seem to draw near but never meet’ (207). By bringing these areas together, she opens up a space to suggest a slow ecocinema, and to rethink how these kinds of films affect our relation with, and experience of, our environment.

James Benning’s film 13 Lakes (2004), for instance, ‘unfolds entirely through a series of still frames, each lasting ten minutes’ (210). The film’s composition is symmetrical, minimalistic and repetitive. This ensures that ‘the horizon falls more or less in the same position, producing a clear blocking between water and sky’ (210), allowing the audience to perceive and experience the smallest changes. Moreover, because narration and other forms of conventional storytelling are conspicuously absent, Benning encourages us to observe and work through these scenes ourselves. The slowness of 13 Lakes, then, goes beyond the formal level of long takes, and encourages a sensory and sensuous engagement with both the film and the lakes. 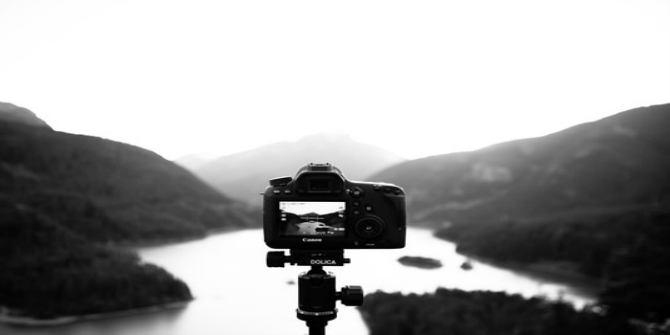 Interestingly,  Lam relates this form of experimental filmmaking to the aesthetics of live streams – and nature cam videos specifically. The US National Park Service, Lam states, provides a 24/7 live feed of the Old Faithful Geyser in Yellowstone National Park, and there are numerous other cameras that are set up in landscapes that could be considered as remote. These live streams ‘fulfil a cultural desire for contact with wild and remote spaces’ (214). And although these videos aren’t appreciated or discussed within the domain of experimental filmmaking or art cinema, there is value in relating them to films like 13 Lakes.

There is, for example, a common interest in minimal movements and the absence of editing. What is more, the long duration is central, and the live streams take it ‘to its most radical extreme’ (215). These formal qualities allow for close observation, a reconsideration of time and duration and ‘intimacy with, and knowledge of, these remote spaces’ (216). Because of their slow aesthetic, these films and live streams present environmental change as a temporal condition. More generally, ecological films contribute to our understanding of slow cinema, and Lam’s chapter is an important and valuable attempt to bring these two areas together.

Justin Remes’s contribution, called ‘The Sleeping Spectator: Non-human Aesthetics in Abbas Kiarostami’s Five: Dedicated to Ozu’, reconsiders cinematic spectatorship in relation to slow cinema. More specifically, he explores what it means to fall asleep when confronted with a slow film via a close analysis of the work of the Iranian filmmaker Kiarostami. Remes suggests that one key characteristic of slow cinema is that an audience isn’t necessarily implied. A film like Kiarostami’s Five (2003), Remes claims, does not need an audience: ‘A spectator is welcome to become absorbed in the film’s evocative visual and sonic textures but he or she is always free to retreat, to lose contact with the film, to drift and fade as landscapes become dreamscapes’ (238).

Instead of taking the audience hostage and provoking them, Kiarostami examines the dynamics between observation and non-observation and between presence and absence – as a slow film would. In the documentary about Five, the filmmaker states that you wouldn’t miss anything if you’d fallen asleep during the screening. Remes interprets this statement in relation to an article by William Brown, for whom the arthouse film is a friend or lover with whom he feels safe. That is to say, for Brown, it is hard to fall asleep during blockbusters for the simple reason that he doesn’t trust them. Films like Five, on the other hand, are more ‘intimate’ and ‘meaningful’, and he therefore exposes his sleeping self: that which he considers to be the most private in his life.

Via this reading, Remes encourages film theorists to take into account the significance of cinematic and spectatorial sleep. Although not explicitly reflecting upon the term slow cinema, this chapter suggests that phenomenological methods, such as those proposed by Vivian Sobchack in The Address of the Eye: A Phenomenology of Film Experience (1992), are crucial in understanding and positioning durational films. With respect to Five, this could lead to a study of not what one consciously experiences, but rather of an indirect and perhaps dream-like acquaintance with the film.

de Luca and Jorge present an insightful and significant set of studies with Slow Cinema. Yet, interestingly, the most relevant and novel chapters discuss films and filmmakers on the margins of slow cinema, and hopefully this volume will lead to more research in this direction.

Posted In: Art, Lit and Film | Environment | Science and Tech