In You Don’t Have to Live Like This, a novel by Benjamin Markovits, disenchanted academic Greg Marnier is given the opportunity to participate in a regeneration project focused on several abandoned neighbourhoods in Detroit. As Marnier finds himself torn between the racial and class tensions that the gentrification experiment exacerbates, Markovits’s novel offers a timely engagement with issues facing the USA post-financial crisis. However, while the book is relatable and highly readable, it fails to probe as deeply into the overarching socioeconomic conditions of the US Rust Belt as Maria Zhivitskaya would have hoped.

Benjamin Markovits recently spoke alongside Michael Caines, Jacqueline Yallop and Dr Robin Archer (LSE) for LSE Lit Fest 2016. The panel ‘We Don’t Have to Live Like This: Experiments in Utopian Living’ discussed utopian experiments in British history and considered whether utopian living is possible today. A podcast of the event is available here.

You Don’t Have to Live Like This. Benjamin Markovits. Faber. 2014. 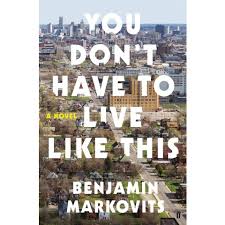 You are trying to help and you haven’t got a clue. In a place like Detroit that makes you one of the bad guys.

In Benjamin Markovits’s novel, You Don’t Have to Live Like This, the protagonist Greg Marnier – or Marny – and his friends are taking part in a socioeconomic gentrification experiment involving building new communities and developing some of Detroit’s poorest areas. Marny graduates from Yale, earns a PhD in literature at Oxford, can’t find a stable job and attends a Yale reunion. He observes: ‘My college friends, with a few exceptions, seemed to be in the same boat. Working harder than they wanted to, making less money, living somewhere they didn’t want to live.’ This factual existential tone underpins the whole novel as Marny moves to Detroit, where he finds himself in the middle of racial and class tensions, with the plot revolving around the conflict between the existing, primarily poor and black Detroit population and the white, middle-class incomers. Marny is white, but is dating a black woman, and is reluctant to take strong sides in the racial tensions that arise in the book. While this indecisiveness could be seen as a disadvantage, I found it very believable – it felt like a personal intimate account from someone who sees both positions too closely to be able to judge.

Detroit is a suitable setting for the book because it is, according to Marny, at the centre of so much that the USA is worrying about these days: ‘the death of the middle class and the rise of social inequality, the collapse of the real estate market and the decline of manufacturing, the failure of the American labour movement and the entrenchment’. The book is unmistakably American in theme – ‘around lunchtime [Marny] stopped in Walmart and bought a gun’ – and it is certainly timely, featuring post-global financial crisis economic disparity as well as race and class tensions. Yet, the story itself is quite slow and predictable, and is also heavily racially charged, with a black man raping a white woman and the poor black population looting and rioting due to their dissatisfaction with the overarching economic inequality. The descriptions of peripheral characters are unnecessarily detailed and break down the flow of the story – this wouldn’t have been a problem if the novel was written beautifully or had deep insights into human nature, but those aspects weren’t quite there. The book could be about a third of its current length and still convey the same plot and mood. 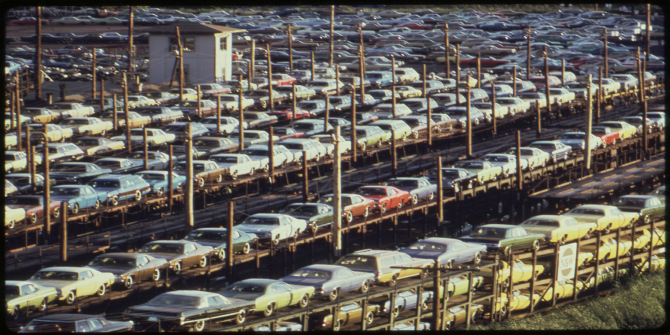 The book is very depressing and uncomfortable, but mostly due to what is left to the imagination rather than to what is said: for instance, when one of the female characters is raped, Marny’s description is distant, factual and cold. I interpreted this as an effective literary device to demonstrate an uninvolved narrator, but if one was less kind, it might also be possible to say that the book tried and failed at making the reader feel as uncomfortable as when reading J. M. Coetzee’s Disgrace or Elena Ferrante’s Days of Abandonment. In terms of the plot, the two main violent incidents seem to be predictable plot devices, and their resolutions are unremarkable. Marny begins by stating that he has never been much good at telling stories – indeed, the narrative is a bit patchy both in terms of the tone of descriptions and storyline continuity. The conversational style makes it very relatable and readable, but it is a casual page-turner rather than an insightful thought-provoking piece.

Structurally, the book consists of thirty-nine bite-sized ten-page chapters. This format contributes to making it an easy read – the novel is definitely a convenient book for commuting. Yet, the depth is very clearly missing in this narrative – the novel had a lot of potential to bring up the lived experience of socioeconomic struggles or to portray the intricacies of attempting to implement change. It could also have shown the personal development of someone struggling with finding purpose in life, while growing through the experience of attempting to build a new community. It didn’t quite do any of those things. That makes the narrator seem quite immune to all the developments – and therefore significantly weakens any compassion we might otherwise feel for him.

The story fits well with the theme of the LSE Literary Festival 2016, ‘Utopia’, because it is about a group of people building a new community that is intended to bring together idealists and libertarians. According to a definition from the Oxford English Dictionary, utopia is a ‘plan for or vision of an ideal society, place, or state of existence, especially one that is impossible to realize; a fantasy, a dream’. Unsurprisingly, the utopian ideal in the book is too remote and unattainable, remaining barely mentioned in the background while mundane life goes on. Yet, I liked that the novel was not too idealistic, and the fact that the narrator ended up in Detroit by accident rather than because of a great desire to improve the world was very believable. Keeping in mind that the narrator is an academic, I was nonetheless disappointed not to see more evidence of intellectual curiosity and to receive a deeper overview of the socioeconomic and historic developments of the US Rust Belt.

Fitting with the neither-here-nor-there narrative style, the conclusion to the novel is suitably open: ‘Maybe my brother is right, you need to build fences. You need a wife, you need kids, you need private school. Okay, so you worry about money. Worrying about money is what you pay for. It stops you from worrying about everything else.’ Overall, I found the raw and direct narrative of You Don’t Have to Live Like This compelling, but the novel could have been improved if it had more depth. The book is depressing and engaging and is a worthwhile exploration into very contemporary US issues, but it is unlikely to leave you feeling enriched or developed.

Maria Zhivitskaya completed a PhD in Risk Management from the LSE Accounting Department in 2015 and is now working for Goldman Sachs.