With inequality one of the pressing concerns of the contemporary moment, a new edition of Fractured Identities: Changing Patterns of Inequality seeks to contextualise its analyses amidst processes of globalisation, the aftermath of the financial crisis and the widespread implementation of austerity policies. Harriet Bradley uses an intersectional framework to examine inequalities relating to class, gender, ethnicity and age, and also presents a new chapter attending to disability, sexuality and religion. This text continues to inspire and educate and remains a valuable undergraduate social science resource, writes Andreea Ciurea. The social construction of the ‘other’ through differences in class, gender, ethnicity, religion, disability, body size or sexuality is not new. Yet, in the current globalised, fast-paced and neoliberal context of the western world, we are confronted with ever-changing nuances of the ‘other’ that fuel, in Harriet Bradley’s words, processes of social fracturing and polarisation.

This new edition of Bradley’s popular text, Fractured Identities: Changing Patterns of Inequality, examines current patterns of inequality in the context of increasing globalisation, a world recession and neoliberal policies of austerity. Against the backdrop of intersectionality set out in the first edition, we are introduced to various well-established theories and concepts outlining the ways in which varying forms of social division, such as those of class, gender, ethnicity and age, interact with each other to create distinct patterns of disadvantage and difference. Moreover, the second edition of Bradley’s text offers an entirely new chapter focused on social divisions relating to sexual orientation, religion and disability.

Bradley’s text is easy to follow, benefiting from clear arguments that are both innovative and engaging, making it a good student read. Each of the chapters has a clear outline and can be read as a self-contained unit. For instance, Chapter Two deals with the term ‘social location’, focusing on class and age as different means of placing individuals within the power structures of society. The book explores further changing social categories of class, ‘race’/ethnicity, gender and age as well as the lived relationships that individuals experience as part of the social context these categories attempt to encompass. Chapter Three deals with the ways in which societies have been categorised, examining the operation of particular social institutions. This chapter outlines and briefly discusses notions of industrialism, capitalism, modernity, post-industrialism, postmodernity, globalisation and neoliberalism. The core of this second edition of Fractured Identities is outlined in Chapters Four to Seven, each of which is accessible to undergraduate students. Class, gender, ‘race’/ethnicity and age take centre stage; all are analysed using the same format, dealing first with classic approaches before a discussion of newer conceptualisations. The complex nature of inequalities is also examined within these chapters along with an exploration of the intersections with other dynamics of inequality.

Chapter Eight briefly examines three other forms of inequality: namely, those relating to disability, sexual orientation and religion, which in recent times have seen the development of active and politicised identities. However, these types of social difference do not benefit from the same pattern of analysis as the ones featured in Chapters Four to Seven. This is mainly because Bradley does not explore intersectionality systematically in this chapter due to a lack of space and the newer development of research into these social divisions. Yet, this chapter does continue the social polarisation and fragmentation theme, which is reintroduced in the final chapter.

The concluding chapter calls for change and the development of a new sociological approach rooted in classical thought and enriched by postmodern theories able to guide our society towards a better future. Hence, in order to better understand and potentially suppress social inequalities, Bradley suggests three possible approaches. The first is the acceptance of Jean-François Lyotard’s dictum, where grand narratives are replaced by local narratives and where understanding context becomes crucial. The second relates to the acceptance of local divisions within the globalised capital framework. The third advocates for the re-engagement of modernist theories, resulting in an intersectional approach that encompasses context and the acceptance of local narratives.

The book touches on and examines key notes of the current globalised socio-economic and political context, such as the ‘War on Terror’, changing demographics and European migration. Bradley uses a comprehensible and systematic account of classic sociological theories and approaches in order to explore how different aspects of social differentiation have been generated and continue to persist. For example, she examines the sociological approaches of Max Weber and Georg Simmel to action and agency as well as Karl Marx and Emile Durkheim’s work on structure and system, linking it to Anthony Giddens’s theory of ‘structuration’ (1976). Bradley also examines postmodern views such as the concept of habitus, which, according to Pierre Bourdieu (1990), refers to a socially and culturally conditioned set of durable dispositions for certain kinds of social action. These sets of propensities are internalised by individuals in the course of their life experiences and in relation to their social positions. Bradley explains how postmodern approaches evolved to a certain extent as a challenge to Marxist structuralism, offering, in the words of David Harvey (1989), ‘total acceptance’.

It seems fascinating that the social divisions and inequalities mentioned above have been, and continue to be, part of our society, communities and families. It is even more fascinating to think that we as individuals continue to ‘fabricate’ the need for these social divisions as part of the embedded social patterns governing our communal institutions. This is a need often related to the construction of the ‘other’, which generally represents a lesser subject, and so builds the crucial ‘self-esteem’ dose that sets oneself apart from the ‘other’. Although this analogy might seem dubious, arising from a third-rate psychology class, Bradley misses a very important point when examining social divisions in this book: namely, our human nature to create and perpetuate these social divisions that can indeed be curbed, but never defeated.

However, according to Will Miller, human nature is not the problem, but rather a consequence of ever-shifting power relations. Hence, while Bradley’s text offers the means to understand and potentially reduce social differences, it could also benefit from addressing the underlying structure of power that fuels these divisions:

Given social opportunities and the institutional structures to meet their needs by means that hurt no one else, historically, most people have chosen non-selfish alternatives […] Our current problems are rooted in the forced competition required by the structure of market society, with its carefully crafted artificial scarcities of opportunity […] A ruling minority depends on a divided majority for its security and continued privilege.[…] the desire for coercive power over others is often part of a desperate strategy for enhancing one’s self-esteem […] In Henry Kissinger’s own words, ‘power is the ultimate aphrodisiac’. (Miller, 1999)

Bradley’s well-known text inspires and educates, representing a valuable undergraduate social science resource. Although it tries to cover most of the key types of social difference, it manages to keep its reader engaged by offering numerous examples and connections to local, current and past social contexts.

Andreea Ciurea is a PhD candidate in the Department of Arts, Design and Social Sciences at Northumbria University. Her research explores the bidirectional remittance flows of Romanian migrant care workers and students in the UK.

Posted In: Economics | Gender and Sexuality | Philosophy and Religion | Sociology/Anthropology 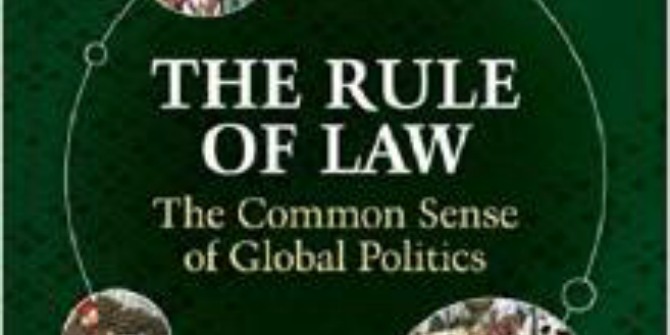