In Citizens in Europe: Essays on Democracy, Constitutionalism and European Integration, Claus Offe and Ulrich K. Preuss offer a collection of essays published since 1983 that consider key issues that must be addressed by European citizens and institutions if recent turmoil is to be overcome and greater integration achieved. This volume is recommended to those looking for institutional solutions to what has been referred to as the ‘European crisis’, writes Simeon Mitropolitski. 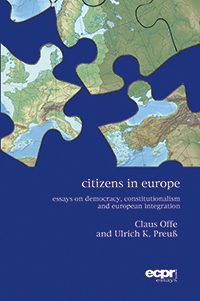 In Citizens in Europe: Essays on Democracy, Constitutionalism and European Integration, two prominent German political researchers, Claus Offe and Ulrich K. Preuss, offer a collection of essays dealing with contemporary European issues, the place that European citizens play in building up-to-date political institutions and the ways to solve some of the problems within what journalists, policymakers and academics refer to as the current ‘Euro crisis’. This is not the first time these authors have worked together: English readers will likely be familiar with their seminal book on institutional design in post-communist societies, published almost twenty years ago.

In Citizens in Europe, Offe and Preuss present 22 essays published since 1983, written by one or by both of them, either in the form of peer-reviewed articles or book chapters. The main goal of this collection is to use the normative and analytical arguments presented in their earlier work to throw light on the issues that the European Union and its citizens must come to terms with if the current turbulences in the European integration process are to be endured (1). Without presenting specific policy recommendations, the authors suggest keeping the old or creating new institutional mechanisms that enforce citizens’ political participation and turn the EU into a supranational welfare state.

The book targets both a general and academic public – not necessarily current university scholars or students but readers interested in recent European developments but with minimum knowledge about many issues. The writing style rarely uses specific social scientific terms. Nevertheless, it is not a collection of journalist writings, even if the subject matter can look quite similar.

For the purpose of this review, I focus on the four most recent essays, published since the beginning of the current Euro crisis. Two were written by Offe and two by Preuss; two were first published as peer-reviewed articles and the others as book chapters. This narrowing down is necessary to provide enough material for further critical assessment, yet these four chapters are not representative as far as the discussed topics are concerned. They are, however, representative regarding the model of demonstration that typically leads the authors from the research question to different institutional solutions. 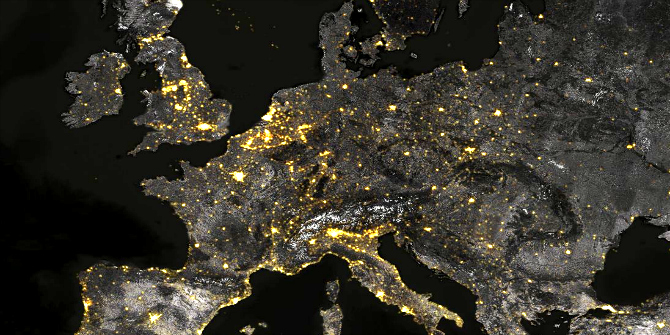 Image Credit: Lights of the Night, Europe (Mapbox CC BY 2.0)

In Chapter Four, ‘Crisis and Innovation of Liberal Democracy: Can Deliberation be Institutionalised?’, Offe discusses institutional designs for democratic innovation to improve the functioning of liberal democracies. Two groups of innovation are currently considered as remedies for some of the observed deficiencies of democracy. The first deals with strengthening the voice of citizens and the expression of their will, such as through changes to the electoral system, making voting mandatory, allowing for direct democratic legislation, increasing the autonomy of local authorities, introducing gender quotas, etc. The second group, which Offe implicitly recommends, deals with improving will-formation through deliberations. Deliberations make citizens better informed on the issues at hand, increase the scope of citizens that are informed and have the potential to widen the social inclusion of participants.

In Chapter Eleven, ‘Constitutionalism in Fragmented Societies: The Integrative Function of Constitutions’, Preuss discusses how to reform corrupt political structures that pervade society, further political apathy and cynicism and encourage the renaissance of nationalist, xenophobic and anti-Semitic tendencies. The solution is to include within constitutional texts several vague principles open to very diverse, even opposing, interpretations. The idea is that such vagueness will invite political actors to fight in the field of constitutional interpretation and will therefore guide antagonists away from the brink of civil war (223).

In Chapter Sixteen, ‘Revisiting the Rationale Behind the European Union’, Preuss considers whether the peoples of the member states of the EU have believed, and still believe, in the dominant narrative about the Union: a narrative that sees ever-closer Union as an embodiment of lasting peace and economic prosperity. Has this story undergone changes in the course of the 60 years since the EU’s foundation? The author concludes that it is the end of the political vision of the European Union as a polity in which many peoples blend into one body whose coercive character requires the homogeneity of the rulers and the ruled. Instead, he offers a new vision in which the idea of solidarity is grounded in the mutual recognition of otherness and the development of modes of cooperation, which requires a reduction of social inequality among Union citizens.

Finally, in Chapter Twenty-Three, ‘Europe Entrapped: Does the EU Have the Political Capacity to Overcome its Current Crisis?’, Offe discusses what should and can be done to overcome the crisis with the common European currency. The solutions, as expected, require reforms within institutional settings. Among them, the author signs up to the idea of an EU-wide tax harmonisation applying to direct taxes; to an increase of taxes on high income and wealth; and to proposals for creating an EU-wide system of unemployment insurance and social assistance, which will have as a side effect a boost to mass identification with Europe as a political entity. Politically, Offe suggests strengthening the European Parliament and transforming the Commission into something like a parliament government (487).

Citizens in Europe is a good example of both the strengths and limitations of the institutional design approach. The essays are not formal discussions detached from empirical foundation; instead, suggested institutional solutions are grounded in comparative political experience. In other words, these solutions are expected to work as planned because they have worked in similar situations elsewhere. The possible critique of these solutions is also rather typical and comes from comparative politics too. For example, empowering citizens through deliberations (Chapter Four) may have unexpected consequences in also empowering charismatic leaders with anti-liberal and anti-democratic political agendas. Shifting the dominant discourse of the EU from liberal ideas to ideas of solidarity (Chapter Sixteen) may unexpectedly backlash; instead of taming the market beast, the result may be an impoverished, greying Europe, and  the same criticism could follow each and any of the suggested economic and financial measures presented in Chapter Twenty-Three. Yet, these theoretical limitations notwithstanding, Citizens in Europe is a very useful read for people curious to find institutional ways for solving the current European crisis.