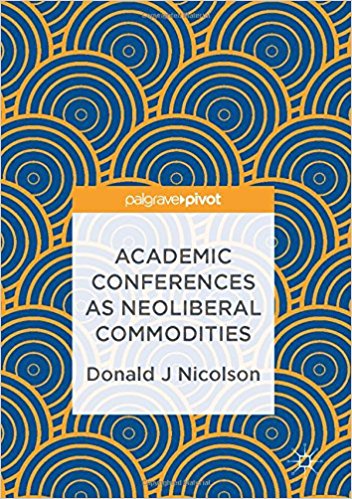 If such ponderings resonate with you, then you have probably found yourself like Donald J. Nicolson, speculating on the value and purpose of attending an academic conference. Nicolson’s book Academic Conferences as Neoliberal Commodities provides an exploratory study into conferences in the social sciences, looking explicitly at the link between conferences and the neoliberalism of academia itself. In this strikingly original work, the author draws upon an assortment of methods, including an analysis of five conference case studies, notes made at conferences he personally attended, conference records, abstract booklets and interviews with people from a range of backgrounds. The novel layout of the book starts each chapter as though a conference presentation, with an abstract and keywords. Opening with a ‘Welcome’, the reader moves through several ‘parallel’ sessions before the ‘Closing Keynote’. Nicolson, a freelance writer with a background in academic research, writes independently of any university or funding body and employs a lucid writing style that makes for an accessible and enjoyable read.

After reflecting upon the difficulties of defining ‘neoliberal’, he argues that, ultimately, the neoliberalisation of the university has resulted in changes whereby in place of the traditional professional culture of open intellectual enquiry and debate, there is now an institutional stress on measurable performance. By seeing knowledge as a product that can arise from a conference, Nicolson considers such events as having a role in the ‘knowledge enterprise’ industry that by promoting a method, data set or research cause as a commodity, becomes the product and marketplace itself. The academic culture of conferences themselves may vary: a point noted by Les Back when he characterises Australian ones as ‘vicious and boozy’, US conferences as ‘status conscious and networking-obsessed’ and British equivalents as ‘polite and consensual’. While recognising that reasons for attending conferences are also variable, the book nonetheless demonstrates how the overarching function of the conference lies in its premise of promoting intellectual communication. 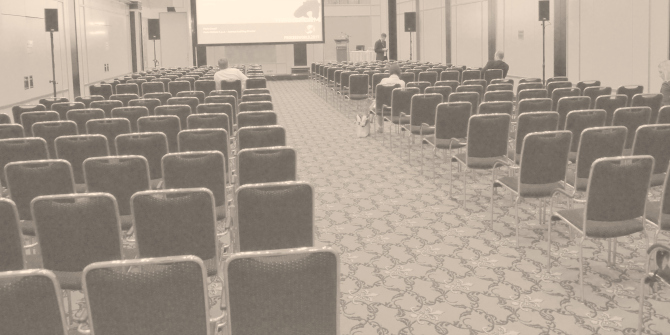 Acknowledging that academia plays out differently across contexts, the book alludes to what conferences of our increasingly neoliberal future may look like. Nicolson makes brief references to the rise of ‘5 minute presentations’ and ‘posters’, and relays the potential role of Twitter as well as variants on the academic conference, such as TED Talks. While his own study is not extensive, this raises the need for further exploration of the different directions in which academic conferences could be heading and the ways in which technology is changing the traditional structure of the conference.

Appreciating that ‘the Helsinki Conference would not have been the same had it been conducted as a group email’ (17), the author also considers the constraints of conference attendance where travel plays a pertinent role. He raises concerns about the environmental impact of carbon emissions from airplanes and money wasted on conferences. While academics from universities in the northern hemisphere may enjoy generous travel budgets and mobility, this is generally not the case for researchers coming from the Global South. Nicolson reflects upon how last year, at the biannual conference of the African Studies Association of the United Kingdom, an unconfirmed number of delegates were unable to attend due to visa refusals. Where a conference is hosted inevitably influences who can attend, and as such has implications for knowledge sharing and development: a pressing concern in a world of increasing walls. Nicolson importantly points out that while conferences are often labelled ‘international’ and ‘global’, the reality is that they often have a homogenising effect given that the intellectual environment within which they are held largely celebrates Anglo-American, English-speaking academic culture.

The book notes that a key reason for people to go to conferences is to engage with colleagues in their field and establish networks. As such, conferences can help prevent the isolation often associated with academia. In reality, however, conferences can themselves be potentially alienating, and such socialising may not come naturally to everyone. This is particularly the case given the ambiguous nature of ‘professional socialisation’, whereby one partakes in the awkward juggling act of grasping at something intelligent to say, while at the same time not too intelligent, lest you come across as if you aren’t a well-rounded person who has no interests beyond the article that is currently keeping you up at night. This socialisation may be traditionally performed over the conference dinner, a seemingly cordial opportunity for delegates to make new acquaintances or catch up with colleagues. Some of Nicolson’s respondents reflected upon how the ‘real work’ at a conference happens at the bar (53). While this point is not merely about enjoying an alcoholic beverage but rather the significance of face-to-face interaction, it again reflects the Eurocentric manner by which professional socialisation often takes place within academia. This is a point that Nicolson unfortunately does not reflect upon, but which might have bearing for scholars who do not drink alcohol for personal reasons or due to religious practices. Another limitation of the book, which the author duly acknowledges, is that the research reported does not provide a representative sample of conferences or interviewees. 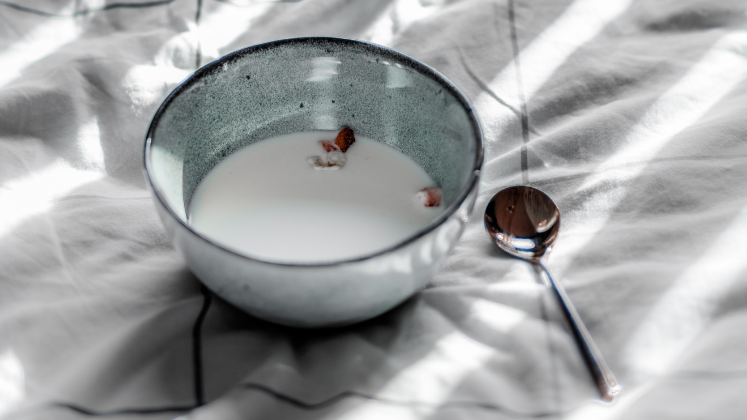