In Following Searle on Twitter: How Words Create Digital Institutions, Adam Hodgkin draws upon the work of John Searle to explore Twitter as a distinctive social institution constituted through speech acts. As an academic who utilises Twitter, Christopher May welcomes this book for deepening understanding of the social media platform and for encouraging reflection on one’s own practice. 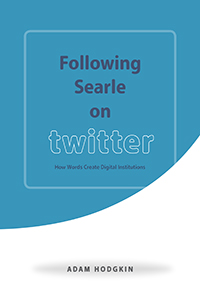 This book immediately piqued my interest as I have written extensively on the social construction of institutions (albeit only recently coming to appreciate John Searle’s perspective), and I have a lively Twitter account (@chrismayLU, since you ask), to which I dedicate a fair amount of time to posting and curating. Thus, I was well disposed towards Following Searle on Twitter: How Words Create Digital Institutions?, and I am happy to report that it does not disappoint.

If you think the link between Searle and Twitter is a classic bit of modern academic sophistry, Adam Hodgkin starts his book with a detailed analysis of the seven tweets Searle himself sent during a ten-month period around 2010. While Hodgkin argues that Searle was clearly (and rightly) interested in Twitter, he was by no means committed to it, but most importantly he did not follow Noam Chomsky in dismissing it for its trivialisation of communication. Like Searle, Hodgkin wants to take Twitter seriously, regarding it as an interesting new social institution, and here utilises Searle’s ideas to understand how this conclusion can be substantiated contra critics sharing Chomsky’s view of its negative social effects.

Hodgkin’s book is based on two key premises: firstly, that Twitter is a particularly contemporary form of social institution, built through the deployment of (digital) language(s) and existing (for the most part) virtually rather than physically; and secondly, that utilising Searle’s notion of speech acts, tweets can be usefully regarded as Status Function Declarations (SFDs) and, as such, are the building blocks of this social institution. 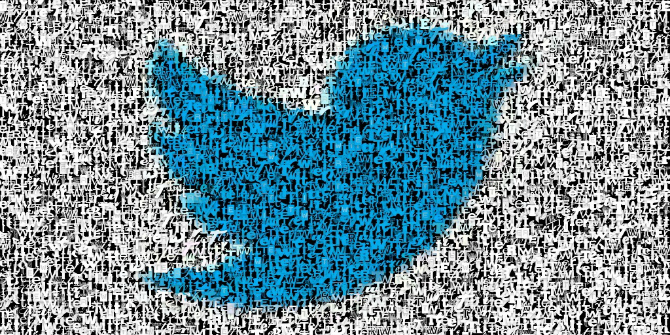 Most readers will be familiar with the idea of a social institution, but it might be helpful to say something brief about the character, purpose and role of SFDs. For Searle, the SFD qua spoken/acted declaration is the manner in which humans create and maintain our institutional reality in a continuing and recursive manner: this is to say, SFDs can act on prior declarations, reinforcing them, shifting or even (re)formulating them. What Searle is trying to get at is the common underlying function that brings a multi-faceted and variable world of sociality into being for us. While speech acts are a product of human intention, SFDs, through their repetition prompting institutionalisation, move beyond the intention of the individual speech act and become structural social elements. As Hodgkin notes, for Searle, ‘our collective enterprises are driven by SFDs, and our social arrangements can be mapped by the SFDs of which they are composed’ (21). As Searle himself regards the SFD as an empirically testable proposition, this is exactly what Hodgkin sets out to do in the rest of the book.

Following Searle on Twitter is a journey into Twitter starting with the process of joining the social media site and then choosing a name. In a detailed discussion, Hodgkin defends admirably the claim that by the time we have initiated out Twitter account, we have undertaken four SFDs. We have firstly sought to join Twitter, our first SFD: commencing the act of joining in itself reinforces the institutional solidity of Twitter. We then perform a couple of further highly individualised SFDs in revealing our own details to the site and deciding on a password: again, each reinforcing the social medium’s institutional structure. Lastly, we choose our Twitter username.

These SFDs may seem highly constrained by the technology underlying Twitter, but Hodgkin’s point is that our collective activity in fulfilling these ‘requests’, by which we open an exchange of rights and responsibilities with Twitter, is a direct example of the sorts of fundamental institution-building mechanisms that Searle has identified: without people undertaking these SFDs, there would be no Twitter (or, in parallel, any other social media institution). This leads to a fascinating discussion of the institutional production effects of following, unfollowing, listing and blocking; in this sense, as Hodgkin points out, the institution is in some ways self (re)producing. Although it appears the book was written ahead of Twitter’s shift from ‘favourites’ to ‘liking’, nevertheless the coherence of Hodgkin’s deployment of Searle’s insights requires the reader to do little extra work to easily slot ‘likes’ in as a further example of institution-enhancing SFDs.

One of the key aspects to tweeting, as any user knows, is the retweet, and here Hodgkin, in perhaps his only slight analytical misstep, is a little too quick to move on. Certainly, he recognises the potential for retweets to be ‘deceptive, ironic or playful’ (84) – to which one might add that retweeting with additional commentary, at least in academic networks, has become the default mode of engagement with the Twittersphere. While he offers an outline of how the retweet can be seen as a form of SFD, here I wanted to see the depth of coverage that is evident elsewhere; but equally, the strength of Hodgkin’s depiction of a Searlian approach is that it is easy for the reader to see how such an analysis of retweeting would proceed.

Otherwise, Hodgkin shows a sure command of his subject, matching a knowledge of the technical history of Twitter, refracted through Searle’s conceptual lens, and discussing a range of notable Twitter moments, from the infamous furore around a tweeted ‘joke’ about Robin Hood Airport to the increasing use of Twitter to comment on unfolding events. As he notes, this is a ‘bottom-up’ theorisation of Twitter and, as such, is not merely applicable to this one particular social media institution. Thus, in the final chapters, Hodgkin widens the analysis to ask whether other institutions built on digital language are amenable to a similar analysis. Here, perhaps the key point is that these institutions are built from SFDs that require very little (or small) investment, but perhaps more importantly have a zero marginal cost.

There’s plenty more to Hodgkin’s excellent book, but for academics using Twitter, its main value is an analysis that will deepen understanding of this ubiquitous tool/pastime and will offer real insight into one’s own practice. As an invitation to be self-reflexive about your own tweeting, you could not ask for a better guide than Hodgkin. I really enjoyed this book, and fellow tweeting social scientists, I know you will too.

Posted In: Media Studies | Philosophy and Religion | Science and Tech 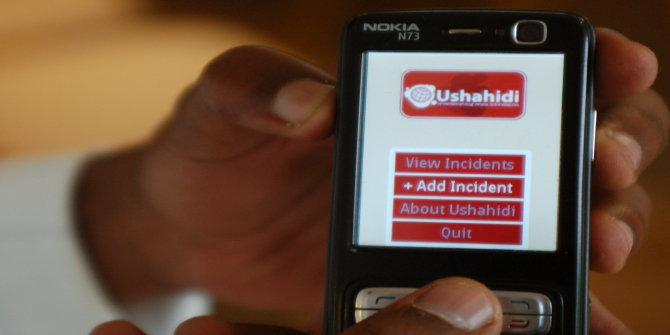