In the final decades of the twentieth century, Teesside has experienced precipitous industrial decline, mass unemployment and environmental decay. In Industrial Teesside, Lives and Legacies: A Post-Industrial Geography, author Jonathan Warren focuses on how the legacies of an industrial past continue to shape local identity and constrain the present and future of the region. This melancholy book is written with deep knowledge of, and affinity for, its subject, writes John Tomaney, and succeeds in giving voice to the provincial without finding easy answers to Teessides’s predicament.

This review was originally published in Regional Studies and is reposted on the LSE RB blog with the kind permission of the journal editors. 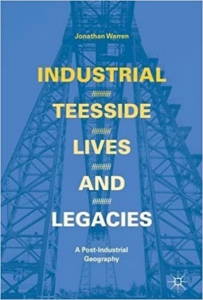 Where alchemists were born below Cleveland’s hills.

A giant blue dragonfly across the Tees reminds us every night.

We built the world, every metropolis came from Ironopolis.

Teesside is a singular place. In 1801, Middlesbrough, its principal settlement on the River Tees, had a population of 25 souls. By 1901, 90,000 people lived there, and it lay at the heart of an industrial conurbation. In 1862, William Gladstone visited Middlesbrough and claimed, ‘This remarkable place, the youngest child of England’s enterprise, is an infant, but if an infant, an infant Hercules.’ Nineteenth-century urban growth was driven by the iron, steel and shipbuilding industries, connected to the adjacent Durham coalfield by the world’s first public steam railway. Middlesbrough was ‘Ironopolis’ – a knowing reference to Manchester’s status as ‘Cottonopolis’, the first city of the industrial revolution. Its Ironmasters presided over the construction of the quintessential Victorian town, with its Gothic Town Hall and grid street pattern. New settlements sprang up along the Tees and the market town of Stockton was transformed into an industrial centre. A second wave of growth occurred before and immediately after the Second World War when ICI established the petrochemical industry, first in Billingham, and later at Wilton, located on the riparian flatlands of the Tees estuary. Steelmaking had a second wind with the opening of the Redcar blast furnace in 1979. Teesside’s population continued to grow, attracting, among others, those leaving the former mining villages of County Durham. As late as the 1980s, with petrochemicals performing well, the Teesside economy looked relatively strong.

In Industrial Teesside, Lives and Legacies: A Post-Industrial Geography, Jonathan Warren is concerned with the second act in Teesside’s drama. In the final decades of the twentieth century, Teesside experienced precipitous industrial decline, mass unemployment and environmental decay. As Warren notes, industry has not disappeared from Teesside, even if employment has shrunk, and the skyline of the region remains dominated by it. But new forms of employment tend to be low-wage, precarious and lacking occupational and social progression. Teesside has become synonymous with social deprivation. The book concerns how the legacies of an industrial past continue to shape local identity and constrain the present and future. 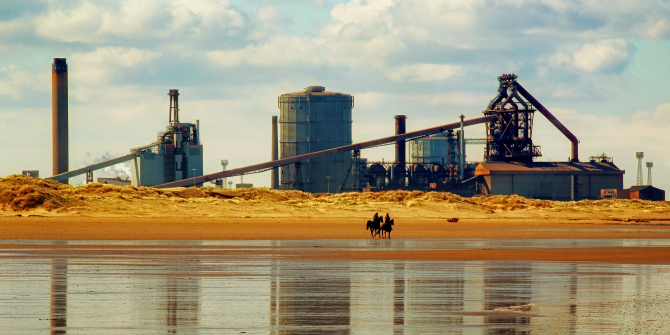 Warren begins with a brief treatment of theories of deindustrialisation, post-industrial society and globalisation but these provide only a loose backdrop to what follows rather than a framework that guides the study, and they are not returned to directly in the conclusion. The core contribution of the book concerns Warren’s attempt to construct a ‘biography of place’, in which social change is seen as rooted in distinctive communities. On the whole, he succeeds. Places here are not the administrative categories of political scientists or the compositional artefacts of economists but the context within which real lives are lived, narrated and understood. Grasping their meaning requires a sociological imagination.

Teesside’s biography is constructed through interviews and focus groups with different demographics. Photo elicitation is used to stimulate respondents’ assessments of change. This method produces a rich account of social change in which the voices of Teessiders are centre stage. What emerges is a nuanced account of local identity which is simultaneously nostalgic for the past and realistic about its limits. A pervasive sense of loss emerges, primarily for a world that provided secure, plentiful and stable employment for all and a sense of belonging. These themes are elaborated in more in-depth interviews, which provide a compelling account of industrial life.

Dominated by large, paternalistic employers that provided housing and social facilities, Teesside was marked by cooperative industrial relations and a broadly shared sense of purpose that underpinned rising living standards. A feature of the late industrialisation of Teesside was the comparatively significant employment opportunities it offered to women. Women’s voices figure prominently in the book and the sense of a better yesterday is not restricted to men. Scepticism about regeneration efforts is commonplace and centrally imposed visions of the future are looked on askance. Exhortations, aimed at places like Teesside, to rid themselves of the past and embrace the brave new world of indeterminate change are revealed as futile, for this requires people to deny their identity, which they are unwilling to do.

A liminal place located between the industrial North East and rural North Yorkshire, its position in the wider North is uncertain. Local and central government is seen as failing, but barely twenty percent of the electorate troubled themselves to vote for a new Mayor for the ‘Tees Valley’, a jurisdiction which incorporates Darlington, not traditionally part of Teesside. This marketing artifice is largely ignored in Warren’s study.

This is a book written with deep knowledge of, and affinity for, its subject. It adds to the small number of valuable monographs on modern Teesside that includes Lady Bell’s At the Works (1907), Ruth Glass’s The Social Background of a Plan (1948), Asa Briggs’s erudite essay on Middlesbrough in his ground-breaking Victorian Cities (1963), Huw Beynon et al’s A Place Called Teesside (1994) and Minoru Yasumoto’s meticulous The Rise of a Victorian Ironopolis (2011). The many typos are a distraction; the most egregious example is the misspelling of Middlesbrough on page 55. The link between theory and case study could be clearer. But the book powerfully demonstrates the importance of regional identity in framing the experience of social change. Teesside’s Brexit vote is interpreted by voices here as a protest against neglect and condescension, directed more at London than Brussels.

Writing in 2005, in Granta 90, Jeremy Seabrook presciently observed that:

If the pain of passing of provincial life has been denied, it is because everything that succeeded it has been tendentiously and insistently portrayed not as a mixture of the gains and losses that accompany all social change, but as irresistible progress towards a beckoning future over which dispute is not possible (‘The End of the Provinces’).

This melancholy book gives voice to the provincial, even if it does not provide easy answers to the question of what is to be done.