In Reclaiming the Discarded: Life and Labor on Rio’s Garbage Dump, Kathleen M. Millar offers a new ethnographic study of Jardim Gramacho, the biggest waste dump in Latin America until its closure in 2012. The impassioned analysis that arises out of Millar’s immersion in the lives and labour of the catadores who sift through the waste brings dignity to subjects otherwise considered marginal and reveals a progressive potential in work otherwise considered ‘rubbish’, writes Dagna Rams. 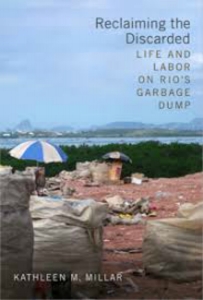 Jardim Gramacho had been Latin America’s biggest waste dump until its closure in 2012 after 34 years of existence. Reclaiming the Discarded, Kathleen M. Millar’s passionate ethnography of the place, is an account of its larger-than-dump social life. Not sparing herself in the process, the author grabs a burlap bag and joins the ranks of the local labourers or ‘catadores’ who sift through the waste to find valuable materials such as plastics or cardboard. Their activities are laced with traps: an enveloping stink can give the stomach a rough time; catadores risk being overrun by trucks or slipping inside the waste; and the work gives the skin occasional rashes. As Millar stays on the job for more than a year, she learns that the dump exudes not only smells but real affects, and offers not only hard times but also a sense of autonomy that her new friends are unable to find elsewhere. By the time the reader reaches the final pages, visiting with Millar and a former colleague the now-desolate dump, it is easy to understand when her companion sighs: ‘If the dump still existed, I would be there. For sure’ (189).

The perceived ugliness of dump work means that it is often written off as a miserable pursuit before anyone questions what it actually entails or how people feel about working on it. To rid herself of this superficial perspective, Millar plunges deep into the fieldwork. Not only does she find work as a catadore, but she also gets a room in the vicinity of Jardim Gramacho, develops close friendships with her collegues and partakes in smaller rituals such as the collective lunch of a soup made from dump harvest (ingredients found amid the rubbish). She urges readers to discard the stereotypical belief that people work in waste because they have no other options. Instead, she asks an open-ended question about catadores’ life projects and the ways in which their work gels with the pursuit of a good life. Millar is adamant not to cast her discussants as lacking (whether contracts, stability, money or other securities), arguing that this lack is more likely to be something that she, the author, perceives than what her friends actually feel.

Millar’s colleagues claim that her own actual first day on the dump happens some months into the work after a day of unfortunate happenings – falling down into the rubbish and narrowly avoiding serious injury. Through this, she realises:

I had spent so much effort during those early months of fieldwork trying to be “tough”, trying hard not to be overwhelmed or nauseous or shocked, that I had failed to recognize that at times catadores also reacted to the dump in these ways (52).

Indeed, some of her friends report crying during their first days at work. One female catadore remembers coming back home and rubbing her breasts with alcohol before holding her child. Smells are also difficult. They are, as Millar remarks, ‘the presence of another in me’ (56).

Once Millar and her colleagues overcome their ontological fears of merging with the dump, they come to appreciate it. Although as the author cautiously observes, ‘there was no such thing as a singular experience of the dump’ (39), her focus tends to be on the dump’s dynamics, its magnetic and productive aspects. In Millar’s account, the dump is a refuge. Catadores keep coming back to it. Not necessarily because they like it, but because the privatisation of the urban space in Rio de Janeiro has meant the disappearance of other self-employment options. Formal employment with its rigid schedule and scope for discrimination through work hierarchies fares poorly next to the dump worker’s control over their own time and the tacit ethos of mutual tolerance. For example, it is here that drug addicts can lead a ‘life with addiction’ (114).

Discussing earnings, Millar frames ‘the spending of catadores not through scarcity and excess […] but rather as a moral argument about what constitutes a good life’ (100), in the sense that the question of how to spend money is not far from that of how to spend one’s life. This is a line of inquiry that plunges Millar into fascinating details about how people believe the money they earn on the dump is cursed as it vanishes quickly from their pockets (a catadore who wants to divert into bar ownership has to build it brick-by-brick), but also about how ‘an ignorant person’ (pessoa ignorante) is one who does not know how to enjoy their life from the fruits of their labour.

Millar’s narrative also searches wide for theoretical inspiration. She refers to philosopher Catherine Malabou’s work on neuroplasticity to source terms for the analysis of the catadore economy as not one of flexibility but plasticity. While flexibility suggests that people adjust to economic conditions, plasticity proposes that they also give form to new economic conditions. The catadores are occasionally subject to attempts by the waste industry to corporatise their pursuits – for example through the obligation to wear work vests – but they respond by reinventing these constraints, such as by sharing the vests with unregistered workers, effectively making the work vest problematic for its inventors.

The title of the book is Reclaiming the Discarded and reclaiming dump work as a livelihood based on autonomy and a tacit ethos of tolerance is ultimately what Millar’s work achieves. The force of the argument is so strong that the reader does not doubt that the dump is a manifestation of social life that has value. This is why, when at the end of the book Millar takes us on a tour of a sanitary facility that has replaced the former dump, we will be careful not to assume that the place is superior because it doesn’t offend our senses or aesthetic preferences. Millar’s book will be important to general readers as well as to waste scholars, employment scholars and urban planners in particular. It is a book that brings dignity to people otherwise considered marginal and reveals a progressive potential in work otherwise considered ‘rubbish’.

Dagna Rams (@dagnna) is a doctoral student at the University of Lausanne. Her research is on politics and informal economies of electronic waste and scrap in Ghana.