In Digitalization, Immigration and the Welfare State, Mårten Blix focuses on two major issues that Sweden must address in order to ensure that its often-lauded welfare economics are to survive – namely immigration and digitalisation. While the study could have benefited from the inclusion of migrant voices and greater consideration of the role to be played by civil society, this book will offer insight to those interested in Sweden’s economic model and the challenges faced by OECD welfare states, writes Nicolas Parent. 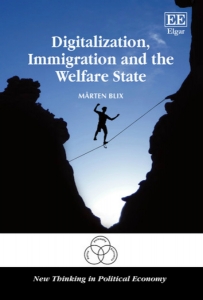 Exacerbated by the 2008 financial crisis, OECD countries have been experiencing a general rise in income disparities, alarmingly high public debt, unemployment and widespread difficulties in accessing the labour market amongst citizens. Internal pressures such as demographic ageing and political polarisation have broadened the scope of how these challenges are experienced by citizen and state, further complicated by turn-of-the-century externalities brought upon by globalisation. Amongst OECD countries, Sweden is often regarded as one of the shining stars of welfare economics, supporting a high quality of life, low income disparities and a comprehensive social safety net. However, as is explored in Mårten Blix‘s recent book, Digitalization, Immigration and the Welfare State, the Scandinavian country has not been able to keep the aforementioned pressures at bay.

Following two comprehensive chapters outlining the historical development of what is known as the ‘Swedish Model’ (Chapter Two) and changes in the labour market (Chapter Three), Blix’s book delves into what he suggests are the two major challenges that will need to be addressed if Swedish welfare economics are to survive: digitalisation and immigration.

Digitalisation produces two essential problems that will affect the future of the Swedish welfare system. Firstly, as the platform-based economy continues to grow, tax bases are ‘more global and subject to global competition’ (67), making it difficult for tax-dependent welfare states such as Sweden to secure the financial resources they need to provide a wide breadth of social services. This is further aggravated by rampant tax evasion schemes crafted by many digital platform enterprises (108). Secondly, where ‘owners of digital platforms see themselves – or ask to be seen as – conduits for independent contractors rather than employers with obligations for paying social security, pensions and training’ (54), individuals working under temporary contracts within the platform-based labour market risk falling through the cracks of the Swedish social security system which only protects those who are permanently employed. 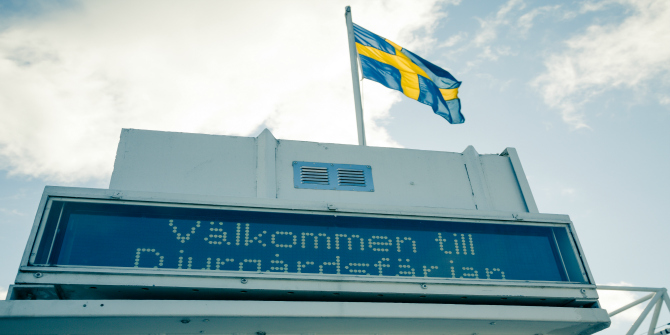 With automation becoming an integral part of the platform-based labour market, one observable impact is the deskilling of individuals within the middle-income bracket, potentially causing long-term income polarisation in Sweden. Blix draws a parallel between deskilling experienced during the Industrial Revolution to that resulting from automation and digitalisation in the twenty-first century, which he uses to argue for institutional adaptations that work towards complementarity between Swedish citizens and technology, rather than substitution (Chapter Four). This argument lays the foundation for Blix’s recommendation that welfare states decisively increase financial allocations for education, training and lifelong learning, considering that the emergence of platform-based labour will only become more rapid through network effects (66-73).

The cost of Sweden’s welfare system has been steadily increasing, and while demographic ageing used to be the primary reason for this, Blix suggests that this factor has now been supplanted by the costs associated with immigration (100). As people’s willingness to pay high taxes rests upon the legitimacy of the social contract (116), increasing the immigrant tax base through employment will also be central to the future of Sweden’s welfare state.

Immigrants, however, face three major hurdles in securing employment in Sweden: high entry-level wages set by collective bargaining agreements and the divide this creates between Sweden-born ‘insiders’ and foreign-born ‘outsiders’; the absence of low-paying service jobs typically attainable by individuals with a low level of education; and institutional rigidity in validating immigrant educational attainment (41). As developed through his analysis of Sweden’s labour market in Chapter Three, Blix suggests that while the collective bargaining process between employer organisations and unions has been beneficial in regulating income disparities for Swedish citizens, the rigid conditions and high-entry barriers it has created must now be reviewed to accommodate for Sweden’s growing immigrant community.

The main recommendation put forward by Blix is that the minimum wage set through collective bargaining be lowered, and thus the wage dispersion increased (156). As a result of the distributional effects associated with the Swedish Model, this may, however, be considered a threat by blue-collar workers (162). Also, the central government will have a limited ability to facilitate this sort of change, as wage-setting remains in the hands of employer organisations and labour unions (163). An auxiliary recommendation brought forth by Blix is the need to strengthen education and skill-building for immigrants in Sweden (157). Although a sensible recommendation, this ladder is largely based on Blix’s understanding of immigrants as having a low level of education or as being uneducated and unskilled (120), although data from Statistics Sweden suggests a more nuanced reality.

Blix considers the platform-based economy as particularly useful in facilitating immigrant employment. He uses both Uber and Upwork platforms to exemplify this. While the first allows for spare seats in a car to be monetised, the latter opens a space for immigrants to offer up their skills to a paying digital audience, for example by supplying ‘language services unrestricted by geography’ (157). As Blix explains, the positive effects of immigration in Sweden ‘crucially depend on immigrants finding and creating jobs and the contribution that they would make to sustain the high cost of welfare through taxes’ (149). He therefore contends that ‘the overall welfare gains from the platforms could be substantial’ (158).

Blix does recognise, however, that this is a short-term solution that needs to be supported by a long-term policy programme that provides immigrants with education and other forms of lifelong learning. He suggests that these programmes be crafted in a way that responds to digitalisation, asserting that ‘skills, especially digital skills, will play a key role’ (139). He warns, however, that while ‘institutional reform that improves the way different forces interact is crucial to managing the economy and especially so in times of crisis […] the right tools will have very little meaning or impact if they are not accompanied by a strong political will’ (29), a view that is shared by others specialising in welfare economics.

Blix’s book has significant takeaways for those interested in the state of play of Sweden’s economic model and, more broadly, the challenges faced by welfare states within the OECD context. It also provides some illuminating insights for those wishing to understand how the emerging digital economy mingles with (and disturbs) more traditional labour markets. In relation to the study of migration, the book gives readers a relatively rudimentary snapshot of the financial impact of immigration and also suffers from the complete absence of migrant voices and of an analysis of the social dynamics between Swedish and migrant communities. As a result of the scale chosen by Blix to analyse Sweden’s political economy, specialists of macropolitics and macroeconomics will be interested in his approach, but as he does not consider civil society as playing any sort of political role in the response to the challenges of digitalisation and immigration, the book may not appeal to all working within the field. As a final comment, readers may wonder if a shorter publication could have achieved the same level of depth, considering that there is a significant amount of repeated material throughout the book.

Nicolas Parent is an independent researcher and co-Editor of the monthly newsletter Rights in Exile, published by the International Refugee Rights Initiative. Based in Lima, his current work focuses on the regional responses to the Venezuelan exodus, critically engaging with the issues of protection and status determination in Latin America.