In the Handbook of Gentrification Studies, Loretta Lees with Martin Phillips bring together contributors to explore different types of gentrification around the world, debate the term’s utility for describing diverse phenomena and consider modes of response. The volume offers a good starting point for understanding the wide-ranging discussions of gentrification, underscores the need to approach it flexibly, comparatively and through a cosmopolitan lens and also invites reflection on the complicated potential offered by communal resistance, finds Helen Traill. 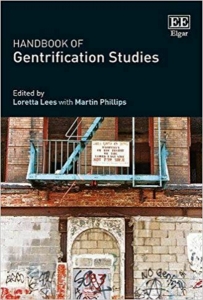 ‘As this book shows, the need for alternatives to gentrification (and indeed decline) is more urgent that ever, given how this socially unjust process has progressed through time and space’

The Handbook of Gentrification Studies closes with the above lines, lines that emphasise the justice problem posed by gentrification and the urgent need to respond to it. This encapsulates to some extent the ethic of the book, although demonstrating the progression of gentrification through time and space provides much more of the material for the volume than proposing alternatives. In this regard, the Handbook is a broad collection spanning a variety of urban shapes and scales that aims to take stock of the mature interdisciplinary field of gentrification studies. As a whole, it shows clearly the tensions within that field: particularly debates between Marxist and postcolonial approaches to urban studies, and the sticky question of how to theorise in a more truly comparative and cosmopolitan fashion.

The Handbook is made up of 27 chapters written, in editor Loretta Lees’s words, by ‘longstanding and up-and-coming researchers’ (1). It is subdivided into five sections. The first two deal with theory and concepts, before a third section that examines social cleavages beyond and in addition to class. The fourth part explores different types of gentrification, from slum gentrification, retail gentrification through to wilderness gentrification. The fifth, and arguably most politically pressing, section concerns resisting gentrification. As the varied parts of the book attest, gentrification studies now spans a wide terrain (literally and metaphorically). The book includes a good amount of reflection on questions of how to deal with the global geographies of power both in its subject matter and in terms of a broader reflexivity around where scholars are writing from.

There remain questions that haunt the book: not least whether gentrification is the best term to encapsulate the breadth of displacement phenomena discussed therein, from slum clearance as urban renewal in the Global South (Eduardo Ascensão, Chapter Fourteen) to the middle classes seeking wilderness (Darren Smith, Martin Phillips and Chloe Kinton, Chapter 22). A rather dense chapter on theorising gentrification by Freek de Haan (Chapter Three) moves the collection into the territory of seeing the term as politically urgent and necessary, yet simultaneously ‘inescapably inadequate’ as a conceptual tool, arguing for an ‘earthly gentrification’ that stays with the ambiguities and possibilities of gentrification as it is lived (27). Despite this, the adequacy of the gentrification concept is a theme that recurs again and again through the first sections of the Handbook as each author grapples with it. Unsurprisingly in a handbook of gentrification studies, no-one disavows the term, but the argument is clearly resonant across the wide variety of subfields encapsulated by the volume.

Image Credit: ‘Gentrification in Action’ by Kyle Pearce licensed under CC BY SA 2.0

One contribution to the book that is particularly helpful in thinking through how contemporary gentrification studies could be conceptually deepened, and one of the stronger chapters in the collection, is Michaela Benson and Emma Jackson’s on how gentrification studies should take into consideration the rich sociology of class. They argue for the need to see class as ‘relational, situational and in progress’ (63). Drawing on the ethnographic work of Li Zhang (2010) on Kunming and Kirsteen Paton (2014) on Glasgow, they urge the reader to acknowledge the ambiguous (re)production of class through gentrification itself, and argue we should see gentrification as a process of class struggle. In this, Benson and Jackson call into question what they call a methodological flaw in terms of approaching gentrification as a description of populations, as a process of displacement of already established and black-boxed class actors. Similarly, Geoffrey de Verteuil (Chapter 25) in his later chapter interrogates the relation between immigration and gentrification, pushing for a reconsideration of the ‘black and white’ of displaced incumbent versus high-status incomer. In both these chapters, excellent work is done to unpick assumptions about who has social power and to situate that power as made through urban social processes themselves.

Perhaps the book’s most exciting element is the final section, which turns towards responses to gentrification. Given the previous four sections on the varieties and vicissitudes of gentrification, the unusual reader who reads from cover to cover might experience this as a welcome note of promise after the torrent of displacement up to this point. It brings the book back to Lees’s notion that the most pressing concern is that ‘resistance without the elaboration of feasible alternatives is simply not enough’ (xvii). Two chapters stand out in this section. The first is Susannah Bunce’s contribution on alternatives to gentrification that situates Community Land Trusts and Ecovillages as ways of reimagining housing as a question of social justice. Although wary of the risk of appearing overly optimistic about the possibilities of alternatives, the need to think differently about land tenure and reshape relations to urban land in particular are raised as important to consider here. Equally, Steele’s chapter on self-renovating neighbourhoods, which reads easily with the punchy enthusiasm of the proselytiser, delineates the possibilities of a radical empathy on behalf of incomers and indeed the potential of collectivism as a response to the false binary of gentrification or decline.

This section as a whole is an invigorating note on which to end the collection, but despite caveats about the potential to romanticise local action, neither Steele nor Bunce get to grips with the ‘folk politics’ (Nick Srnicek and Alex Williams, quoted 479) that Steele readily notes. Questions arise about who comes to be involved in either self-renovation, CLTs or indeed Ecovillages. I don’t want to dampen the critical optimism of resistance to gentrification, but there is a need to engage with the often-awkward questions that arise in relation to local action, particularly around the micro-politics of who gets to be part of community groups. This section is hopeful, and optimism can be politically useful (indeed, Steele does a good job of outlining how important a sense of efficacy is to action). Nevertheless, the empirical evidence of marginal gains in Bunce’s chapter seems to suggest the ambiguities of actually-existing neighbourhood resistance.

Overall, the Handbook of Gentrification Studies is useful and informative. It is a good starting point for encountering the variety of debates on the topic of gentrification and its current vexations. It demonstrates clearly the need to think in flexible, cosmopolitan and comparative ways about gentrification, and consider seriously the complicated potential offered by communal resistance to gentrification.

Helen Traill is a PhD student in the Sociology department at the LSE. Her thesis explores practices of community in community gardens and urban green spaces, and the relationship they have with wider urban social processes. She is particularly interested in urban commons and land ownership, and the political potential of communal practices. She tweets @traillhelen.