In Human Capital in Gender and Development, Sydney Calkin engages with contemporary debates in feminist political economy by critiquing human capital theory and the role it has played in shaping recent gender-focused development work. This book helps to extend current conversations regarding the contradictions that occur when gender equality ideals meet market logic, writes Rebecca Liu. 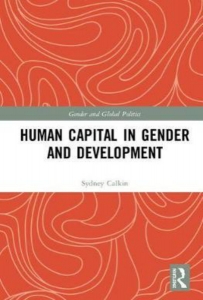 In an 2013 opinion column for the BBC, then-Managing Director of the World Bank Caroline Anstey warned against ‘the price of violence against girls and women’. In an imperfect world riddled by violence against women, putting a price tag on violence was, the editorial argued, an imperfect solution to an intolerable problem: ‘it may be precisely that price tag that will finally persuade policymakers, communities and societies to take domestic violence seriously.’ When all other exhortations to respect our basic dignity have been exhausted, capital appears as the last man (yes, man) standing at the negotiating table in the violent calculus of life. But then again, is this benevolence, or a more nebulous form of power?

The cold acquisitive logic of market capitalism and the desperate vulnerability of bare life under its domain meet in Sydney Calkin’s Human Capital in Gender and Development, which offers a critique of human capital theory and its role in shaping contemporary gender-focused development work. Human capital is a Chicago School economic theory pioneered by Gary Becker that, as Calkin notes, ‘re-imagines humans as a form of capital and re-imagines wages as a return on capital’ (3). Calkin’s work engages with contemporary debates on feminist political economy by critiquing the function of human capital theory in gender-based development work. To do so, Human Capital examines the slow inclusion of gender into the development work of the World Bank in the 1990s and private sector philanthropy in the 2000s, and also offers a broad-scale conclusion on the effects of human capital theory on the gender equality movement today.

Human capital theory, after all, is where our current tense bargain between extractive economic logic and high-minded social ideals took root. Coined by Becker in the titular 1964 book, the theory expanded our parameters of what could be included under the bracket of ‘capital’; schooling, healthcare as well as ‘lectures on the virtues of punctuality and honesty’ (15) were framed as vital investments in future returns to be eventually reaped from our society’s workers-in-waiting. When frustrated economists and activists ran up against the boy’s club of the World Bank in the 1990s, trying to get them to take gender equality seriously, human capital theory proffered itself as a useful tool in their bargaining.

Their efforts bore fruit. In 1995, then-President James Wolfensohn made a landmark speech at the Fourth UN Conference on Women, where he addressed past criticisms of the World Bank’s myopia when it came to ‘gender issues’:

I wanted to demonstrate personally that the World Bank is committed to the causes that you have come here for, and that my colleagues in the Bank, both in Washington and in our offices around the world, are committed to working with you. And it may well be that in the past there have been examples of things that we’ve done wrong.

Now, the World Bank is a regular supporter of women in development. In May this year, it published a landmark report on ‘Unrealized Potential: The High Cost of Gender Inequality in Earnings’, which warned that the gender pay gap has cost the world $120 trillion. ‘Globally’, the report warns, ‘women account for only 38 percent of human capital wealth versus 62 percent for men’. Private institutions have followed suit, with corporations increasingly adopting social responsibility initiatives alongside business-as-usual. One major such initiative examined in Human Capital is the Girl Effect, a high-profile NGO originally launched out of the Nike Foundation in 2008. 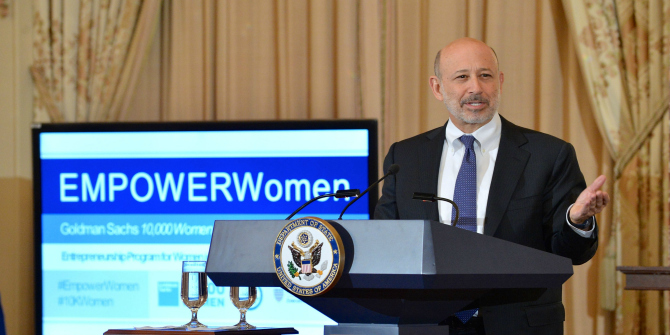 And yet, Human Capital is not a triumphalist story – it would be a much shorter, and less interesting, book if so. In painting this picture of greed intertwining good, hard quantitative capital with highly personal to basic dignity, Calkin teases apart the inevitable contradictions that come with the project and asks: who does this ‘progress’ really serve? As with many discussions of social emancipation under capitalism, the answer is complicated. General reservations about corporate, Lean-In feminism are well-known; Human Capital extends the conversation, looking specifically at how market-based development programmes are wielded to offer pointed critiques of the contradictions that occur when gender equality ideals meet market logic.

In that space, you will find as much social conservatism as you will progressive flecks of empowerment. The arguments used by the World Bank in favour of development, Calkin finds, often stem from regressive archetypes about the ‘flexibility’ and ‘can-do ethic’ of women. The subtext: compared to men, they are better at thriving under hardship and more willing to accept jobs below their social status, making them ever more suppliant labourers. If this is somehow a path to liberation, it is a perverse, roundabout one. Moreover, most development projects focus around the archetype of the girl; adult women are mostly spoken through the lens of heterosexual motherhood – the market apparently has not much room for the ‘low-skilled’, childless woman, and ‘exclud[es] those women whose bodies or lives cannot be ‘‘read’’ as sufficiently productive’ (148). This will come as a disappointment for feminists whose politics affirms the inherent dignity of every woman, regardless of their ability to be folded into the market. For those in the hyper-targeted girled audience, furthermore, their ability to be ‘heard’ is often contingent on their ability to affirm pre-existing Western market narratives of the importance of economic entrepreneurship: here, Calkin cites gender and sexuality scholar Shenila Khoja-Moolji’s research on the Girl Effect, which discovered that ‘girls who articulated alternative narratives that did not center economic independence or income generation were excluded from the project’s publicity material’ (149).

Calkin’s examination of privately-funded philanthropic initiatives raises further questions about who really benefits from all this work. It comes as no surprise that corporate social responsibility initiatives tend to spring up at a time when corporations themselves come under public scrutiny. Projects such as Goldman Sach’s 10,000 Women Initiative, a public education programme by the investment bank to, in its own words, foster ‘economic growth by providing women entrepreneurs around the world with a business and management education, mentoring and networking, and access to capital’, was launched in May 2008, right when financial firms were getting heat for the Wall Street crash. Consulting firm McKinsey & Company affirmed as much back in 2010 in its Business of Empowering Women report, noting that ‘investing in making life better for women in developing countries can be an effective way to enhance a company’s reputation and brand’ (169). It is testament to the myopic marketisation of corporate culture and the persistence of human capital theory that such a turn of phrase can be seen as a win-win opportunity. The ultimate stakes for Calkin in outlining the shortfalls of corporate social responsibility are not so much in levelling charges of individual hypocrisy against select companies, but rather pointing to the rise of a private, market-based mode of governance that comes at the expense of the role of public institutions.

A somewhat overwrought, self-help dictum states that ‘the mind is a beautiful servant and a dangerous master’. Hackneyed as it is, it is a useful warning against the current placement of human capital theory – and arguably the entire economics profession in general – as an a priori foundational block on which to build human life. The problem with building a social project on market principles is that these principles only value bare life on the condition that it is profitable, which is another way of saying it doesn’t really value it at all. Human Capital drives home the many contradictions of harnessing capital as the fundamental driver of all forms of social life. It is about the inevitable conditionality of your personal triumphs under a market society, and the incoherency that often comes with articulating your untrammelled dignity in a world steeped in the marketisation of human bodies. To end the book, Calkin notes ‘it is my hope that the feminist critique developed in this book will provide relevant conceptual tools […] to help us think creatively about feminist futures in the political economy’. I’d like to hear what those may be.

Rebecca Liu is a writer in London. She holds an MPhil in Political Thought and Intellectual History from the University of Cambridge, and previously studied history at the University of Chicago. She is an editor for King’s Review, a magazine of academic journalism, and tweets at @becbecliuliu. Read more by Rebecca Liu.