In Alison Bechdel: Conversations, editor Rachel R. Martin collates a number of interviews with the cartoonist Alison Bechdel, known for such works as Dykes to Watch Out For and the graphic novel Fun Home. As the collection traces the significant influence of Bechdel’s investment in and representation of over three decades of lesbian cultural and social politics, it offers an illuminating glimpse of a changing history and grapples with the contradictions of the shift from invisibility to visibility for lesbian figures in visual and literary culture, writes Clara Bradbury-Rance. 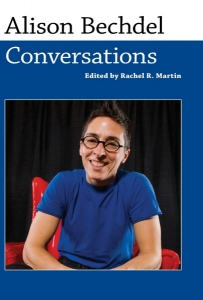 In her introduction to The Best American Comics 2011, Alison Bechdel writes of the ‘universe of possibility’ that suddenly emerges when what we take for granted – the status quo –starts to recede. This is the thought with which Rachel R. Martin begins her edited collection of interviews with Bechdel, and the space into which she places the cartoonist’s work. Perhaps, for a writer who entered the field with short cartoon strips published in fringe feminist/LGBT newspapers such as WomaNews, lesbian representation must reside in such a space of possibility: hopeful, but necessarily anticipatory.

Martin’s book, made up of reprinted interviews sourced from a variety of publications, is framed around what she calls ‘simultaneous feedback loops’ (xi), identifying the significant influence of Bechdel’s investment in and representation of three-plus decades of lesbian cultural and social politics. A key claim the book makes is that her work not only reflects but also creates these spaces. At times in Martin’s introduction this is overemphasised; Bechdel’s ‘notoriety’ (x, xii) is celebrated but not always analysed. And yet, such a celebration is itself a political act, and the book makes no secret of putting front and centre Bechdel’s rejection of the masculinist, heteronormative, presumed-to-be-universal status quo.

An overview of Bechdel’s oeuvre narrativises a shift from invisibility to visibility for lesbian figures in visual and literary culture. And yet, as an out lesbian cartoonist working through the 1980s, 1990s and into the twenty-first century, Bechdel also signals the contradictions of that shift – a complex web of histories of and approaches to identity; the uncomfortable juxtaposition of the desire for visibility and the fear of it; and anxieties about how to take pride in the assimilation of gay community. Later interviews in particular reveal an ambivalence about accountability and community when a once disregarded and even disdained bid for mainstream appeal comes to fruition. When asked ‘are gay people like everybody else now?’ (Martin, xx), Bechdel is willing to admit to a sadness that, perhaps, they are. This is a distinctive concession to homonormativity, the ability to concede and at once bemoan it: ‘I like being a pervert in the Twilight’, she says (Joost, 37; further citations of the collection make reference to the interviewer).

Alison Bechdel: Conversations offers a selection of interviews from a wide timespan between 1990 and 2017, a chronology that offers an illuminating glimpse of a changing history. While the interviews in the book could be more robustly edited for concision, one does sense, from the repetition of particular questions, a gradual but significant shift in Bechdel’s thinking – about gender, form and conformity. Bechdel’s ensemble of co-protagonists are characterised here as ‘walking through’ (xiii) moments of national trauma from AIDS to (the first and second) President Bush. In 2007, in an interview with John Zuarino (42), Bechdel describes the year 2000 as a sinister turn in US politics; by 2016, having given it up nearly ten years earlier out of boredom, she is writing a new strip of Dykes to Watch Out For in protest at the election of President Donald Trump (Swisher, 100). Political injustices also align with graphic ones – cartoon cat Garfield’s female companion being drawn as such an ‘other’ that she looks like a different species; women never being given ‘the punchline’ (Rubenstein, 27).

Throughout the book, we return to the alignment of the personal and the political, a motto that both Bechdel and the book’s editor use as a framing device. The intense intimacy of Bechdel’s words about her mother’s simultaneous threat and vulnerability, for instance, exists in these interviews alongside her despair about the state of the government. One shifts into the other. ‘Verging on solipsistic’, as she writes of her own autobiographical work, Bechdel never strays too far from wider contexts (Quinn, 74). And this is partly because it is so citational – indeed, conversational. The book is entitled Conversations, and this style and status of delivery is particularly Bechdelian; as Martin tells us (xx-xxi), the graphic novel Fun Home references authors from F. Scott Fitzgerald to ‘Marcel Proust, Henry James, Albert Camus, E. H. Shepard, Colette, Kate Millett, and James Joyce’. Bechdel’s work is ever in conversation, surrounding her protagonists with the ‘companion texts’ that, as Sara Ahmed writes in Living a Feminist Life, keep us ‘in very good company’.

This is the very literary companionship that makes Bechdel’s coming out possible (Gross, 82). Moreover, her politics come from her lesbianism, a sexual awakening forcing her into a new kind of awareness of privilege (Sollberger, 46; Samer, 51). This lesbian feminist politicisation demands to be accompanied by a historical and terminological contextualisation that isn’t fully fleshed out in this book. The visibility of queer voices and the visibility of lesbian voices are two different projects; arguably, Bechdel manages both, but not, I would argue, in the same breath. In many ways, lesbianism is what is most specific, and thus most radical, about Bechdel’s graphic form. As Martin writes: ‘She cartoons in this way, not to alienate readers, but rather to challenge readers to make the leap to identify with her characters, to identify with women, specifically with lesbians’ (xiv).

Bechdel’s young protagonist Alison comes to identity through identification (Gross, 79); in the Tony award-winning musical theatre adaptation of Fun Home, she is staged and lyricised as a young dyke identifying with the ‘old-school butch’ who walks into a diner. In the moving song ‘Ring of Keys’ the ‘young Alison’ celebrates the stranger’s ‘swagger and your bearing, and the just right clothes you’re wearing’. For lesbians, a pleasure; for everyone else, surely, a revelation. ‘In a way my audience is real demanding, you know?’ quips Bechdel in conversation with Chris Dodge in 1990 (13). By 2015, the demand is for butch women to be portrayed beyond the stereotype of ridicule and pathology. It is this revelation that, one can tell, infuses Alison Bechdel: Conversations with a spirit of ardour and awe, if not always critical appraisal. Still, it is a book that allows us to step with Martin into Bechdel’s work, offering not only a ‘leap to identify’ but a ‘leap of identity’ (Dodge, 4).

As Monica Pearl has written of Fun Home, ‘a generation spanning the middle of the twentieth century is marked by the door of a closet: firmly shut, then creaking open’. This visual metaphor highlights the paradoxes of surface and substance that Bechdel’s work, and the graphic form she utilises, permit; with images, she tries to grapple with the possibility of naming. With images, Bechdel tells us something about words.

Clara Bradbury-Rance works in the Department of Liberal Arts at King’s College London, where both her teaching and research focus on feminist and queer theories of film, popular culture and new media. Her book Lesbian Cinema after Queer Theory is published on 31 March 2019 with Edinburgh University Press.