In Across Oceans of Law: The Komagata Maru and Jurisdiction in the Time of Empire, Renisa Mawani tells the story of the 1914 voyage of the Komagata Maru, which not only drew attention to the racially and politically unequal character of the British Empire and its Dominions, colonies and territories, but also raises important contemporary questions concerning how the ‘free sea’ is conceptualised, claimed, regulated and disputed. This is a convincing and elegantly argued analysis that positions this historical voyage as a lens through which to scrutinise broader issues of race, migration, jurisdiction and power, writes Jen Hendry.

Across Oceans of Law: The Komagata Maru and Jurisdiction in the Time of Empire. Renisa Mawani. Duke University Press. 2018. 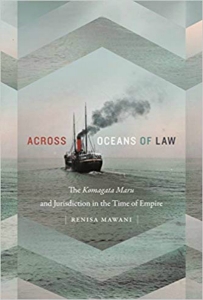 On 18 May 2016, nearly 102 years after the steamship Komagata Maru sailed into Vancouver harbour, Canadian Prime Minister Justin Trudeau made a full apology for the government of the day’s decision to deny entry to the ship and its 376 predominantly Punjabi Sikh passengers. Intended by its commander, Gurdit Singh, to challenge Canadian immigration restrictions that were ‘openly and unabashedly aimed at excluding Indian migrants’ (36), the 1914 voyage of the Komagata Maru drew attention to the racially and politically unequal character of the British Empire, its Dominions, colonies and territories. In Across Oceans of Law, Renisa Mawani tells the story of this controversial vessel and, in so doing, raises important contemporary questions about how the ‘free sea’ is conceptualised, striated, claimed, regulated and disputed.

In this sense, Mawani’s Across Oceans of Law is much more than an account of yet another dark chapter in Canadian and British imperial history or, indeed, of the law of the sea. Similar to her first monograph, Colonial Proximities, which explored colonial processes of Chinese migrant exclusion and Aboriginal dispossession in Canada’s emerging settler state, this book sits at the interface of legal history and critical theory. The five chapters of Across Oceans of Law loosely follow the chronology of the Komagata Maru’s journey from a Glasgow shipyard to Hong Kong, on to Vancouver and finally to Calcutta. Each one is ‘narrated through a specific legal artefact, concept, or figure: the sea, the ship, the manifest, the indigenous, and the fugitive’ (31). Through an enlightening juxtaposition of writings from European thinkers – mainly Hugo Grotius and Carl Schmitt – with accounts from Gurdit Singh and Husain Rahim, Mawani introduces one of the core premises of the book: namely, the ‘disruption of [legal and political understandings of] the land/sea divide inaugurated and imposed by European thinkers’ (32).

This ‘disruption’ comes in several forms, not least in how Mawani draws our attention to those apparently neutral spaces, objects and practices associated with the sea. Foremost among these is the ship, which she cites as a ‘vital agent of imperial power’ (12) due to its role in connecting far-flung destinations and thus ‘reinvent[ing] and expand[ing] the contours of law, while constituting the sea as a legal domain’ (49). Further key technologies involved in the juridification of the oceans and the creation of Britain’s maritime empire are discussed throughout the book, some of which may be more familiar to readers than others: while the cartographic practices of European empires and their lingering effects have been the subject of substantial interdisciplinary critique (even making it into an episode of The West Wing), Mawani’s analysis of Greenwich Mean Time (GMT) as a register of imperial power and a homogenising influence across these distant spaces was, for me, both fresh and compelling. Indeed, I found that it was this deceptively non-neutral idea of global time in the context of oceanic travel that hammered home just how it was that Britain ‘projected its presumed racial, cultural, and civilizational superiority over its Dominions, colonies, and territories’ (28).

The idea that race operated within the British empire as a regime of power is central to this book. Race was responsible for differentiating, diminishing and even invisibilising British subjects according to their nationality, civilisation and developmental history. The author draws upon Re Munshi Singh (1914) 20 BCR 243, the Canadian Court of Appeal’s hearing of the test case filed by a passenger aboard the Komagata Maru, to outline how racial inequalities were not exceptional but rather normalised, underpinning the entire ‘legal and political structure through which the British Empire was ruled’ (118). Mawani draws parallels between the unevenness of the jurisdictional spaces comprising Britain’s maritime empire and the racial asymmetries implicit in the legal processes that regulated immigration and, in so doing, highlights the steps taken to exclude Indian British subjects from the Canadian Dominion, and to cultivate whiteness within its borders (131, 137). Taken alongside previous chapters’ discussions of transatlantic slavery and the related considerations of positive and negative personhood, whereby efforts were made to ‘humanise the ship and dehumanise the slave’ (88), these strands combine to form an illuminating study of colonial and imperial racial power dynamics.

Layered on top of the book’s discussion of race is its engagement with indigeneity, which is twofold. First, Mawani again uses the lens of Re Munshi Singh to highlight the manner in which the Canadian Court of Appeal mobilised the supposed ‘protection’ of Indigenous peoples as grounds for denying entry to ‘undesirable’ Indian migrants (198), thus showing how ‘indigenous dispossession and immigration prohibitions were tightly intertwined’ (175). Second, and in a move illustrative of how the free sea was seen as a ‘necessary pathway to global mobility and to Indian freedom’ (71), the author points to the stated aims of the Indian passengers on board the Komagata Maru to ‘carry out a great scheme of colonization within the British Empire’ (149, fn 170), as was their perceived duty as British subjects. In outlining this Indian aspiration to settler colonialism, Across Oceans of Law introduces the idea that anticolonialism, despite having emerged through racial and colonial histories, was (and is) not necessarily disruptive of them.

My final comment concerns the book’s core approach, that is to say, ‘oceans as method’. Throughout the book the author uses this phrase to denote a shift in perspective that ‘redirects the optics from land to sea’ (6), and draws upon the ‘dynamic materiality and rich metaphoricity of the sea as both a technique of writing colonial legal history and as a conceptual frame that foregrounds movement and change’ (234). I found myself appreciating the method far more than I did its moniker: the term ‘oceans as method’ was, for me, more esoteric than it needed to be, not least because the repositioning of the terrestrial and aqueous was straightforward in its ingenuity and genuinely convincing in its execution. Indeed, there is here an elegance in the delivery of the core idea: taking the Komagata Maru – the ship itself, the voyage, the incident, the aftermath – and making this material object, this historical passage, this triangulated event, a composite lens through which to scrutinise broader issues of race, migration, jurisdiction and power.

Dr Jen Hendry is an Associate Professor in Law & Social Justice at the University of Leeds School of Law, and a Visiting Fellow (2019) at the Centre for Comparative & Public Law at the University of Hong Kong Faculty of Law. Her research covers social and legal theory, socio-legal studies, and comparative legal studies, specifically issues of Indigenous justice and legal pluralism. Jen is Director of the School’s Centre for Law & Social Justice and the Vice-Chair of the Socio-Legal Studies Association (SLSA).