In Little Platoons: How A Revived One Nation Can Empower England’s Forgotten Towns and Redraw The Political Map, David Skelton argues that a renewed ‘One Nation’ Toryism can rejuvenate ‘forgotten’ or ‘left-behind’ towns such as Consett in Country Durham. This book signals the Conservative electoral interest in forgotten towns, but falls far short of a credible and serious programme for their revival, writes John Tomaney.

Little Platoons: How A Revived One Nation Can Empower England’s Forgotten Towns and Redraw The Political Map. David Skelton. Biteback. 2019. 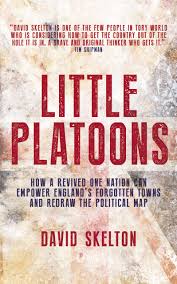 Consett is a singular place. Perched on a bluff in the Pennine foothills in north-west County Durham, it is a product of ‘carboniferous capitalism’. It owes its existence to the opening of its ironworks in 1840, made possible by the fortuitous co-location of steam and coking coal, iron ore and limestone. ‘The Works’ dominated the town, notoriously covering it with red dust as a by-product of the production process. But, along with nearby mines and an extensive railway infrastructure, it provided jobs, economic security and prosperity for almost 150 years. This changed irrevocably in 1980 when the Works, by then nationalised, was closed. The 40 years since have been a struggle and Consett now finds itself assigned to the category of ‘left-behind places’.

The Brexit referendum, often seen as a cri de cœur by ‘left-behind towns’, has led to increased media and political attention on the fate of such places. In Little Platoons: How A Revived One Nation Can Empower England’s Forgotten Towns and Redraw The Political Map, David Skelton  – born in Consett and, according to his own biography, ‘one of the three most important thinkers on the right’ (177) in British politics  – uses the town as his muse to explore what is to be done. He makes the case for a ‘One Nation’ Toryism to revive ‘forgotten towns’. Traditionally, Consett is Labour heartland, but Skelton’s premise is that it is now ripe for a Tory insurgency.

Skelton begins by recalling his childhood in Consett and the commitments of his grandparents to Labour and Methodism. Following the Works’ closure, well-paid, secure jobs have been replaced by precarious, low-paid ones. A gap has emerged between prosperous cities and ‘forgotten towns’. He attributes these to the rise of ‘economic liberalism’, originating with Margaret Thatcher but continued with minimal amendment under Tony Blair and David Cameron, which asserts the primacy of market forces in the name of efficiency. With jarring understatement, Skelton observes that ‘the Thatcherite impact on the north can’t be seen as entirely positive’ (31). ‘“Rolling back the state” wasn’t sufficient to allow a flowering of entrepreneurialism and growth in many areas’ (126), leaving forgotten towns ‘denigrated and devalued’ (99). Above all, economic liberalism destroyed cohesive local communities.

These problems are compounded, in Skelton’s view, by the rise of ‘identity politics’. While Britain has become more ‘tolerant’ (132) – measured, for instance, by declining prejudice toward LGBT people – identity politics has dissolved the glue of patriotism and diminished national solidarity. (Skelton ignores the role identity politics played in securing the improvements he extols.)  Labour has become the party of cities, ethnic minorities (especially Muslims) and frustrated millennials, neglecting its working-class heartland.

For Skelton, this scenario opens space for a new One-Nation Toryism, which eschews economic liberalism, to appeal to disgruntled forgotten towns. Benjamin Disraeli is the hero of this tradition and the Primrose League – the mass working-class Toryism of the late Victorian era – is the model. Quentin Hogg, Roger Scruton, Ian Gilmour and Iain MacLeod make up the supporting cast. Skelton contends that ‘the market doesn’t always work perfectly’ (175) and sees value in the state intervention rejected by Thatcher. Tories ‘should look to maintain the dynamism of capitalism, while ironing out its rough edges’ (199), build on the local pride and identity of the forgotten towns and foment stronger national identity.

The story contains some truth but is a fatally thin and partial account of what produced forgotten towns. It overlooks powerful structural forces that lie behind the decline of towns, including the reduced share of national income going to workers, rising returns to capital, constraints on the rights of organised labour and their uneven geography. In his account of Consett, Skelton says nothing about the central role of trade unions in securing decent wages and defending terms and conditions. He does not address the changing gender composition of the labour force, the ageing of the population and attendant social challenges and says little about the spiralling health crisis in forgotten towns.

Skelton demands ‘bold and ambitious’ (223) action, but what he offers is ill-defined, contradictory and poorly evidenced. His miscellany includes an ‘aggressive regional policy’ (231), investment in ‘the right kind of infrastructure’ (235), financial incentives to attract new firms, relocating government jobs, employment growth in town centres rather than business parks, devolution to regional and local authorities, reductions in business rates and corporation tax, freeports, a workers’ charter and so on. It is not clear upon what criteria these actions are proposed, what their impact will be on forgotten towns or how their success will be measured. Many have been tried before and found wanting.

Other proposals are likely to have unintended consequences: Skelton suggests universities should be compelled to engage more with local communities, but this is likely to favour the cities where they are located rather than towns where they are absent. He is dismissive of public health policies as nannying but offers no solutions to endemic ill health in forgotten towns. His only concrete proposal for new infrastructure is to back rail improvements between the cities of Manchester and Leeds, but it is not explained how this will help forgotten towns like Consett or renew community bonds. He calls for the ‘reindustrialisation’ of forgotten towns building on their ‘enduring skillsets’ (249), but these are places denuded of the skills to support advanced manufacturing. Critically, it is unclear why the Conservative Party should be the vehicle for reviving forgotten towns. The Primrose League is long gone. It is polling, focus groups and tactical calculation rather than mass mobilisation that shape policymaking. Moreover, the rising forces in the Conservative Party favour a deregulated ‘Global Britain’ and regard British workers as ‘the worst idlers in the world’.

Presumably anticipating an imminent election, the book bears the hallmarks of hasty preparation. An infuriating feature is the complete absence of the most basic sources for the many direct quotes and data used. There are errors and infelicities. Lord Hailsham did not don a flat cap in the 1950s (160) but did so in order to promote his The North East: A Programme for Regional Development (Cmnd 2206), published in 1963. Sentences are repeated word for word. The handling of statistical evidence is less than assured: ‘a BBC report found that the bus network in the UK has declined by some 8 per cent within a decade’ (54) – but which decade? Skelton states that ‘Toryism had little truck with Unitarianism, homo economicus and the crude simplicities of laissez-faire’ (178) – presumably an intended reference to utilitarianism rather than the Protestant sect.

Beyond a few reminiscences of Skelton’s early life, Consett provides only pale background rather than vivid colour. This is a pity. It is a fascinating place that deserves attention. Moreover, understanding what is truly possible in policy terms in such towns requires deep research and engagement. The book signals the Conservative electoral interest in forgotten towns, but falls far short of a credible and serious programme for their revival.