In Qatar and the Gulf Crisis, Kristian Coates Ulrichsen offers an account of the Gulf crisis that erupted on 5 June 2017, focusing particularly on the measures and initiatives developed by Qatari policymakers, citizens and residents in response to the blockade. In providing comprehensive and nuanced detail on the contested regional issues at stake, this is an essential book for anyone looking for an entry point into understanding the Gulf crisis, writes Betul Dogan Akkas. 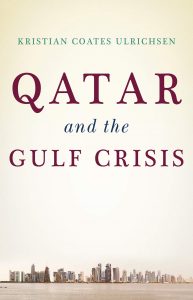 Qatar and the Gulf Crisis by Kristian Coates Ulrichsen is a timely book that contributes to the literature on the current Gulf crisis that erupted on 5 June 2017. Starting with allegations over Qatari Emir Sheikh Tamim’s statements on the allegedly hacked Qatar National News Agency website, the four states called the Arab Quartet (Saudi Arabia, Bahrain, Egypt and the United Arab Emirates (UAE)) declared an air, land and sea blockade on Qatar. This shocking political tension in the Gulf was in the middle of Ramadhan (the Holy Month for Muslims) and marked the beginning of regional turmoil that paralysed diplomatic and commercial relations, family ties and many other social dimensions in the Gulf Cooperation Council (GCC). Ulrichsen’s book highlights the unfolding of the crisis, relaying the social and political atmosphere in Qatar before the siege and conceptualising official responses and strategies towards the challenges posed by the Arab Quartet states.

The book sheds light on the Gulf crisis and the reactions of Qatari policymakers over nine chapters, divided into three parts. In the introductory section, Ulrichsen clarifies that ‘most English-language reporting and analysis of the Gulf Crisis has focused on precisely those questions of regional geopolitics that have framed the standoff in terms of its impact on mainly Western interests in the Gulf’ (5). Instead, the book indicates an unfolded approach to the crisis, discussing ‘how Qatari decision-makers, and the citizens and residents of Qatar themselves, responded to the blockade with measures and initiatives’ (5).

The introduction establishes the book’s stance on the role of US policymaking in the crisis process, referring specifically to Donald Trump. Ulrichsen defines the presidency of Trump as ‘lacking any real sense of foreign policy’ (5) and ‘making the superpower vulnerable’ (5). Starting from the introduction, the book clarifies Trump’s impact on the Gulf crisis step by step, which was designed in a triangle by the President himself, his adviser and son-in-law Jared Kushner and the UAE’s and Saudi Arabia’s Crown Princes (MbZ and MbS, respectively), bypassing traditional tools of diplomacy (such as by discussing issues on WhatsApp) and blindsiding the rest of the decision-making team (namely, Rex Tillerson).

The 2017 embargo is displayed as a process that includes multidimensional tensions among the Arab Quartet states and Qatar. Three chapters in Part One are mainly devoted to informing the reader about the historical transformation of issues (‘Background and Context’), the initial manifestation of contradictory stances in 2013 and 2014 (‘The 2014 Rift’) and, finally, the eruption of the embargo (‘The Blockade’). Although the book is primarily addressing experts, scholars and students of Gulf Studies with its wealth of details, Part One can be an opening on to the topic for readers who are not as familiar with Qatar’s political history in illustrating nation-state formation processes, Qatar’s autonomy and regional tensions over resources and borders. This historical perspective helps the reader to understand how neighbour states (plus Egypt) reached a point of siege over Qatar in the current crisis. In addition, the succession of leaders and question marks over the young generation of rulers is touched on in this section (55), raising awareness of the potential complexities of leadership changes in the Gulf’s political future.

Part Two, positioned by Ulrichsen as the ‘backbone of this book’ (103), is dedicated to outlining the strategies and responses of the Qatari state towards the blockade in five main areas; Politics and Security; Economy and Trade; Energy and Infrastructure; Regional and Foreign Affairs; and Defense and Security. Each of these accounts of how the Qatari ruling elites have institutionally responded to the siege could form a book-length discussion alone; however, Ulrichsen adroitly summarises policies in these sub-fields, bringing together various sources on the siege, ranging from academic analysis, reports, news, online sources and interviews. Part Two therefore helps readers navigate information overload when it comes to understanding the crisis, integrating the list of thirteen demands proposed by the Arab Quartet states with Qatar’s strategies to overcome the embargo.

Chapter Four, ‘Politics and Society’, mainly depicts Qatari voices through reactions to the blockade regarding, firstly, state-level responses in official statements by the political elites and institutional responses canalised at international level through the National Human Rights Committee, the United Nations, the International Court of Justice, the Doha International Family Institute, the Council of International Civil Aviation and the World Trade Organisation. Secondly, the societal reactions of Qatari nationals and residents are combined with policies to manage the legitimacy aspect of the crisis. The iconic ‘Tamim the Glorious’ image of Sheikh Tamim by Qatari artist Ahmed bin Majed Almaadheed going viral and subsequently being drawn on solidarity walls is discussed as an example of raising public support for the Qatari state, despite the efforts of the Arab Quartet to sow internal unrest in the oil monarchy.

The ‘Economy and Trade’ section summarises how the Qatari state was taking precautions to decrease economic risks and financial volatilities by raising or re-directing investment incentives and restructuring trade routes. Domestic production is another aspect of the state’s strategies after the crisis, and this has not only motivated local entrepreneurs (like Baladna, the largest local dairy producer that has raised its production after the siege),  but has also provided social support with ‘Made in Qatar’ labels on local products (133).

Chapter Six, ‘Energy and Infrastructure’, shares an interesting detail on Qatar’s energy diplomacy and reactions to the blockade states. Ulrichsen states that the siege ‘left untouched the gas pipeline that ran between Ras Laffan and Taweelah in Abu Dhabi’ (165), although Qatar could decline its role in this energy collaboration (claiming force majeure) and put the Emirati state in a difficult situation in the middle of summer when the need for electricity is at its peak for air conditioning. Nevertheless, Ulrichsen remarks that this would be a collective penalty, including the residents of the UAE for an action conducted by the political elites, and would give further reason to the UAE to escalate the crisis; Qatar preferred not to approach policymaking based on ‘emotions’, the Qatari Foreign Minister stated.  The following part of the study brings a notable comment from the UAE’s Minister of State for Foreign Affairs, Anwar Gargash, on Qatar’s decision to not suspend joint energy projects: namely, because they are ‘commercial commitments with proper frameworks’ (166). The book thus properly presents the dilemmas and contradictions over the legal duties of the parties involved.

Chapter Seven, ‘Regional and Foreign Affairs’, illustrates striking examples of regional disagreements and alliances since the Arab Spring era. Ulrichsen argues that Qatar has been coordinating with the GCC countries to ease the tensions that erupted in 2013; however, Qatar’s bandwagoning to regional states did not prevent further escalation, which was also tied up in changing practices of power and influence in the region. While briefly assessing Qatar’s regional role as a small state or subtle power in comparison with the examples of Singapore and Dubai, the book mainly discusses its collaborative approaches with the Taliban, the US, the Israeli-Palestinian conflict (mainly in Gaza) as well as public diplomacy efforts (under the supervision of the Government Communications Office) and lobbying.

The last chapter for the assessment of Qatar’s state-level responses to the siege is on ‘Defense and Security’. This primarily represents how Qatar is strengthening existing cooperation with Western powers, while diversifying its military cooperation through new ties with countries like Turkey, Russia and China and through improving its national defence industry (for instance, Barzan Holdings is a national company under the supervision of the Ministry of Defence that is empowering national military capabilities).

The final chapter, ‘Looking Ahead to 2022’, problematises Qatar’s road to hosting the FIFA World Cup 2022. This primarily focuses on Qatar’s initiatives to manage challenges posed at the international level for its status as host. The launch of the Saudi sports channel beoutQ as a rival to the Qatari BeIN sports, the lobbying against Qatar’s hosting, Qatar’s responses to hostile media outlets and issues of labour rights and the kafala system (a sponsorship system that determines the relationship between employers and migrant workers) are all highlighted in this part.

As a minor note, the book’s knowledge-intensive approach could be extended by further theorising of the issues surrounded the Gulf crisis of 2017, as the literature is in need of such conceptualisation.  Intra-state rivalries and the diverse political stances of the member states of the GCC are central in discussing the nature of the Gulf’s controversial political strain. Nevertheless, the processes of the Gulf crisis could be elaborated through theoretical approaches relating to regionalism, the leadership crisis and the construction of distinct hegemonies in the Gulf.

Ulrichsen aptly states his position regarding the end of this unanticipated regional crisis, writing that ‘the blockade is more likely to recede gradually into the background rather than end with a formal announcement or deal’ (253). Ulrichsen further portrays the impact of nationalist discourses among the leaders of Abu Dhabi and Saudi Arabia and how the use of ‘venomous media and social media’ (255) to represent this narrative in the region ‘complicates the repairing of fractured regional relations within the crisis’ (255). The closing remarks of the book emphasises how the ‘unorthodox presidency of Donald Trump’ also triggers controversial aspects of the fragile Gulf politics, escalating regional tensions and vulnerabilities.

Ultimately, Ulrichsen has written an essential book for anyone who is looking for an entry into the Gulf crisis or for a comprehensive read on this regional tension. Perhaps the most valuable contribution of the study is its nuanced understanding of contested regional issues that have led to the crisis and its conceptualisation of all the overwhelmingly detailed processes of the siege. Qatar and the Gulf Crisis does not aim to bring new ideas to the embargo, but rather to clearly present a compelling and consistent summary of abundant information, which the book certainly achieves.

Betul Dogan Akkas is a PhD candidate in the joint degree programme between Qatar University Gulf Studies Center and Durham University School of Government and International Affairs. She obtained her MA degree with the thesis titled ‘Securitization of Qatari Foreign Policy’ at Qatar University. Dogan Akkas completed her BA in International Relations at Bilkent University. Her research interests include foreign policy making, security and social transformation of the Gulf Countries.