In Slipping Loose: The UK’s Long Drift Away from the European Union, Martin Westlake takes a long-term view of the result of the 2016 UK referendum on EU membership, showing it to be less a shock decision than the consequence of historical choices that led to the gradual slipping of ties between the UK and the EU. All future work on the 2016 referendum should reference this book, writes Jake Scott. 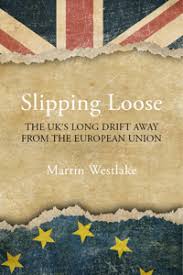 The vote by the United Kingdom to leave the European Union on 23 June 2016 came as a shock to the global community – or so the story goes. But was the result truly a surprise, or was it a foregone conclusion? The rush to explain the decision by academics ranged from global perspectives (such as Roger Eatwell and Matthew Goodwin’s National Populism and John Judis’s The Populist Explosion) and those at the national level (David Goodhart’s The Road to Somewhere) to the close analysis of ethnographers (Geoffrey Evans and Anand Menon’s Brexit and British Politics). Curiously, this wide range of analysis had a glaring gap – the perception of the institutional relationship between British politics and politicians and the EU (and, most importantly, its constituent parts). Martin Westlake’s new book Slipping Loose: The UK’s Long Drift from the European Union has sought to correct this.

As a preeminent documenter of the developments of the EU (his own research occupies nearly a whole page in the bibliography), Westlake is well-positioned to take on this daunting task. More than any other analysis of the 2016 referendum thus far, Westlake has attempted to explain developments and trends on both sides of the English Channel, cataloguing the path-dependency of each institution (insofar as British politics can be called a singular ‘institution’) and the reception by the other. Furthermore, the perspectives adopted in previous analyses were often described as long-term, but typically only looked as far back as a few decades – conversely, Westlake begins his story in the 1880s.

The overall argument of the book is that, rather than being a foregone conclusion or an unforeseeable shock, the result of the 2016 referendum became more and more likely as a consequence of choices, made both out of necessity and voluntarily (32), until settling ‘the Europe question’ by referendum was seen as the only viable option. Most significantly, Westlake tackles two presumptions: the aforementioned belief that holding a referendum at all was inevitable; and the assumed ‘shock’ of the result.

Each chapter attempts to break down these causes into, respectively: (1) political/constitutional drifts (in the United Kingdom); (2) economic crises, questions and clashes, specifically between the pound and the Eurozone; (3) the integrationist strategy of both the foundations of the EU and conscious choices made by actors; (4) the clear absence of consensus in the British polity on what sort of relationship was desired with the EU; (5) the declining presence of British people in the burgeoning European civil service; (6) the emergence and subsequent discarding of the Spitzenkandidaten (‘lead candidate’) procedure; (7) and, finally, the increasingly frequent question of what the British public truly thought of the EU. This pedagogical structure of the book is exemplary, with each chapter referencing back to previous revelations and conclusions to explain why, ever since the 1970s, Britain’s approach (or lack thereof) to the idea of a unified Europe led eventually to the decision to Leave.

Though the entire book is rich in value, it is the first chapter that deserves close attention. As above, the ‘looming prospect of a referendum’ is the subject of Chapter One, and Westlake is at pains to show how the tool of a referendum for settling significant constitutional questions in the British polity is not so alien a prospect as some contemporary commentators presume. Indeed, citing Vernon Bogdanor, the flirtation with referenda on constitutional vagaries dates as far back as the third Reform Act of 1867 as a means of overcoming the increasing tribalism of party politics with a ‘direct appeal to the people’ (7-8).

However, the sharp turn away from such reformist attitudes came in the post-war settlement which, as Westlake shows, was marked by the experience of totalitarianism to such an extent that Clement Attlee called the referendum ‘the instrument of Nazism and Fascism’. Perhaps this is the ‘long-term’ most commentators have in mind, but it is a strength of Westlake’s analysis that he shows a deadlocked party system in the early 1970s (not unlike today) increasingly toying with the idea of a referendum to settle a clearly irresolvable issue which, once the referendum became an option, evolved continually until the 1997-2001 UK Parliament intentionally decided the constitutional definition of what a referendum actually is. The reflexive movement of a referendum in relation to the constitution is what really matters here: too many analyses of the Leave vote have been concerned only with the British-European relationship; Westlake aims to show how internal developments in British politics made strategic planning for this relationship difficult.

Indeed, throughout the text it becomes clear that whilst many post-war constitutions on the Continent implicitly assumed the reality of a European project in the reconstruction of polities, the British never had such clarity. Always the indecisiveness, both at home and abroad, would linger in the minds of British politicians and civil servants (70-71). What is most impressive is Westlake’s deluge of statistics, tables, graphs and trends – as well as the perceptions of those trends – throughout, especially in Chapter Seven, ‘The People’.

A number of clear issues present themselves in the book, however. The first is, given the salience of the issue, the glaring absence of a discussion on populism is striking: indeed, the word is not even referenced in the index, though it does appear on occasion in the text. For a book on Brexit to not engage with this burning question is clearly a strategic choice: Westlake is, for better or worse, attempting to rise above the topic of the moment and present a lasting analysis. I believe he has, but I do wonder if his deliberate distance from the question of populism will serve his book well in the immediate climate.

The second issue is that of depth – but only in places. Obviously, the sheer scale of Westlake’s undertaking is considerable enough, and the ability to observe and comment on trends that occur over decades, never mind years, is extraordinary. However, Chapter Four on the spectral presence of British MEPs in the European Parliament feels rushed and brief in comparison to the seeming importance of that ‘absent presence’ that the chapter emphasises, especially in regard to how each political party responded to the introduction of proportional representation. Similarly, in Chapter Five, Westlake spends time considering the cultural influences in each nation and how this shaped their approaches to the burgeoning European civil service, especially regarding legalism and bureaucracy, but does not really expand on them, given the marked distinction between the common law and civil law traditions (112).

In consideration, this book undoubtedly joins a growing literature attempting to show that, though the 2016 vote might have been a shock to those in the moment, it probably should not have been. More than any other book in this field, Slipping Loose goes into the long-term trends to explain the confluence of factors and the divergence of opinions and attitudes in the relationship between the UK and the EU. All future work on the 2016 referendum should reference this book, or risk losing out otherwise.